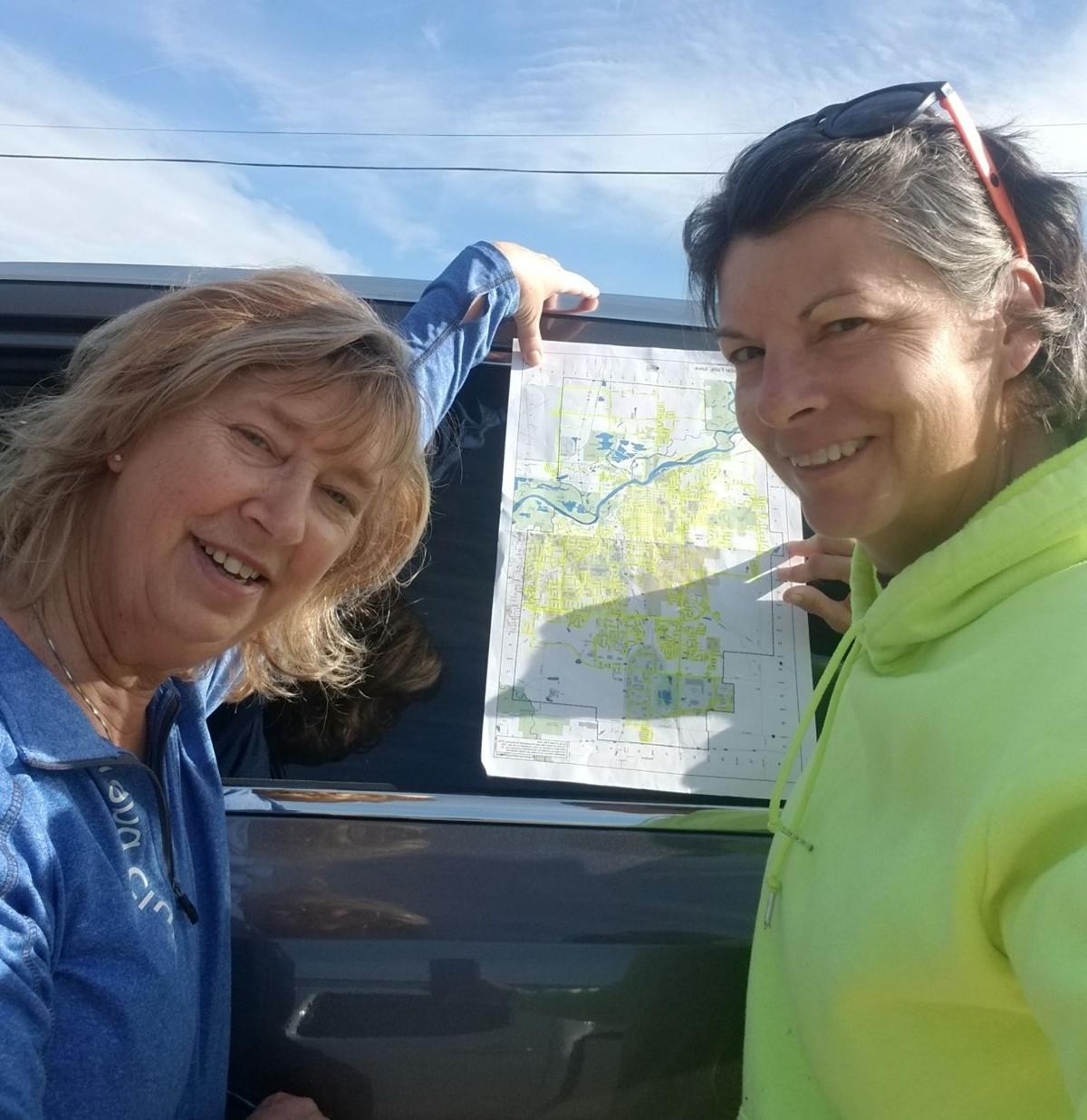 Bonnie Wetzel, left, and Sara Jansen hold up the street map of Cedar Falls they used to highlight their walking progress in 2020. 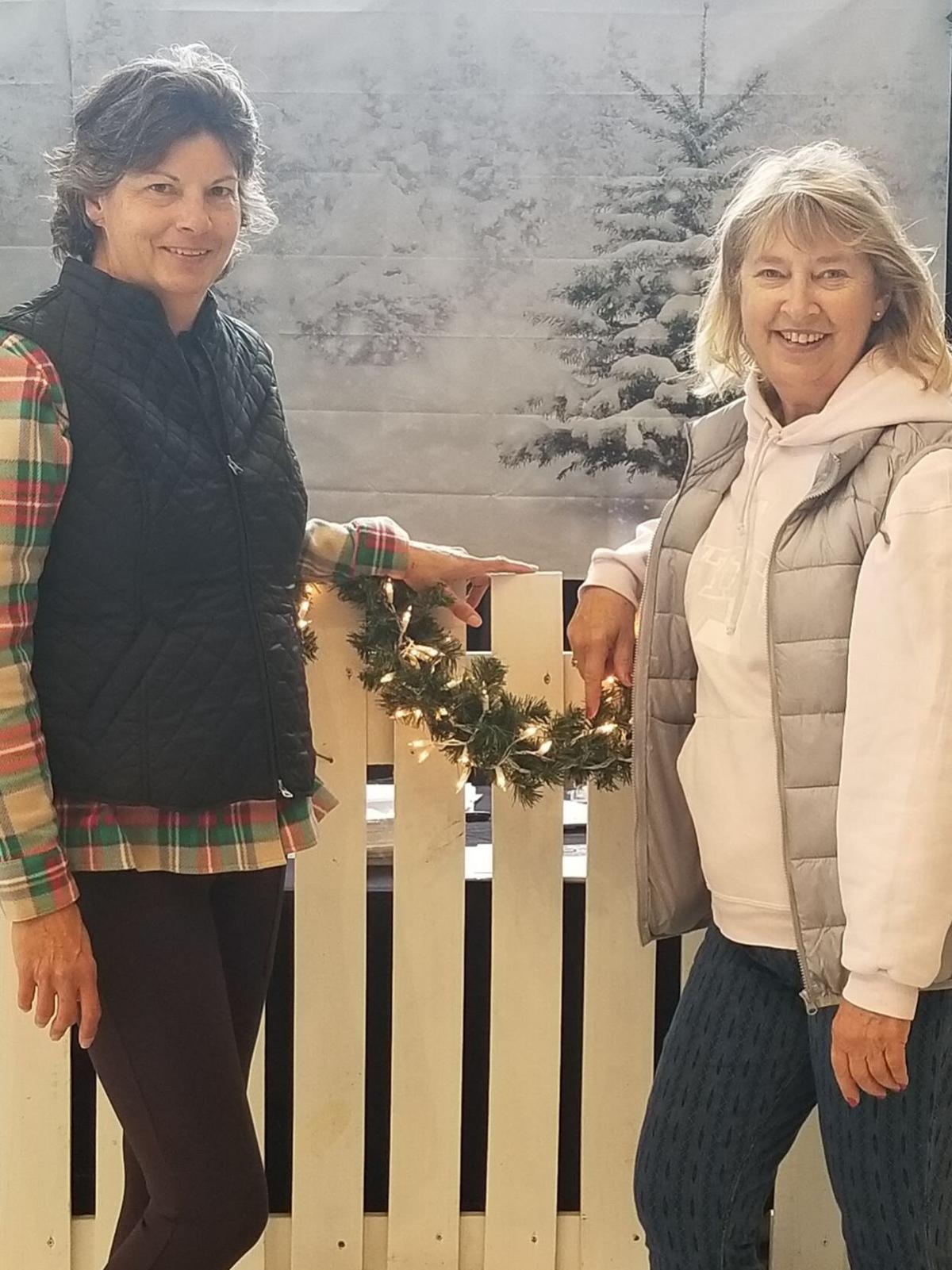 Sara Jansen, left, and friend Bonnie Wetzel were inspired to walk all the streets of Cedar Falls after reading a Courier article on a couple who drove all of the city's streets during the pandemic. They completed it in under eight months, walking between three and seven miles per day, three to four days per week.

CEDAR FALLS — Sara Jansen and Bonnie Wetzel are used to getting out and about.

When the coronavirus pandemic descended upon Iowa in March, the two friends — who met while volunteering at the Cedar Valley Arboretum and through a master gardeners program more than a decade ago — found they couldn’t meet up like they used to.

“Shortly after the middle of March, everything went crazy,” Jansen said.

After about a month, the two were going stir crazy themselves. So they decided to make it a habit to meet up regularly and go for walks, starting with Cedar Falls’ recreational trails. They quickly ran through them.

Then, at the beginning of May, they read a Courier article about Cedar Falls couple George and Sandy Glenn, who drove all 226 miles of streets in the city.

“So we were walking one day and we said, ‘This is getting boring — we’re walking the same old thing all the time,’” Jansen recalled. “I said, ‘Heck, why don’t we do the thing like the couple did? ... And let’s walk.’”

Wetzel was game. The pair walked between three and seven miles, three to four days of the week, eventually tracking those miles on their FitBits.

They walked in 90-degree heat and freezing, snowy weather alike. Jansen wore out three pairs of shoes on the journey.

The two began highlighting their walking routes on a small map of the city they found in the city’s Currents magazine, and eventually procured a larger map from City Hall.

“It’s kind of fun looking at all these streets that you walk,” Wetzel said. “After a while, it really adds up.”

They started downtown, walking the streets north to south between First Street and University Avenue. Then they hit the University of Northern Iowa’s campus streets, and kept working their way farther and farther out to the city’s north, south, east and west boundaries.

Along the way, they marveled at the architectural differences between the older Victorian homes in the center of the city and the newer construction at the borders; learned Cedar Falls has six mobile home parks, hidden city parks and companies they hadn’t heard of in the industrial park; and discussed the varied gardens and landscaping everywhere they went.

“We noticed that a lot of people were doing raised gardens this year, probably due to the pandemic,” Jansen said.

“Those streets are very interesting,” Jansen said of the residential areas around Hartman Reserve. “They curve around, up and down in the valley we have along the river.”

Because of the lack of sidewalks in some places near busy streets or intersections, the two weren’t able to walk every inch of city streets. But they estimated they walked between 250 and 300 miles in around seven and a half months.

They completed Janesville’s 13 miles of streets in two days, then went back to walking Cedar Falls late last year to see the houses and yards lit up with Christmas lights.

Jansen, who in the winter lives in The Villages in central Florida, has taken to walking the streets there, “which I’ll never, ever finish,” she said of the sprawling, three-county retirement community.

Wetzel, who visits her sister for a few weeks each winter on Marco Island in southwest Florida, walks the beaches, noting Marco Island was “not that big.”

The two are tentatively planning their next walking adventure.

“Somebody asked us, ‘Is Waterloo next?’ And we said, ‘Well, we’ve already done some of Waterloo, ‘cause you can’t tell’” where the city boundaries are in some cases, Wetzel said.

Both like the idea. Wetzel, a former Waterloo East High home design teacher, particularly likes the idea of finding the older homes in Prospect, Highland Park and around the old Rath Packing plant.

“I’d say it was a great way to spend our time that we normally would have been doing other things, volunteering that we couldn’t do,” Jansen said. “It’s great to be outside. We got lots of exercise, and lost a little bit of weight.”

CEDAR FALLS — When a frequent critic of city government spoke out against business tax exemptions Monday night, the mayor and council decided …

A council member called for the state fire marshal to investigate the way that Cedar Falls firefighters assisted at a fire in Dike last month.

Australia lost one-third of its koalas in three years

CEDAR FALLS — When your mission statement is to assertively create fulfilling lifestyles, employees go the extra mile to make sure residents e…

Tea, anyone?  Kids can enjoy a tea party at home with the Grout Museum's 'Tea Party To-Go' kit with tea, activities, supplies and a link to a video tea party and demonstration.

The Cedar Valley remains under a winter storm warning following a night of major snowfall.

Some on CF council not happy with complete streets policy

At least two Cedar Falls City Council members aren't happy with a street construction policy update from 8 years ago, while the rest of the council thought the entire discussion was a waste of council and staff time.

Bonnie Wetzel, left, and Sara Jansen hold up the street map of Cedar Falls they used to highlight their walking progress in 2020.

Sara Jansen, left, and friend Bonnie Wetzel were inspired to walk all the streets of Cedar Falls after reading a Courier article on a couple who drove all of the city's streets during the pandemic. They completed it in under eight months, walking between three and seven miles per day, three to four days per week.