C.F. native to appear on ‘Dirty Jobs’
2 comments
Share this
{{featured_button_text}}
1 of 2 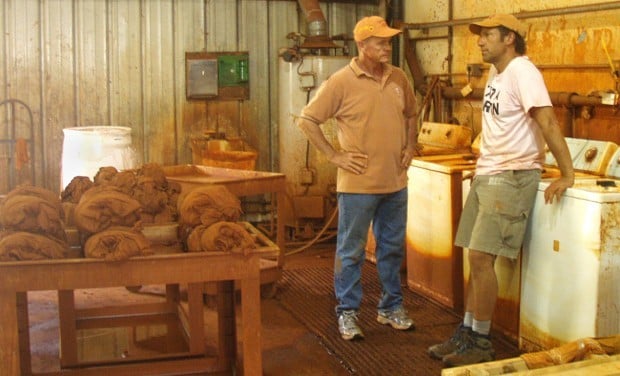 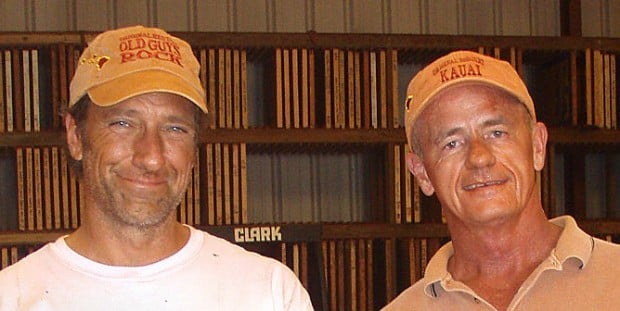 But the Cedar Falls native's real payoff from an appearance on the Discovery Channel's "Dirty Jobs" came late in the day host Mike Rowe came to Hawaii to shoot the program.

Rowe asked Williams if there was anything else he could do for him. The open-ended request met with a quick answer from Williams to call his good friend from high school.

So Rowe picked up a phone and called Darrel Ackerman in Cedar Falls, and Williams had secured his bragging rights.

Williams grew up in Cedar Falls and graduated from high school there in 1972. He went off to school at Arizona State University and made Mesa, Ariz., his home after that. He worked through a number of business ventures, eventually settling on screen printing and selling specialty T-shirts.

He has retail shops in Arizona and Kauai, Hawaii. It was the Hawaii-based business, Dirt Shirts, that drew the attention of the cable program.

Dirt Shirts uses the reddish dirt from the island to dye T-shirts. They wind up a burnt orange color similar to the Texas Longhorns' team colors.

Williams is a fan of the show. He's also always thinking of ways to improve his business.

Then a call came from out of the blue asking if he would be interested in having his business featured on the show. Williams had to say he'd call them back; he thought it was a prank.

When Rowe came out to record the show, he threw himself into producing the T-shirts. The dirt shirts are made by putting a few scoops of dirt into the washing machine, adding the T-shirts and letting them go. Williams found Rowe revels in getting dirty on the job and doesn't let any of his crew get off stain-free, either.

"He's a legitimate nice guy or else for 10 hours he just fakes it," said Williams of his time with Rowe.

As far as "Dirty Jobs" go, the T-shirt business hardly measures up to some of Rowe's other stints - for example, maggot farmer, diaper cleaner or owl vomit collector, all jobs that have been featured on the show.

On each episode, Rowe takes on a day at a job, the dirtier the better, and a crew films his experience. He adds some humor to his insights into the job.

Rowe is noted as a champion of the working man and woman and defender of the skilled trades. He asked Williams about setting up a business deal to make dirt shirts for use by his company and foundation.

Without having to work at either, Williams got both his wishes in appearing on "Dirty Jobs" and working out a business deal with the host and producer. And with help from the call to Ackerman, Williams will have a ready-made conversation for the next time he returns to Iowa for Sturgis Falls.

A Discovery Channel representative said the Dirt Shirts episode is scheduled to air in late November or early December.

The latest marriage and divorce filings.

One person was detained when it ended.