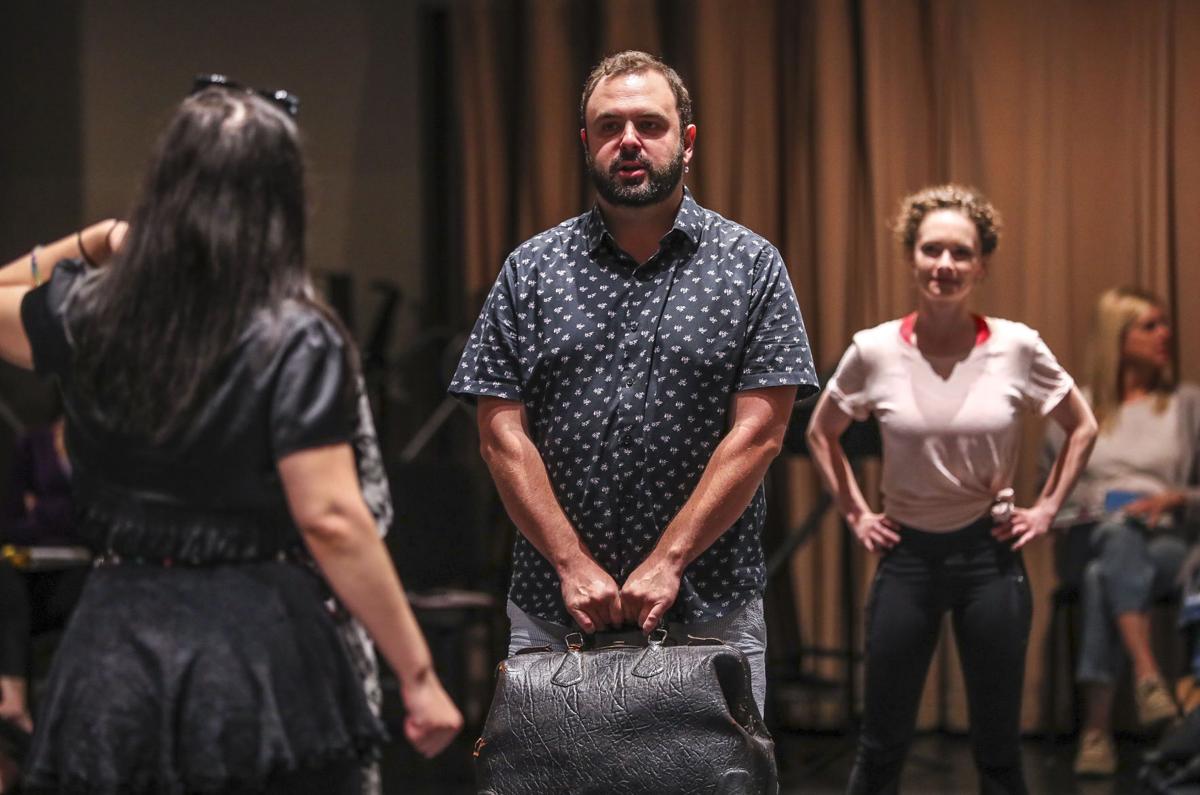 New York-based actor and Waterloo native Joel Waggoner, center, is given pointers by director Rachel Klein, left, during a rehearsal of “The Suffragist" at the Gallagher Bluedorn Performing Arts Center at the University of Northern Iowa on Thursday. 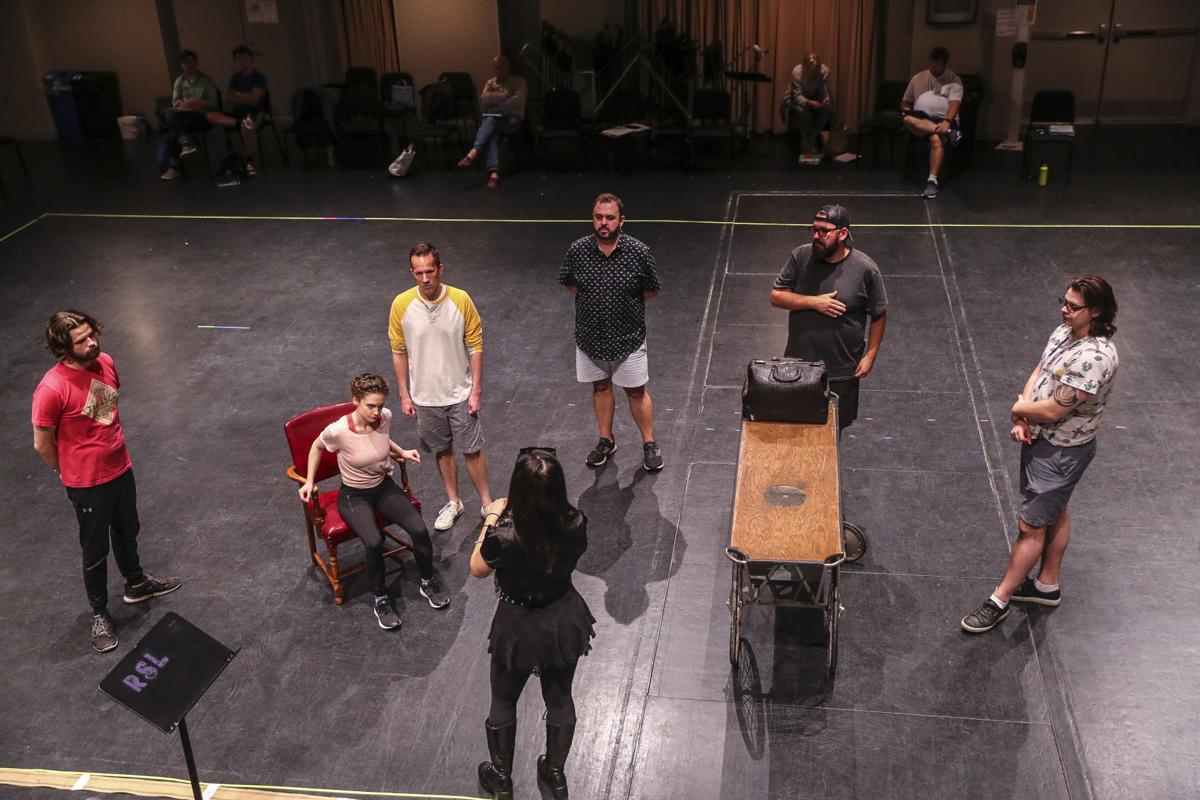 Cast and crew rehearse staging of a scene from “The Suffragist" at the Gallagher Bluedorn Performing Arts Center at the University of Northern Iowa on Thursday. 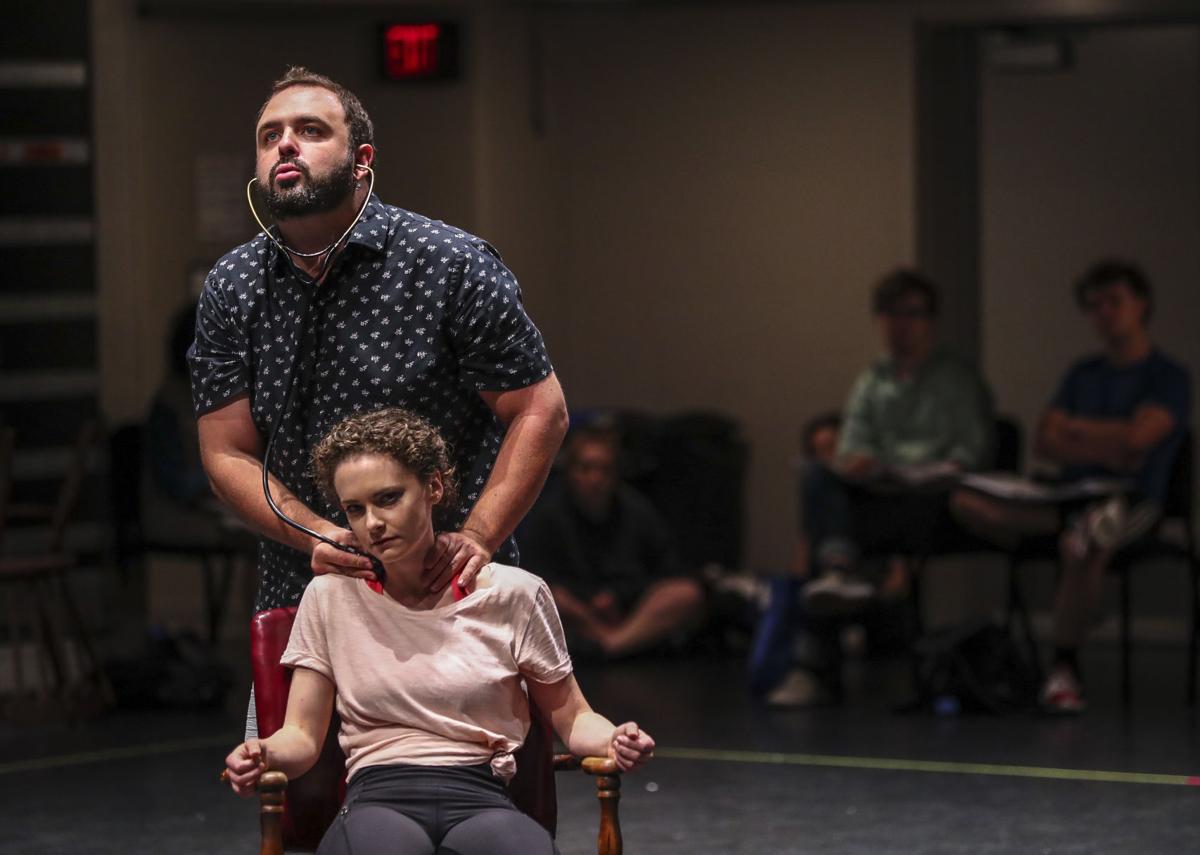 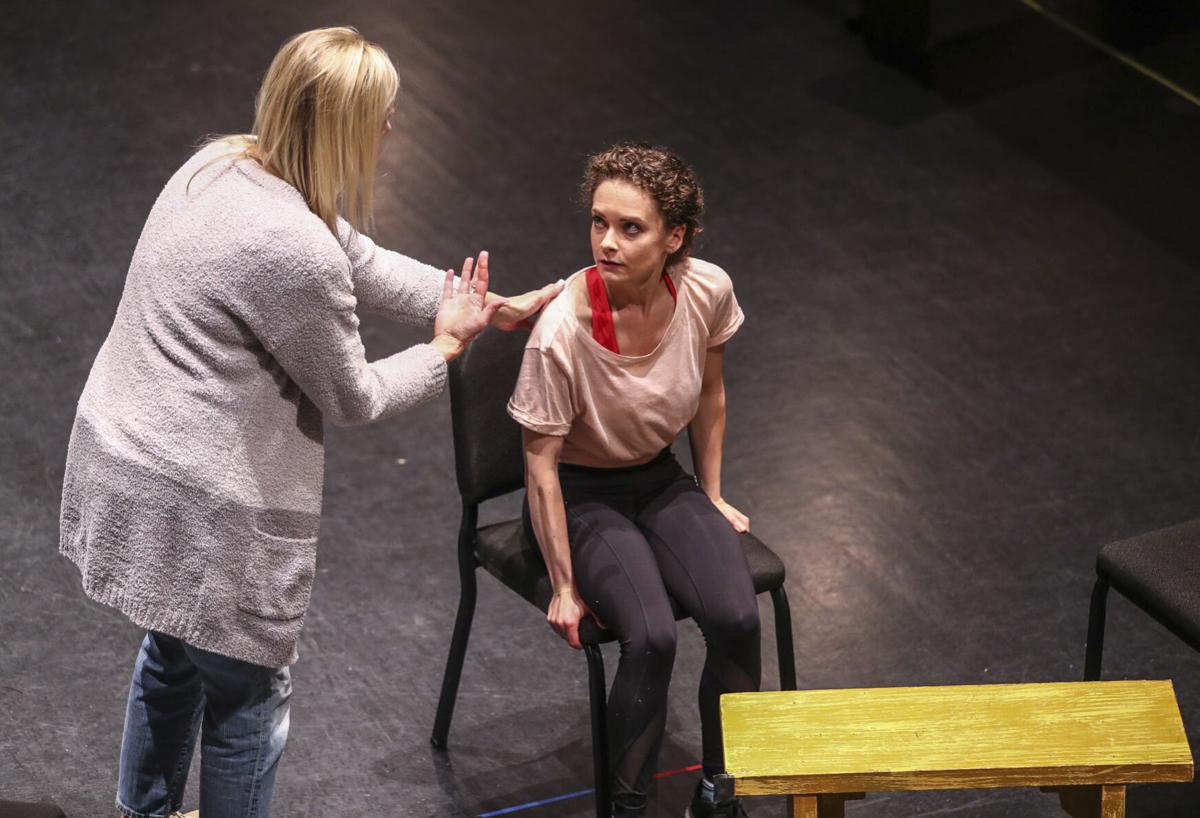 Broadway actress Cathryn Wake rehearses Thursday for the Gallagher Bluedorn Performing Arts Center's production of “The Suffragist" at the University of Northern Iowa. 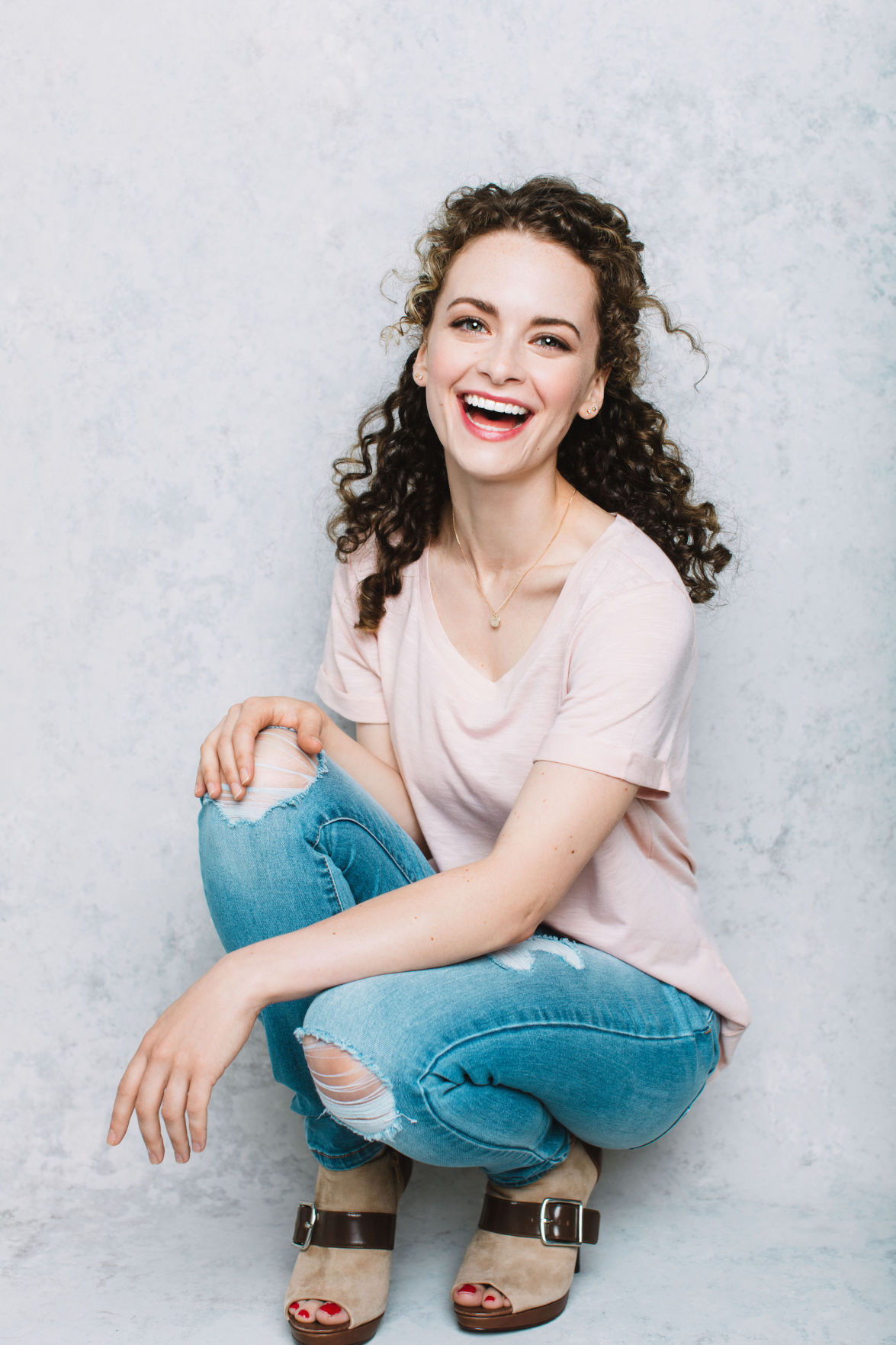 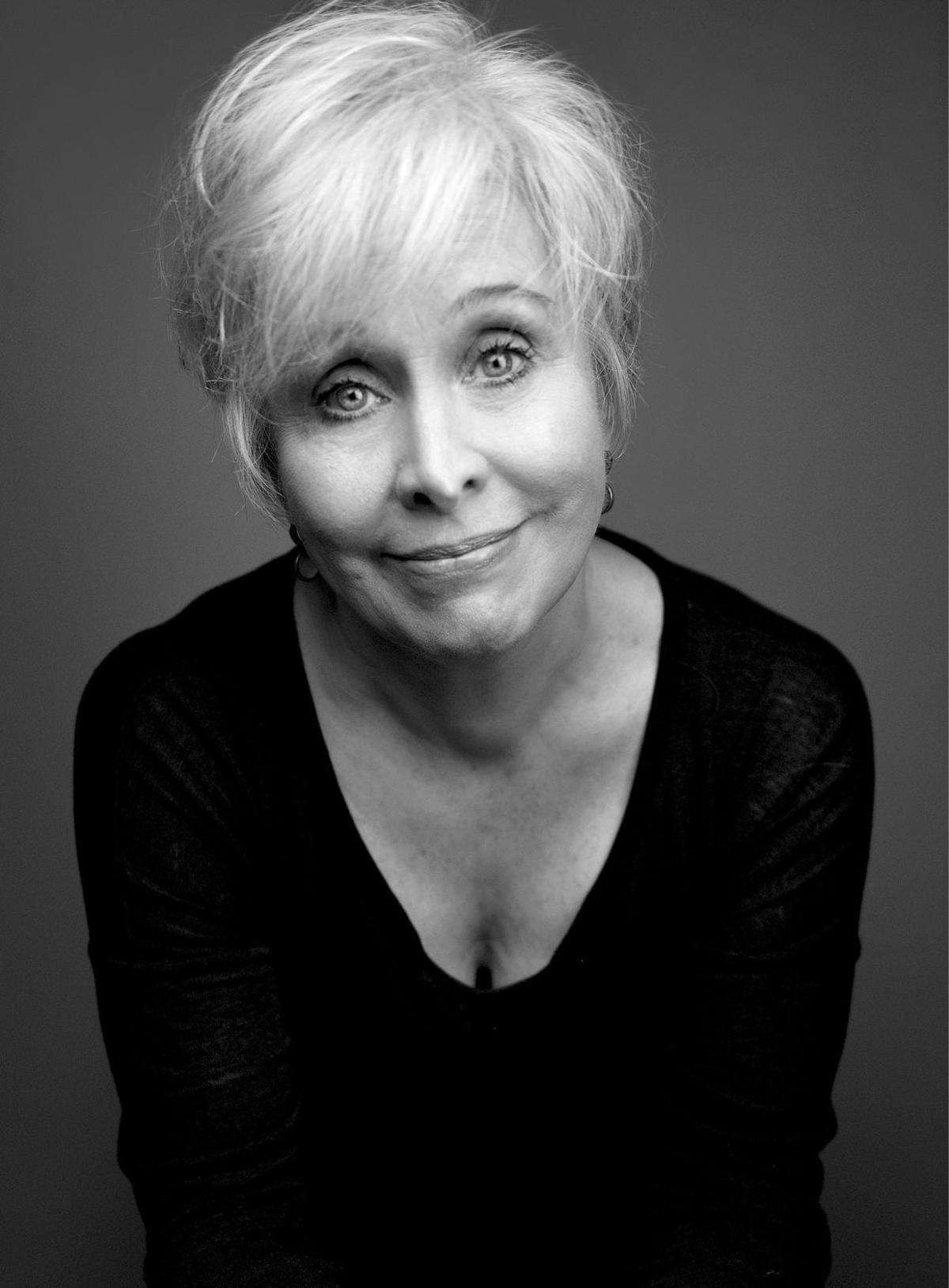 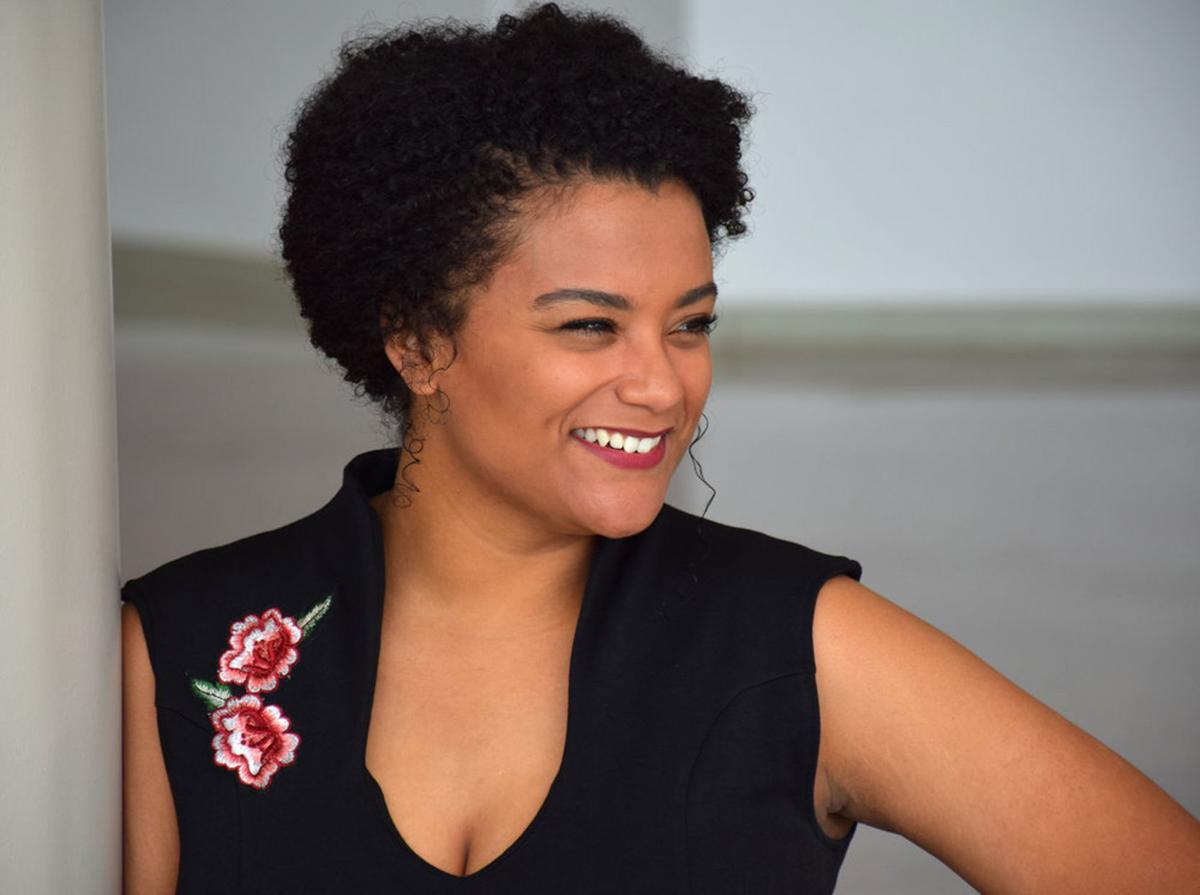 CEDAR FALLS – Cathyrn Wake can hardly wait for the curtain to rise on the world premiere of “The Suffragist.”

The musical opens Friday and runs through Sunday in the Great Hall at the Gallagher Bluedorn Performing Arts Center on the University of Northern Iowa campus.

“Oh, my gosh! I’m excited,” enthused the Broadway singer/actress. “Theater is one of the last industries able to get back to work after COVID.”

Broadway has been dark since March 2020. Some shows are reopening this summer, but the majority won’t be on the boards until September.

“Outside of clever Zoom readings and video, there is no way to do theater in a pandemic, not the way we love doing theater – sitting in the dark with a bunch of strangers collectively experiencing something brand new,” Wake said.

“The Suffragist” follows Carrie Chapman Catt — who grew up in Charles City and directed the National American Woman Suffrage Association — Alice Paul, Ida B. Wells, Lucy Burns, Inez Milholland and others as they fought to pass the 19th Amendment.

Wake, who made her Broadway debut in “Natasha, Pierre and the Great Comet of 1812” and has been in numerous stage and TV productions, described Alice Paul as a “formidable character. I’m very inspired by her single-mindedness. She stopped at nothing to work toward the goal of women’s suffrage.”

Paul worked with Catts, but wanted to lobby Congress for a constitutional amendment rather than take a state-by-state approach favored by NAWSA. Paul broke away and formed the National Woman’s Party and later Congressional Union for Woman’s Suffrage, organizing parades and pickets. In 1917, Paul and more than 1,000 “silent sentinels” began an 18-month picket at the White House.

“I can relate to her single-mindedness. I personally had a single-minded determination to get back to work. I’m filled with gratitude for this opportunity. I’m grateful to be working when so many of my colleagues are out of work,” Wake said, who sings throughout the show.

“Nancy Hill Cobb has written a beautiful score, and Cavan Hallman has supplied wonderful lyrics, and we have an incredible ensemble full of amazing voices. Hearing those collective voices resonating in the hall gives you goosebumps.”

One of those voices is New York opera singer and Waterloo native MaKayla McDonald. The soprano, a West High School and UNI School of Music graduate, will play Ida B. Wells.

Wells, who was born into slavery in 1862, became a journalist, activist and suffragist in the late 19th and early 20th centuries. She founded the National Association of Colored Women’s Club, addressing civil rights and suffrage. Often ostracized by white suffragists, she also endured death threats and ridicule from the public.

“I want to honor who this woman was — incredibly smart, tenacious and perceived as being unafraid and relentless in her journey for equity and her right to exist. She urged suffragists to consider the Black point of view,” explained McDonald, who also played Harriet Tubman in the New York Utopia Opera premiere of “The Story of Harriet Tubman,” among other roles.

Her songs in “The Suffragist” feel like “show-stopping, big vocal moments. I’m singing long, dramatic lines — so intense.” Her songs include a duet with Wake, as well as a gospel-leaning piece and the finale.

“I’m so incredibly happy to get to do what I love again and to come back home and give back a little of what my community has given to me,” McDonald said.

Interview with Nancy Hill Cobb and others working on the musical, 'The Suffragists.' David O'Shields had been commissioned by the University o…

'Silver Lining' is a new album featuring three Iowa groups and musicians from across the country. Mastered by Catamount Studio's Travis Huisman, the LP is for the COVID-related Artists Relief Project.

“It’s a magical evening in the rose garden. We string up lights and will have live music, finger food paired with different wines, and guests can explore the gardens.”

"It’s important not just for the Black community but the community as a whole to see this level of excellence."

While loan servicers are responsible for contacting graduates, the University of Northern Iowa has been working with current students and recent graduates to understand what the freeze’s end means for them.

New York-based actor and Waterloo native Joel Waggoner, center, is given pointers by director Rachel Klein, left, during a rehearsal of “The Suffragist" at the Gallagher Bluedorn Performing Arts Center at the University of Northern Iowa on Thursday.

Cast and crew rehearse staging of a scene from “The Suffragist" at the Gallagher Bluedorn Performing Arts Center at the University of Northern Iowa on Thursday.

Broadway actress Cathryn Wake rehearses Thursday for the Gallagher Bluedorn Performing Arts Center's production of “The Suffragist" at the University of Northern Iowa.