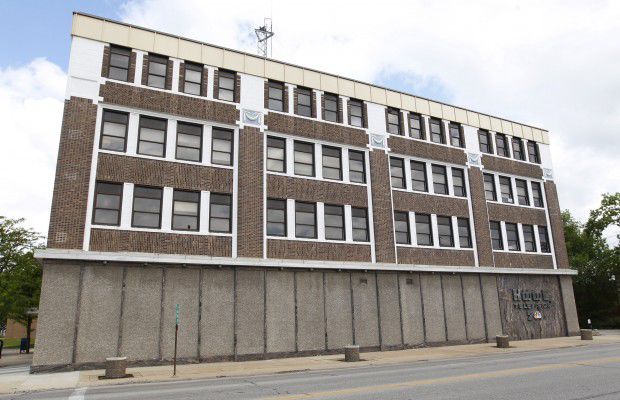 The KWWL building at East Fourth and Franklin streets. 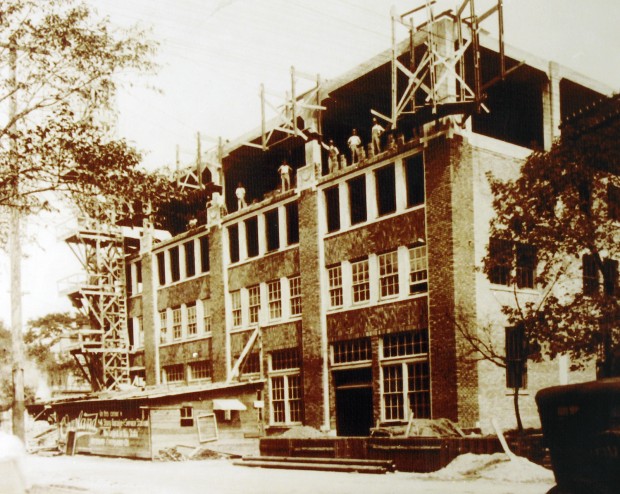 The KWWL building from the early 1900's. (courtesy photo) 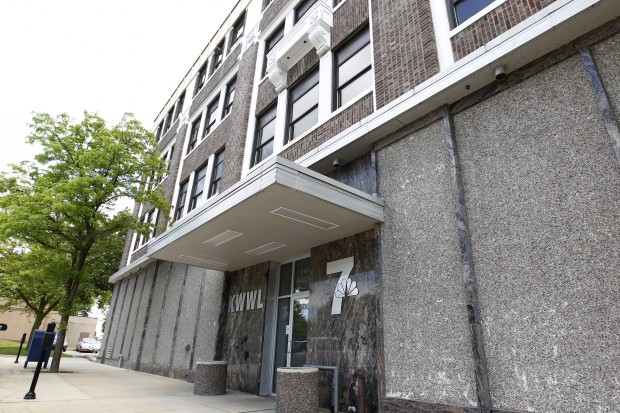 Major renovation are store for the KWWL building including removing the panels along 4th Street and Franklin Street and replacing them with glass like the building originally had, photographed Thursday, June 6, 2013, in Waterloo, Iowa. (MATTHEW PUTNEY / Courier Photo Editor)

Members of the Waterloo Historic Preservation Commission Tuesday passed resolutions supporting the creation of a commercial historic district on the west side of downtown and adding the current KWWL Television building to the National Register of Historic Places.

"A lot of this is keyed off the early development of automobile culture in Waterloo," said David Deeds of JSA Development.

The Overland Waterloo Company Building, which has been home to KWWL since 1958, was originally constructed in 1916 as a multi-story automobile distributorship. Many of the structures in the planned west downtown historic district were automotive garages and dealerships.

JSA is renovating buildings in the proposed west-side district and is serving as a consultant to secure federal historic tax credits for a renovation of the KWWL building. Recognition on the federal register helps projects receive the investment tax credits.

"This is driven so we can get the historic tax credits and move the project forward," Deeds said. "It's an important economic development situation for the city."

Quincy Newspapers Inc., which owns KWWL, is planning to invest at least $2.5 million to renovate the building at 500 E. Fourth St. Receipt of the historic tax credits would ensure the building's exterior is returned largely to its original look, with large showroom windows on the first floor.

The Iowa State Historic Protection Office already has approved the first phase of the renovation, which would begin after the federal tax credits are awarded. KWWL would occupy the first two floors of the four-story building.

The Louis Berger Group Inc. of Kansas City, Mo., completed detailed surveys of both the KWWL building and west downtown districts which are being used to document the qualifications for federal register.

"The Overland Waterloo Company Building is significant in the area of commerce for its association with the distribution network of Overland automobiles and the growth of auto-related businesses in Waterloo during the early 20th century," the report stated. "The building is indicative of the nationwide trend of automobile manufacturers building large structures in prominent downtown locations to inspire confidence in their product."

Louis Berger also found enough historic fabric to identify the west-side historic district as an area including the 200 and 300 blocks of West Fourth, the 300 block of West Fifth Street and the 600 block of Jefferson Street.

While many of the buildings in the West Fourth and Bluff street area were hotels and service industries supporting a railroad depot in the late 1800s, the West Fifth buildings housed 1920s era auto-related businesses.

A federal grant received after the 2008 Cedar River floods helped pay for the survey that uncovered the west-side historic district.

"Eight years ago some people didn't believe we could get a (historic) district at all on the west side," said Deeds.

The only Waterloo historic district recognized on the National Register of Historic Places was the Highland neighborhood until a downtown east-side historic district — funded privately by JSA — was designated in 2011.

The state is expected to review the KWWL and west-side historic district requests in June. Pending approval, they will be forwarded to the National Park Service for a final determination.

Unlike local historic designations, property owners in the proposed west-side district would not need approval or have to meet historic guidelines in renovation projects unless they are using tax credits.

There were no public objections to the creation of the district during a hearing before the Historic Preservation Commission's vote.

Recipients this year are JSA Development, for the Brown Derby Ballroom renovation; Lee Byrd, for the restoration of her historic house; and the city, for the RiverLoop Public Market project.

A social time starts at 6 p.m. with the awards ceremony at 6:30 p.m. It is free and open to anyone wishing to attend.

The KWWL building at East Fourth and Franklin streets.

The KWWL building from the early 1900's. (courtesy photo)

Major renovation are store for the KWWL building including removing the panels along 4th Street and Franklin Street and replacing them with glass like the building originally had, photographed Thursday, June 6, 2013, in Waterloo, Iowa. (MATTHEW PUTNEY / Courier Photo Editor)