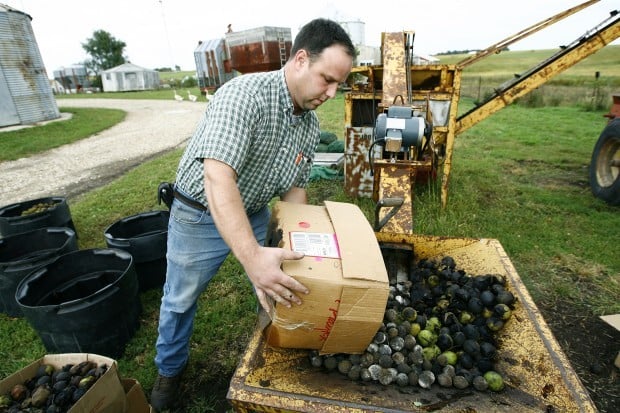 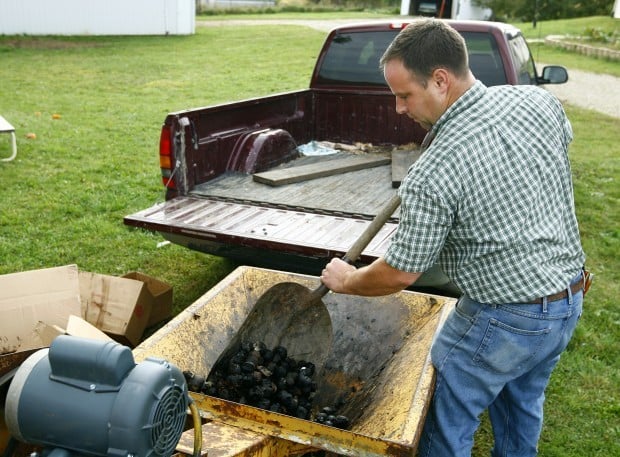 Eric Werner uses a shovel to move black walnuts into his walnut huller after a customer dropped them off Wednesday, Sept. 23, 2009, in Toledo, Iowa. (MATTHEW PUTNEY / Courier Photo Editor) 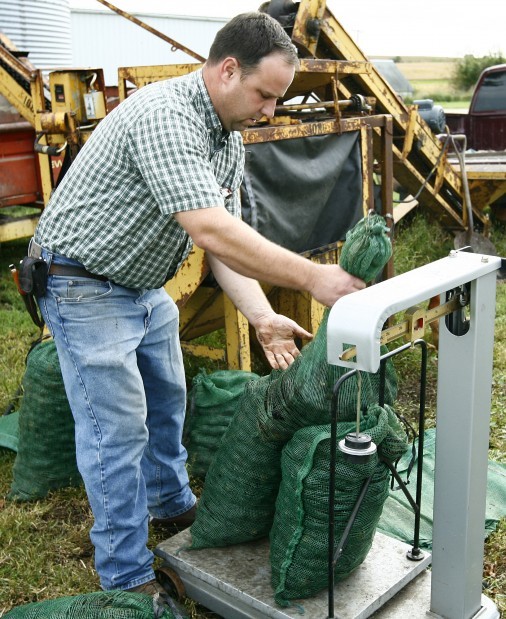 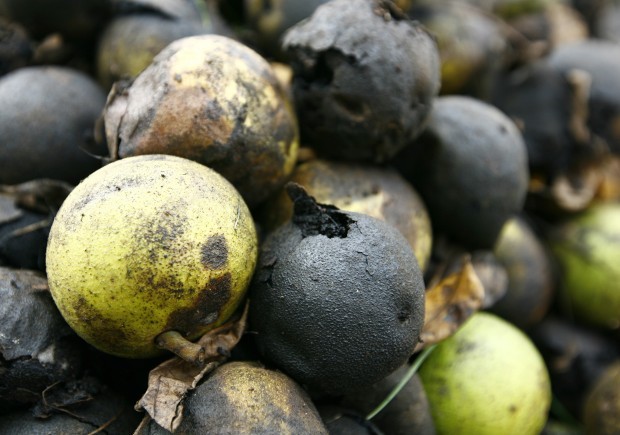 TOLEDO - There's money laying in yards, and many people don't even know it.

Eric Werner of rural Toledo, who buys black walnuts for Hammons Products Co. in Missouri, said a few good-producing trees can be a money maker. Hulled nuts are worth $8 per hundredweight.

On average, Werner said, a pickup load is worth between $80 and $120. He will pay cash on delivery.

"I'd say there's more (walnuts) being wasted than being used. It's still a secret," Werner said, referring to their cash value.

Todd Derifield, Waterloo city forester, said there are a few thousand walnut trees in the city limits and thousands more in the county. In Northeast Iowa, nut processors say they're common.

Picking up walnuts is a fall tradition before people mow and to keep yards looking nice. Walnuts often end up in landfills, city yard waste dumps or in ditches.

To Brian Hammons, president of Hammons Products, that's a waste. The meat inside the hard shell is in demand for cooking and as ice cream topping. Last year, the company processed 38 million pounds, its third largest crop ever.

Typically, he said the walnut harvest starts Thursday and lasts through the fall. Hammons has 260 buying stations throughout the Midwest, though Werner is the only one in Northeast Iowa.

"You can make a lot of money. I see a lot of nuts out there," Hammons said.

Ample moisture and temperate weather made for good growing conditions.

Hammons said collecting and selling walnuts is an excellent fundraiser. Families also consider it a good way to make some extra cash. Werner said he has some clients who buy their Christmas presents and school clothes with nuts they would be picking up anyway.

For those with a lot of walnuts who want to speed up the harvest and make it easier, there are pull-behind machines that will pick walnuts off the ground.

Mike Cook just ordered one online for $66. With about 120 walnut trees on his acreage just north of Waterloo, the retired John Deere worker is going to give selling walnuts a try for the first time.

In the fall, Cook said, he's usually up to his ankles in walnuts.

"I thought of them as a waste product. I got on the Internet, did some surfing and found out I could market them," Cook said. "I think I got a lot of pickup loads."

If the money is good compared to the labor and expense, Cook said, he'll continue doing it. He plans on investing the profits.

For people with smaller amounts of walnuts that may not be worth selling, Vern Fish with the Black Hawk County Conservation Board urges people to donate them. The county is establishing a new 40-acre forest near the west fork of the Cedar River between Finchford and Janesville, and wants walnuts and acorns to seed it.

"We literally need tons of nuts ... anything that rolls," Fish said. "We're happy to get them out of yards and landfills and back into the woods."

CEDAR FALLS — A Cedar Falls man has been charged in connection with a FBI child pornography probe.

CEDAR RAPIDS — Three people have been charged with allegedly altering odometer readings on vehicles sold on the internet.

Activist Joyce Levingston told Board of Education that a group of families will withdraw their children from district schools if a list of five demands isn't met in next month.

CEDAR FALLS – It was only two weeks ago when Martha Wardell stood in the frigid cold watching her house ablaze. In her hands she clutched a fe…

A new indoor/outdoor restaurant in a former warehouse and green space downtown was preliminarily approved by the city's zoning board.

It's a game-changer at Western Home Communities. Monoclonal antibody therapy has been successfully administered to 21 residents who tested positive for COVID-19.

Eric Werner uses a shovel to move black walnuts into his walnut huller after a customer dropped them off Wednesday, Sept. 23, 2009, in Toledo, Iowa. (MATTHEW PUTNEY / Courier Photo Editor)