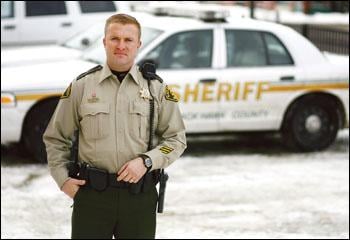 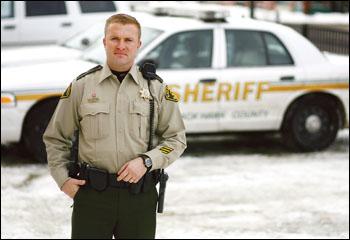 Since winning the November election, Thompson has seen little of his patrol duties and has been preparing to make the transition to the office's top slot and for the upcoming budget process.

He acknowledges some assistance he has gotten.

"Mike has been great helping me," Thompson said. "The two captains have been wonderful."

One of his campaign promises, putting more inmates to work, starts this month. He said passers-by will notice crews shoveling snow and chipping ice around the jail and courthouse. Future assignments include yard maintenance and cleanup of roadside ditches.

Thompson said the office will be able to staff the additional hours with the help of volunteers and unpaid college interns.

Inmates at the jail will notice some additional costs. Starting today, people coming to jail to serve time for convictions must pay a $25 booking fee.

Thompson said this will be particularly costly for people who opt to break up their sentences to serve on weekends. Each time they are booked in for a weekend stay will mean another $25 fee.

"Right now we incur the cost of them coming in every weekend," Thompson said.

Permits to purchase handguns and carry firearms also will go up from $5 to $10.

Along with preparing for his upcoming duties, Thompson already has made one promotion.

Rick Abben, formerly a patrol sergeant, became a captain and has been designated "first deputy." The designation, also known as chief deputy, hasn't been used since 2001 when the previous officer retired.

Abben's promotion brings to three the number of captains in the sheriff's office. The new slot will take the patrol unit from one of the existing captains and investigations unit from the other to create the field services division.

"I'm coming from the worker bee side of the house. We need a little more structure than we have now," Thompson said.

Capt. Mark Johnson will continue to head the jail division, and Capt. Reid Corson will oversee the special services division.

During the upcoming budget process, Thompson plans to seek an additional patrol deputy. He also wants to increase the contract for jail medical coverage to have a health professional at the facility around the clock.

One person is dead following an apparent drowning at George Wyth State Park on Sunday evening.

A Waterloo care worker has been arrested for allegedly abusing an autistic man under her care.

A Waterloo man has been arrested after allegedly leading authorities on a high-speed chase and while tossing drugs from his vehicle.

He claimed his prize Tuesday at the Iowa Lottery headquarters in Clive.

The company is looking to hire more employees. “In our business, you want bright people, but you don’t have to have college degrees,” said Stratacache CEO Chris Riegel.

“Typical birthday party attendees do not expect the hired clown or magician to start electrocuting and incapacitating people," the judge said.