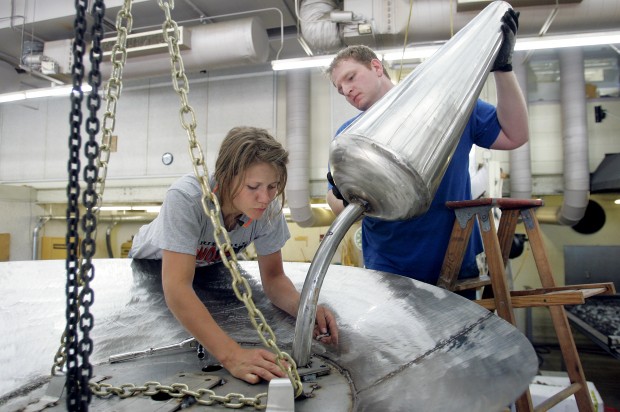 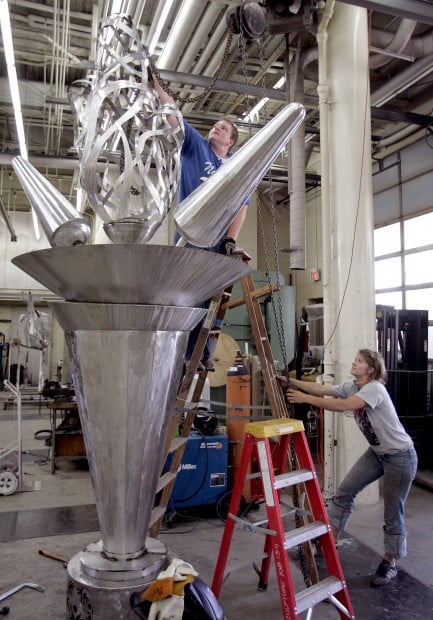 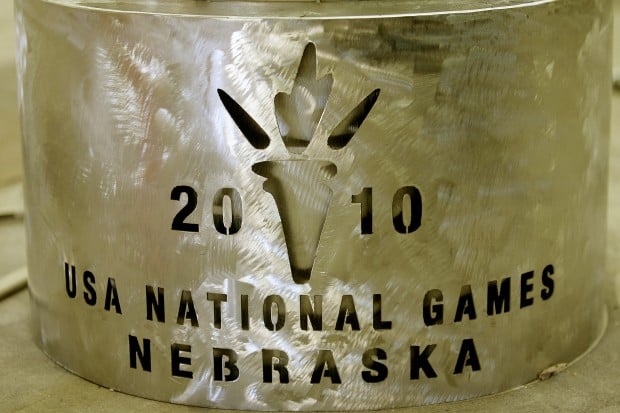 CEDAR FALLS --- It may be summer on the University of Northern Iowa campus, but sparks are still flying inside the Kamerick Art Building sculpture lab.

Dan Perry, the shop technician for the university's art department, and Beth Nybeck, a recent UNI graduate, have just a week and a half to finish a 12-foot tall cauldron that will be the centerpiece for the 2010 Special Olympics USA National Games in Lincoln, Neb., July 18-23. Tom Stancliffe, an UNI art professor, is serving as the senior adviser on the project.

One of Perry's former professors contacted him about the open call for cauldron proposals in February, but it wasn't until mid-May that Perry and Nybeck were told to start work.

"We were really crunched for time," he said.

But they were ready for the challenge of building a 3-D version of the national games logo. It is being constructed out of stainless steel sheet metal and spun stainless steel elements. Perry's traditional medium of choice is wood. Nybeck, who specializes in metal pieces of public art, had never created anything as big as the proposed cauldron.

Perry estimated they will have at least 80 hours of work in the sculpture and another 40 in the transporting and installation.

On July 13 the two will travel to Lincoln where the piece will be installed. A pyrotechnics expert will run a gas line through the center of the cauldron to light the traditional flame. They will also attend the opening ceremony and a few events while in Lincoln.

Nybeck, who is currently working with the Arts Incubator Project in Kansas City, Mo., is particularly excited to be in Lincoln for the opening ceremonies.

"It's like we are a small piece of a really big puzzle," she said.

Perry said he is focusing on the construction for now. He doesn't want the added pressure of thinking about just how important this installation will be.

"These are national games. It's a pretty big thing," he said. "I just don't want it to fall over."

John Deere is hiring in Waterloo. Big time. Like, to the tune of 300 jobs.

The Cedar Falls Hy-Vee store at College Square is among a number of Iowa establishments cited by health inspectors for unsafe food practices.

A fight at a Waterloo trampoline business drew numerous officers and promoted neighboring businesses to shut down Friday night.

Restaurant owner Jeani Johnson, 38, lost her dad and was pregnant with twins when her business had to shut down during COVID-19.

Two people were injured in a Saturday night crash that demolished a garage.

One person injured in morning shooting in Waterloo

One person was taken to the hospital following Sunday morning shooting in Waterloo.

After 'unprecedented' cold, 'sky-high' prices, CFU to raise gas bills around $45/month for next year