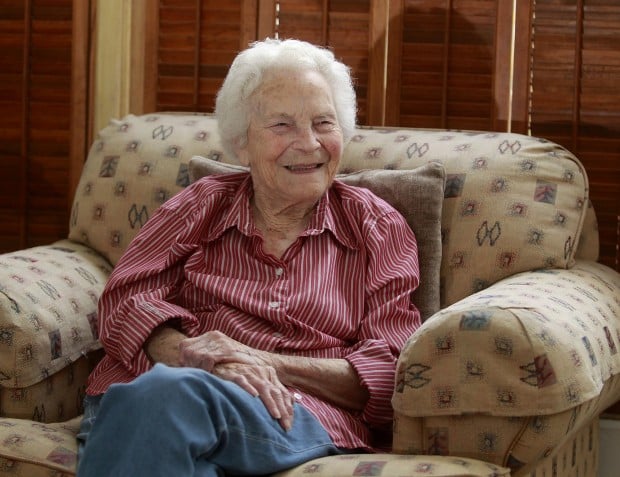 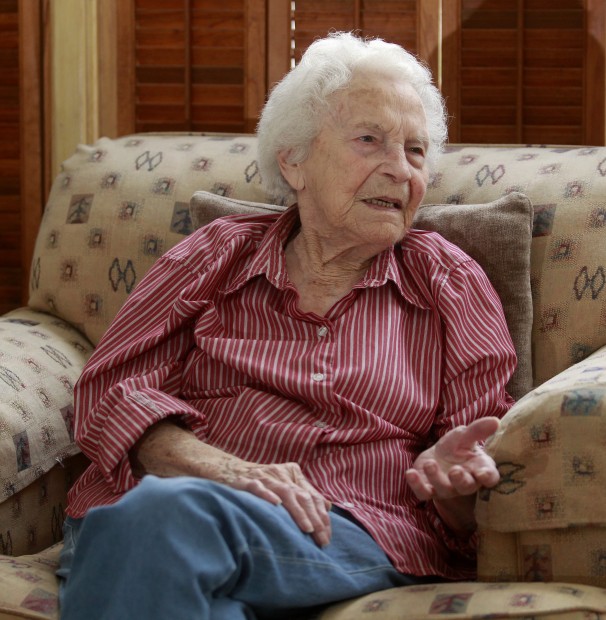 WATERLOO --- Katherine McFarland's home is modest, and neat as a pin.

No mess. No clutter. No signs of dwelling on the past.

It would not be unusual for a 90-year-old woman to have shelves full of old photos, daily reminders of days gone by.

That's not the case with Katherine McFarland. She has memories, to be sure --- good ones --- and she has known tragedy and loss. But she's never been bound by self-pity and second guessing.

Her late first husband and his brothers would have wanted it that way.

Keep your chins up, they would say.

McFarland is the widow of Albert Sullivan, youngest of the five Sullivan brothers killed 70 years ago this month during World War II.

She has not brooded on the loss or simply marked time since. For years she has remained in the background during various events honoring the five brothers, because she had a full life after their passing. She raised her and Albert's son, Jim, now retired and living in Waterloo. And she enjoyed a nearly 40-year marriage to Dean McFarland, a World War II veteran and United Auto Workers Local 838 president, who died in 1986.

But, with granddaughter Kelly Sullivan Loughren by her side, she recently shared her recollections of the five brothers with the Courier.

It was not a sad reflection.

McFarland told a story of a household and family full of joy, laughter, more than a little raucousness, and love.

And, in the case of Albert Sullivan, she told a story of a big case of premarital jitters on May, 11, 1940, when he married McFarland, then Katherine Rooff, known as "Keena" to family. Sullivan passed out cold at the altar at their wedding Mass, at Sacred Heart Catholic Church.

"No kidding. Balk! Down he went. He was so nervous," Katherine said with a laugh.

Albert was standing next to his best man, Leo Rooff, Katherine's cousin, who 30 years later would become mayor of Waterloo. Albert's sister, Genevieve Sullivan, was maid of honor.

"We just looked at him, What could we do?" she said. But Albert came to and the ceremony went on without incident from that point.

Albert, or Al as he was known to friends, and Katherine had wed after about a year's courtship. They had met during outings at a park in the Riverview area off what is now La Porte Road and East Mitchell Avenue.

"It really was nice at that time. It was nice and clean years ago. That was really a nice place to live." The sand pits there, now part of the Riverview Recreation area, were a popular area for recreation and swimming. She went for bike rides there.

"I don't know, we just got acquainted," she said, adding modestly. "You know how things go." She paused a moment before breaking out laughing.

They both worked at The Rath Packing Co. in different areas of what was then Waterloo's largest employer. "I worked in the lard room," she said. "That was a mess." Albert also worked for a time in the Civilian Conservation Corps, a New Deal-era jobs program, doing construction work at Backbone State Park.

"They were a real close family," Katherine said of the household of Thomas and Alleta Sullivan, the boys' parents. "Every Sunday around Sunday dinner, everyone was there, just a lot of fun. They were really a happy-go-lucky family."

A neighborhood bar was a favorite before-dinner destination for the grown brothers. Their grandmother, Mae Abel, assumed many household duties and kept things in line, but would provoke Thomas into an argument over religion or politics at the dinner table, just for sport.

However, one Sunday dinner in late 1941 was different. "We had the radio on Dec. 7," Katherine recalled, and the family heard of the Japanese attack on Pearl Harbor. Some mention was made of Bill Ball, a friend of the brothers from Fredericksburg, who was on the battleship USS Arizona. It was later learned he died in the attack.

"My goodness sakes, that was something. It wasn't too long after that that they enlisted in the Navy," Katherine said.

Katherine and Albert hadn't yet been married two years when Albert and his brothers enlisted, and they now had their son. Albert, with a young family and older brothers enlisting, had the option of not going. Katherine encouraged him to go.

"They really wanted to go, those boys. They wanted to be together. He wouldn't have been happy at all with his brothers gone in the service. You don't think anything is going to happen to them," Katherine said. "That's the sad part of it. Being young you don't know what it means to be in war. You think, 'Oh they're going to be back.' And all of a sudden, they're not back."

Katherine recalled the day a military officer notified the family the brothers were missing.

"They came to the house," she said. That was January 1943. "It wasn't too long after we got the news that they were gone, dead."

The brothers and all but 14 of their shipmates on the cruiser USS Juneau died after the ship was struck by a Japanese torpedo and sunk on Nov. 13, 1942, while returning with other battle-damaged U.S. ships from the naval Battle of Guadalcanal.

"Everything seemed so different, like it didn't really happen, you know what I mean?" Katherine said. "I don't know how come it felt that way. And of course you didn't see them. You never saw a body, somebody in a casket," affording closure. "It just seemed not right. You can't believe it."

Katherine and young Jim stayed with the Sullivan family for a time after he was killed. It was not unusual at that time for extended family, in the Depression and war years, to live together. "You just had to; there wasn't any other way."

The Sullivan family was caught in a wave of publicity. A Navy ship was named for the brothers, and the family participated in war bond drives. Katherine shied away from that attention to raise her son. "I had Jim. He was just a little kid, wasn't even in school," she said.

Thomas Sullivan "never got over," the loss of his sons, Katherine said, but remained a good grandfather to Jim.

She and Dean McFarland, who served with the Marines in the Pacific during the war, were married Dec. 31, 1946. McFarland remained a friend to the Sullivan family, sharing outings to Harpers Ferry and Thomas Sullivan would frequently offer help with raising Jim. There were no other children.

She still enjoys the company of Jim, her grandchildren and family. She is appreciative, but totally unpretentious, about her life with the Sullivans.

Of the 1940s-era Hollywood movie "The Fighting Sullivans" Katherine said. "I thought it was a lot of BS. Everyday life, it's boring. They had to spice it up a little bit. Really kind of funny, in a way."

And her own portrayal in the movie "made me mad," she said because of one inaccuracy.

The actress who played her wasn't attractive enough.

A motorcyclist was taken to the hospital following an early Monday morning crash in Waterloo.

A Waterloo woman has been arrested for allegedly shooting into a car carrying children and others in April.

A passerby called 911 shortly after 3 a.m. after spotting him in the river near the Park Avenue bridge.