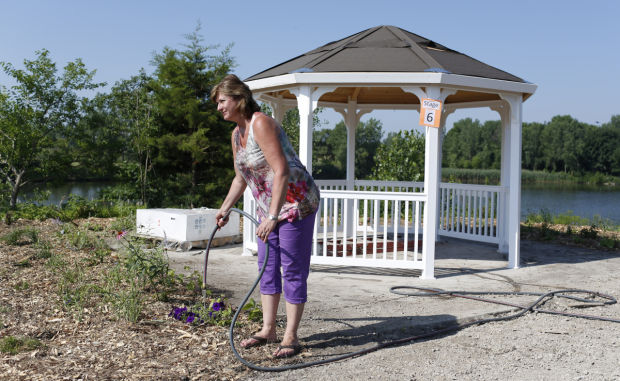 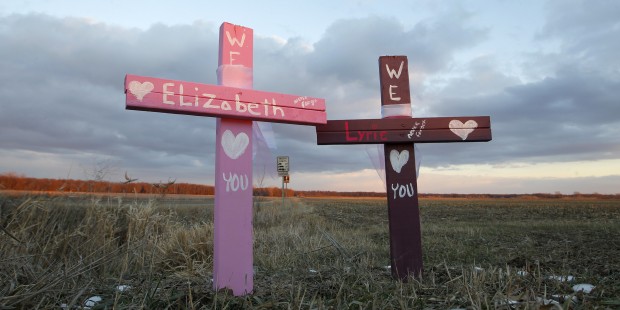 Crosses in memory of Elizabeth Collins, 9, and Lyric Cook-Morrissey, 11, stand near the road leading into Seven Bridges Wildlife Area where the bodies of the Evansdale cousins were found by hunters. Photographed Tuesday, December 11, 2012. (BRANDON POLLOCK / Courier Staff Photographer) 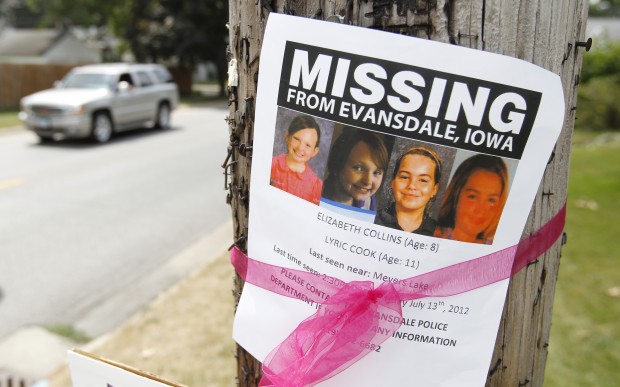 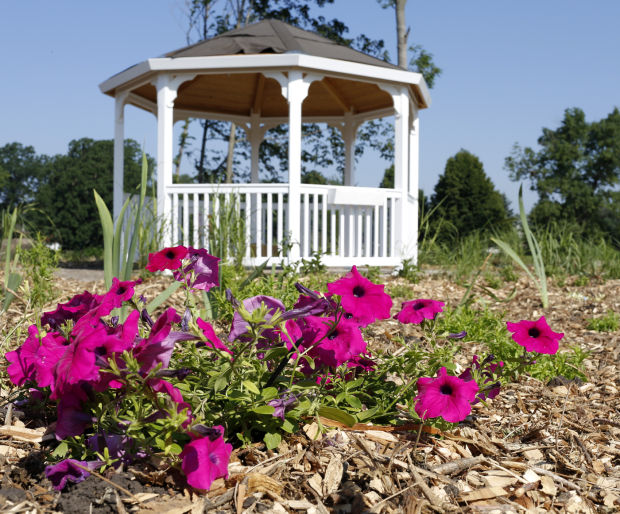 Plants and flowers have been planted around a gazebo at Angels Park Thursday, July 11, 2013 in Evansdale, Iowa. (MATTHEW PUTNEY / Courier Photo Editor)

EVANSDALE, Iowa --- A year later, Heather Collins still has trouble looking toward the far corner of what used to be called Meyers Lake Park.

“I don’t ever really look in the back corner. I just don’t,” Heather Collins said.

She and her husband, Drew, had strolled the path around to the back of the lake in the past. But they haven’t since their daughter, Elizabeth, and niece, Lyric Cook Morrissey, disappeared July 13, 2012, leaving behind their bikes and a purse in the wooded corner where the trail leaves the park.

“Just like I’ll never go to Seven Bridges, I guess I don’t see a reason to,” Heather Collins said, referring to the rural Bremer County wildlife area where the girls were found dead in December.

Saturday marks one year since cousins Elizabeth, 8, and Lyric, 10, disappeared while riding their bikes in Evansdale. Authorities call it an abduction, but no arrests have been made in the case, and officials have been tight lipped about any developments.

“There are pieces of evidence that we have that only the person or persons responsible know,” said Evansdale Police Chief Kent Smock. “I know the public is just starved for information. They want closure, they want information, but at the cost of destroying our case? We just can’t.”

Drew Collins said it’s difficult to be in the dark about the investigation, but he understands the reasons.

“It’s hard, but when they take this to court, I want it to be locked solid,” he said. “But, in the same respect, it’s hard because you don’t know.”

Instead, the couple has focused its energy on raising awareness, preparing a memorial to the girls and caring for their three other children.

Over the past year, the Collins have taken the role of activist, crusading for quicker community notification when children disappear.

They have also voiced concerns over sex offenders who have shirked their registration requirements. They are slated to be speakers at an August conference on abducted children and human trafficking.

“I like to help out with the Crime Stoppers, with missing sex offenders, with the park and still try to have a happy home life at the same time. It’s a balancing act. For me, it makes me feel like I’m doing something for Elizabeth and Lyric,” said Drew Collins, who also runs a tree-trimming business.

The small island on Meyers Lake — since renamed Angels Park — is now a hub of activity as workers put the finishing touches on a shelter and gazebos built as a memorial to slain children. In addition to Lyric and Elizabeth, the project will honor Evelyn Miller, Donnisha Hill and Lindsay Nichols.

“If we didn’t have this park, and we didn’t do the Concert for the Angels and the other things that we’ve been doing, what would we be doing? We’d be at home, and when you are sitting idle, aren’t keeping yourself busy, that’s when the monsters come. You have too much time to think,” Drew Collins said.

Heather Collins said she was overwhelmed by the community support that has come out since the disappearance.

Hundreds of volunteers turned out to search the area during the first few days They returned to blanket the community and surrounding towns with flyers and are now volunteering with the park project.

“We’ve had so much support, and it hasn’t gone. People are just amazing. You have something so tragic happen, and then you have all these kind people, you have all this good. It’s just hard to put you head around it,” Heather Collins said.

The couple also remains focused on keeping their family together. When they recently attended an Amber Alert conference with other parents who lost children, the toll such tragedies takes on marriages was evident.

Of the 60 people there, only the Collins and another couple were still together, Heather Collins said.

“The divorce rate is 98 percent, they say,” she said. She said her marriage is still strong and hasn’t been hindered by the case.

“We also respect each others way of how we grieve,” she said. “I understand he grieves differently, and I’m OK with that.”

Meanwhile, legislation spurred by the cousins abduction is pending with Iowa law makers.

It would also create a fund to buy equipment to allow emergency dispatch centers to disseminate information to the public instead of simply fielding incoming phone calls.

Black Hawk County has had a similar system in place for years. During the cousins disappearance it sent out an alert to all land-line phones in a half-mile radius of Meyers Lake. The act would bring that technology to other counties.

“It’s very important that in the first few moments, the largest possible number of people need to know about that, and there’s a lot of good tools out there now,” Danielson said.

A third section of the Missing Iowa Children’s Act would require the state to rank sex offenders according to risk factors. Danielson said this would help investigators prioritize area sex offenders for possible interviews when there is a disappearance.

The bill passed out of the state government committee last session.

As for the far corner of the park where the girls’ bikes were found, where investigators believed they encountered their kidnapper, city officials cut down a small copse of trees to make the trail visible to passing traffic on Interstate 380.

“It dresses it up a little better, but it’s also for safety. That was so overgrown and became kind of a secluded little tunnel. It opens it up now so people can see, and it’s not quite as isolated,” Smock said.

EVANSDALE, Iowa --- People will gather to remember Lyric Cook-Morrissey and Elizabeth Collins during a "Memorial Ride and Drive for the Girls"…

EVANSDALE, Iowa — Clouds hung over Lofty’s Lounge Saturday morning and the roar of motorcycles thundered during a memorial ride and drive for …

WATERLOO, Iowa --- Roller derby isn't all about torn fishnets and throwing elbows anymore. Of course, the ladies of the Cedar Valley Derby Divas team do love rough-and-tumble rolling, but their softer side is always looking for a cause.

EVANSDALE, Iowa (AP) --- Nearly a year after two Iowa cousins were abducted and killed, family members and police remain frustrated by the inv…

Crosses in memory of Elizabeth Collins, 9, and Lyric Cook-Morrissey, 11, stand near the road leading into Seven Bridges Wildlife Area where the bodies of the Evansdale cousins were found by hunters. Photographed Tuesday, December 11, 2012. (BRANDON POLLOCK / Courier Staff Photographer)

Plants and flowers have been planted around a gazebo at Angels Park Thursday, July 11, 2013 in Evansdale, Iowa. (MATTHEW PUTNEY / Courier Photo Editor)