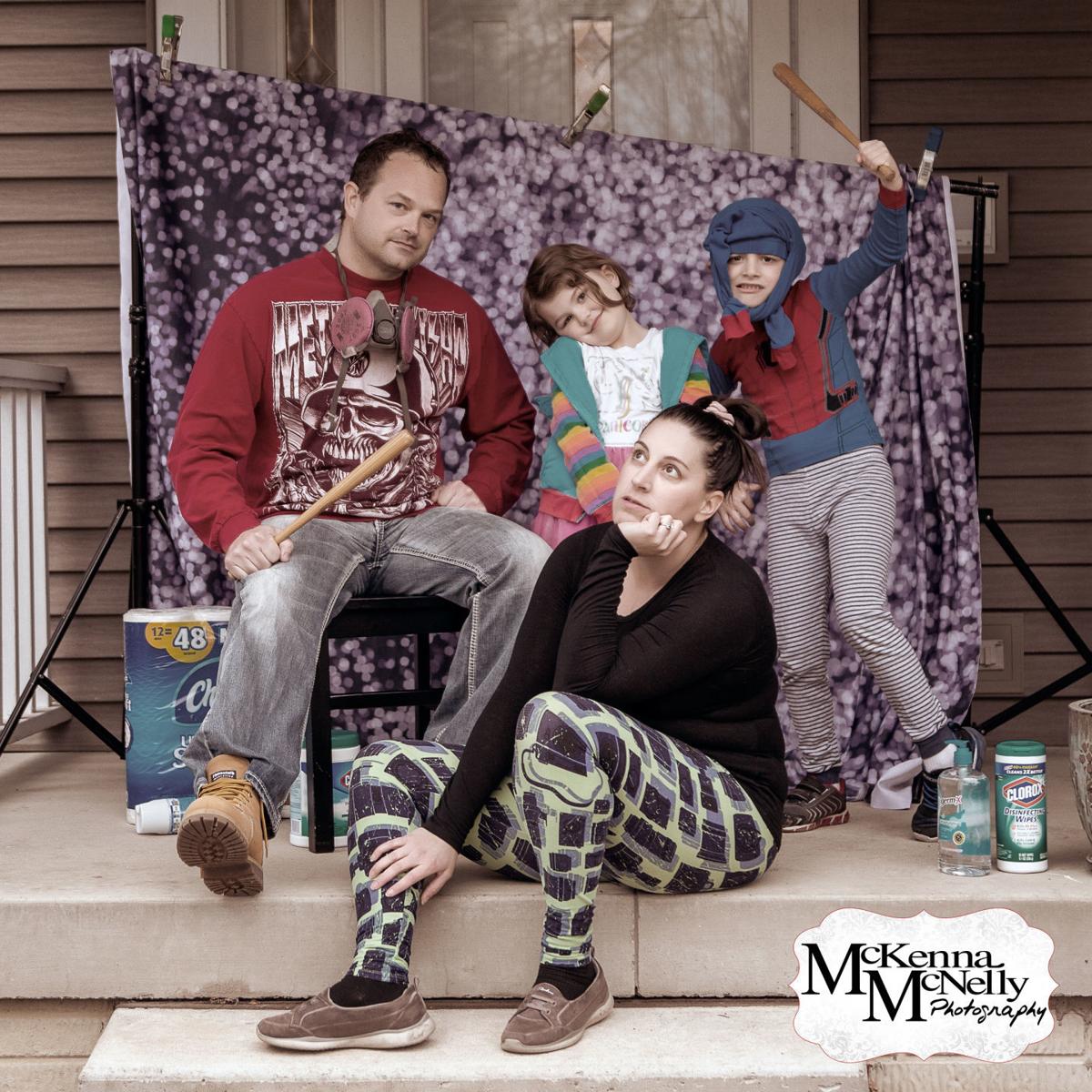 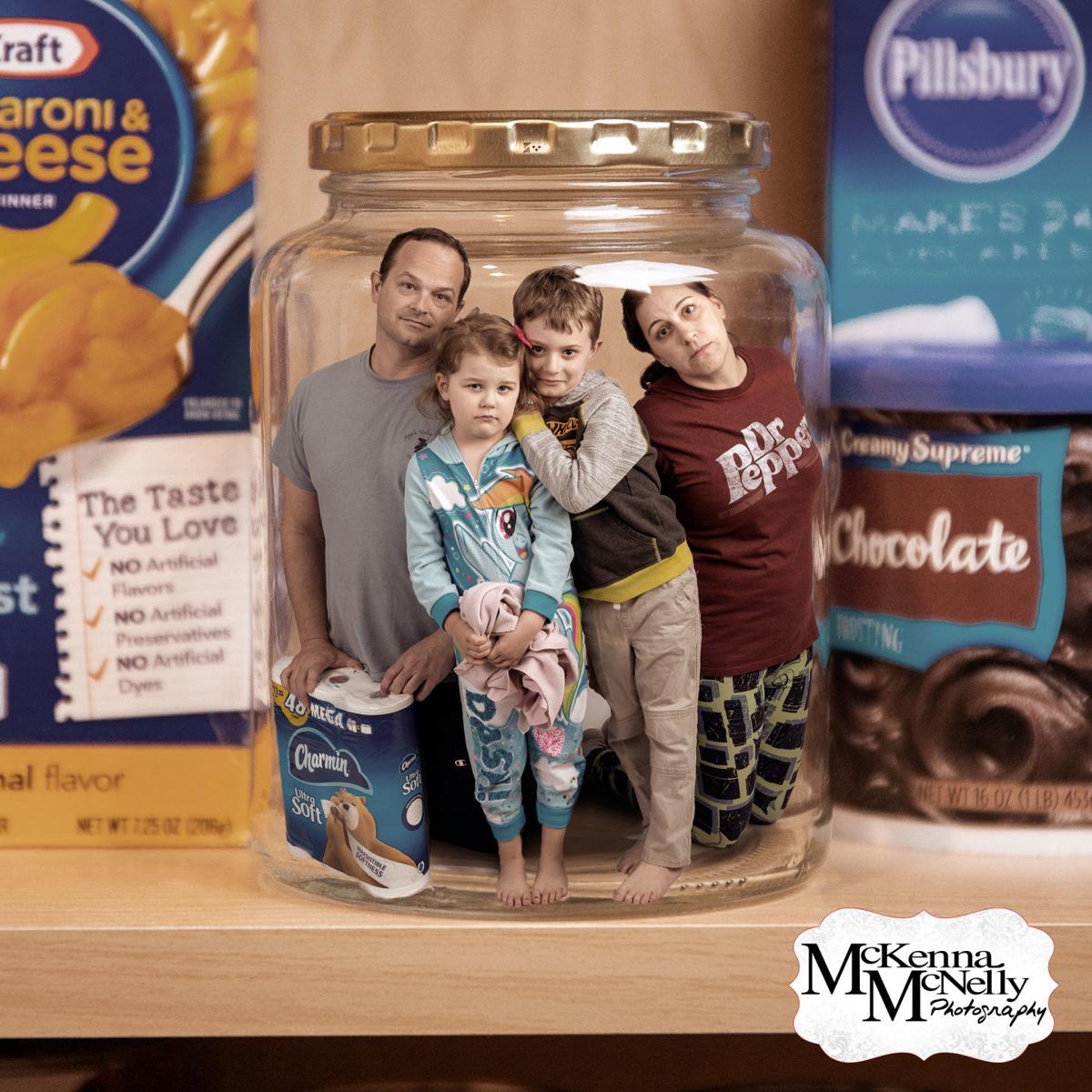 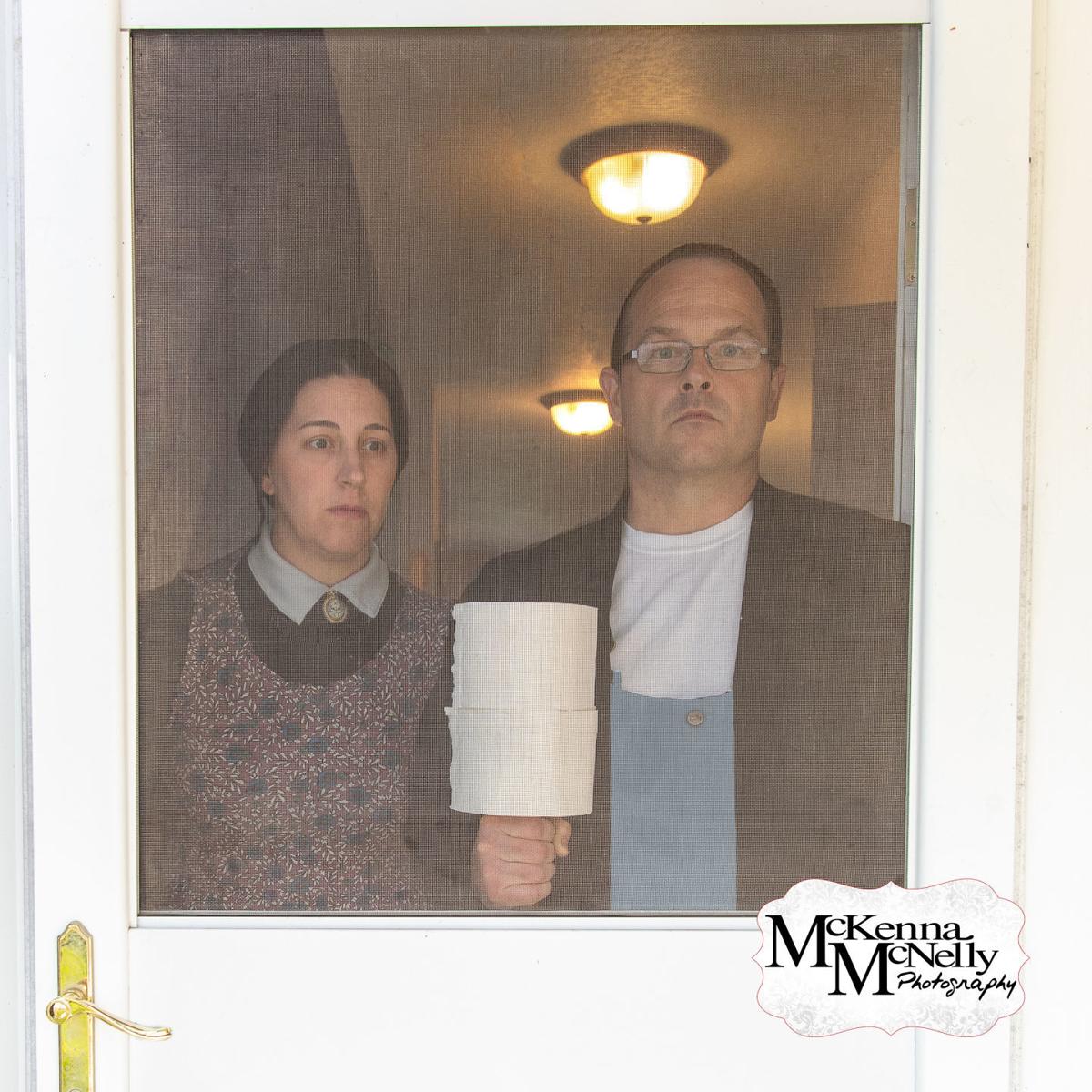 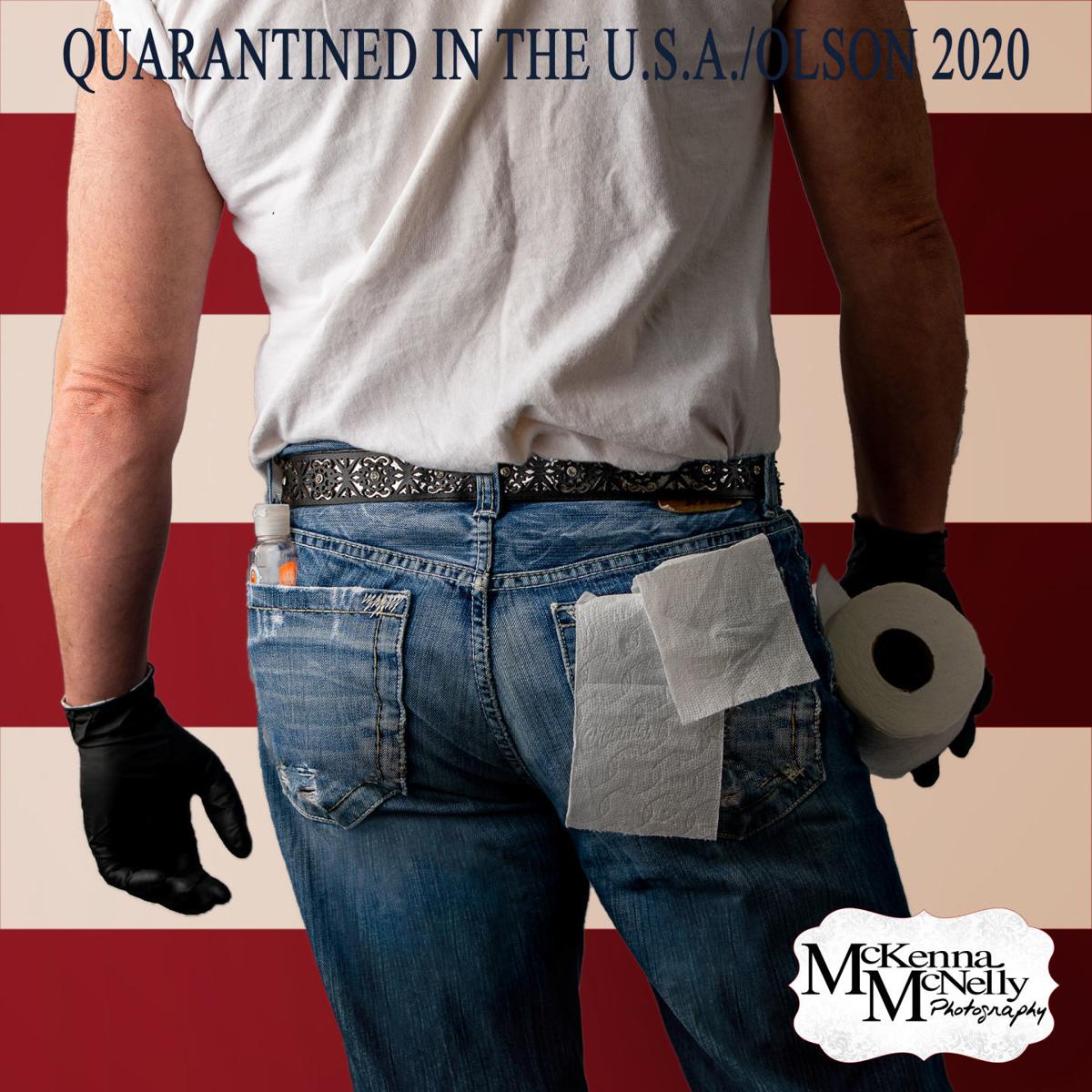 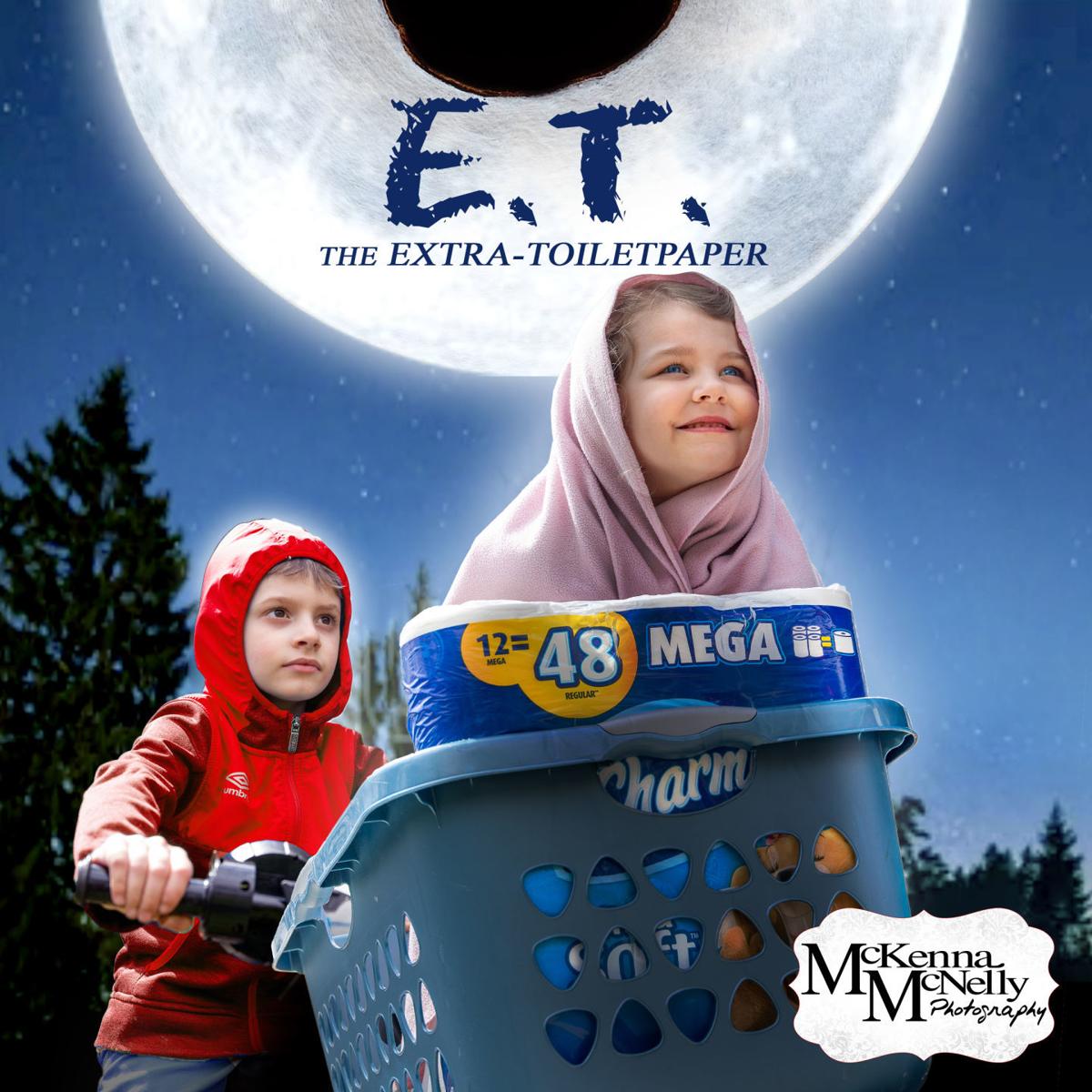 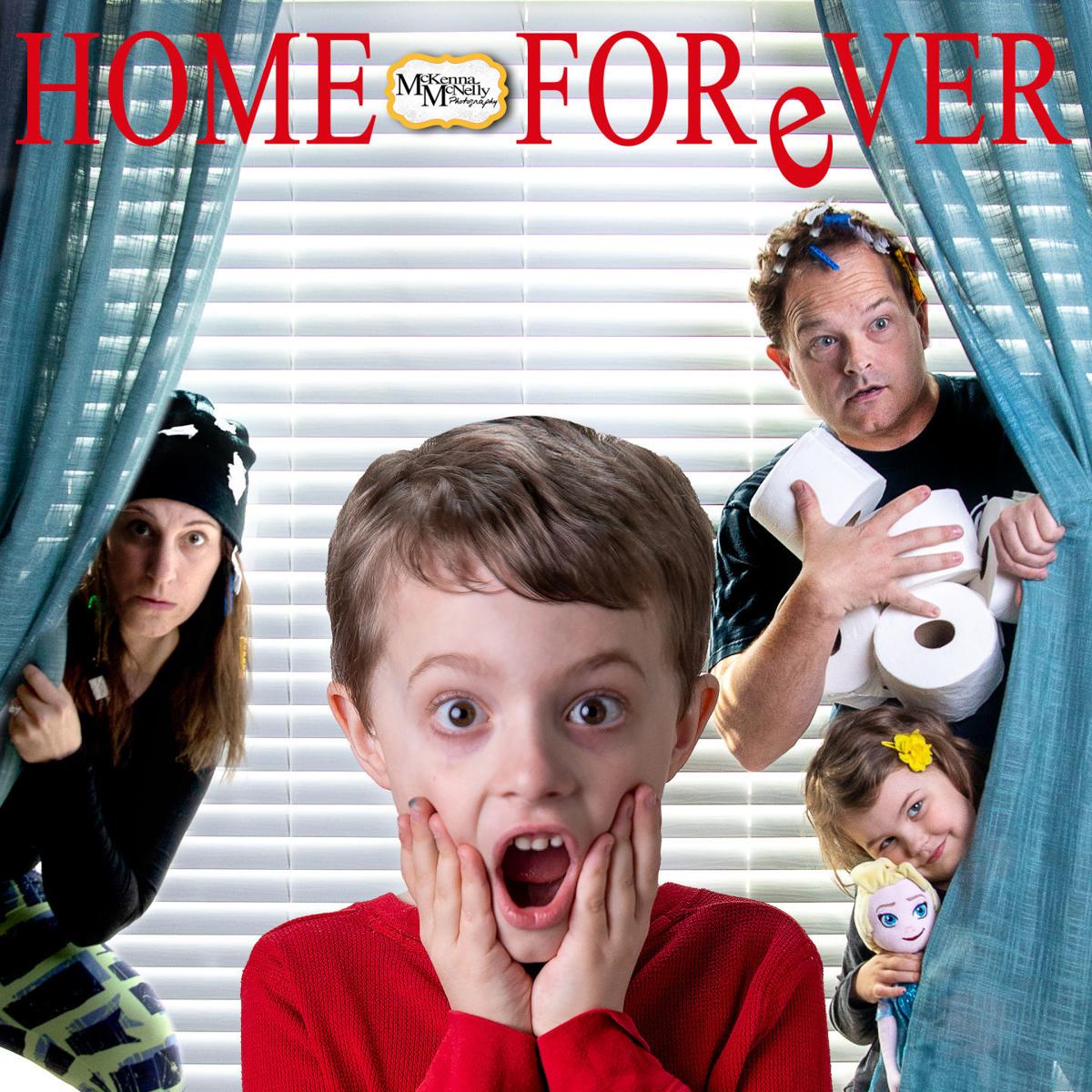 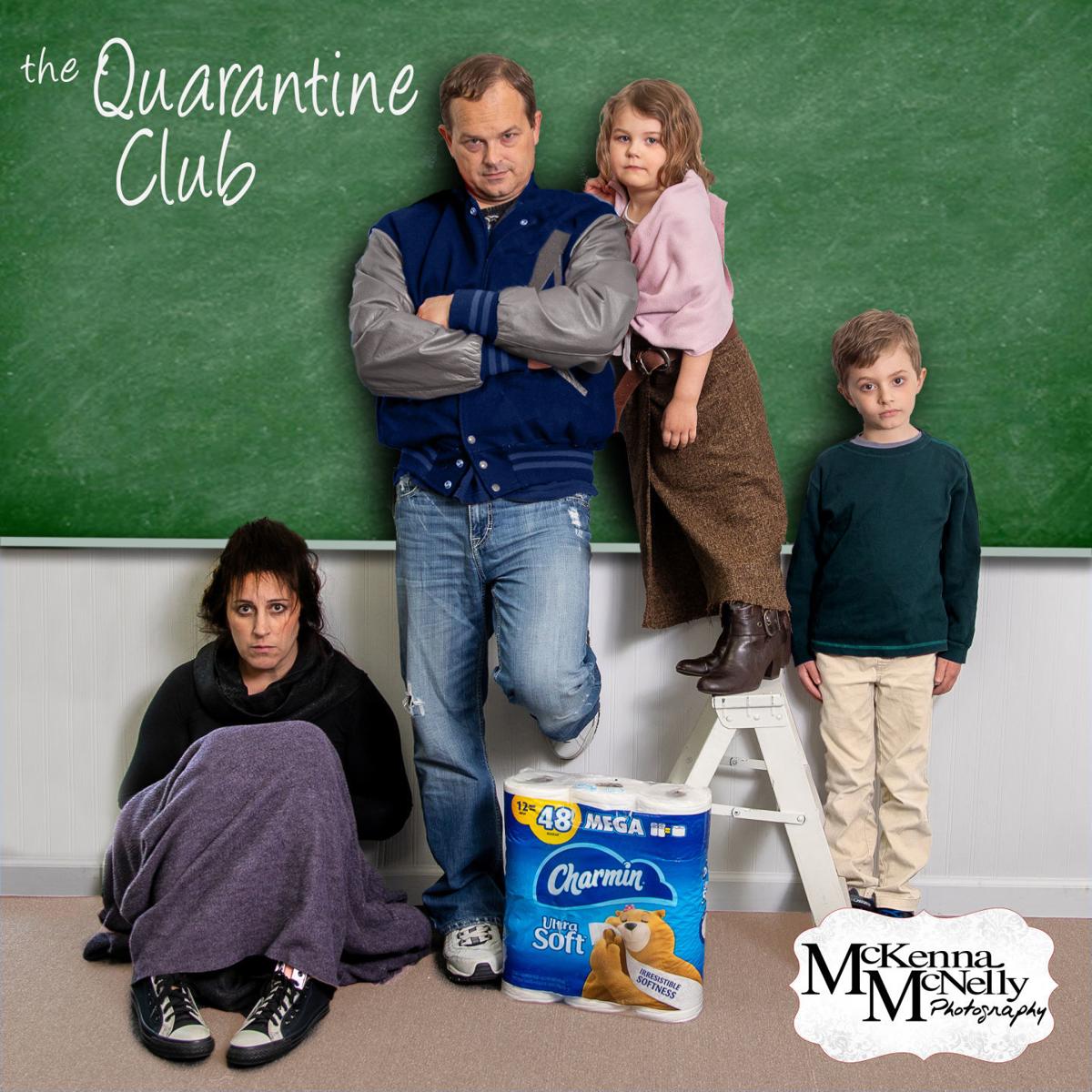 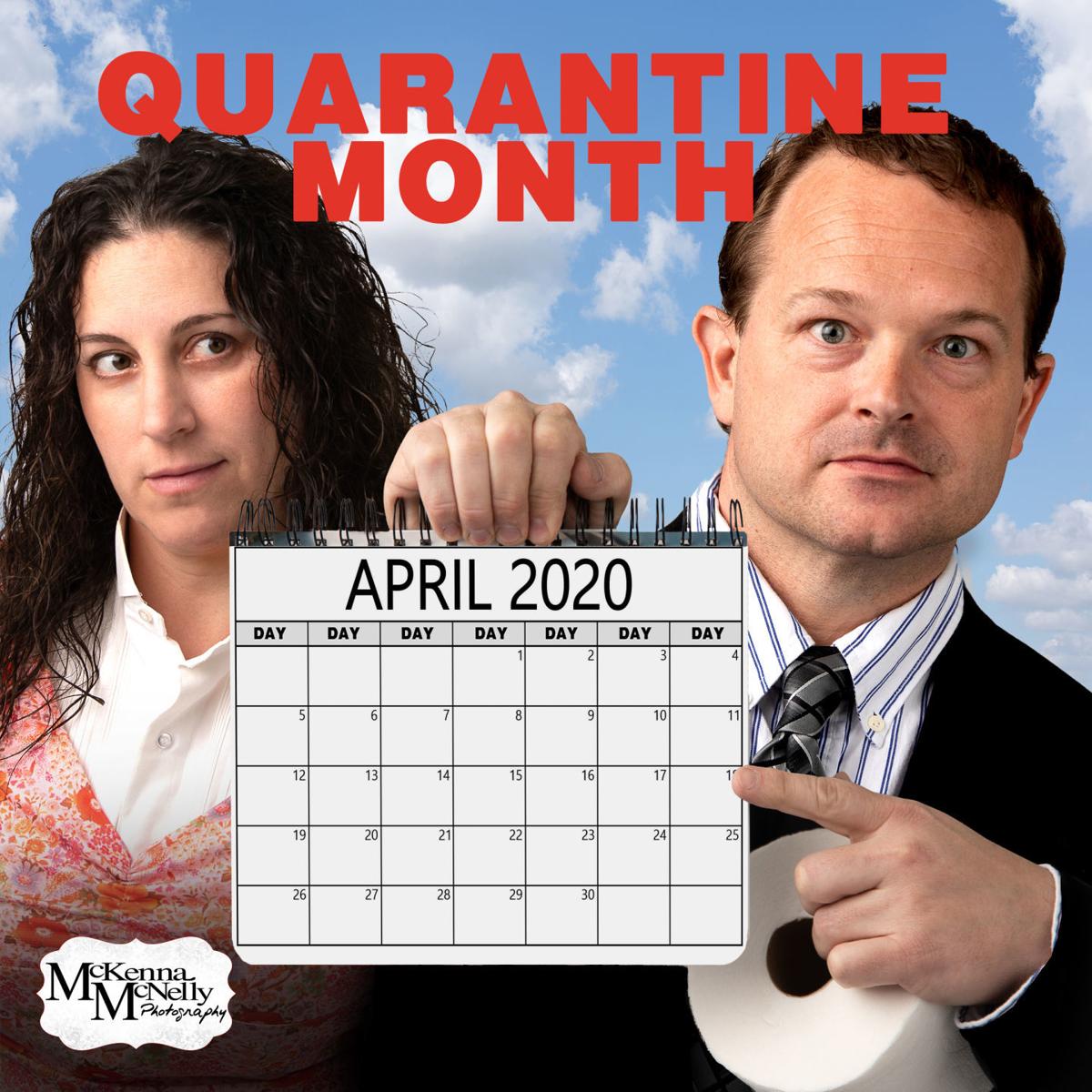 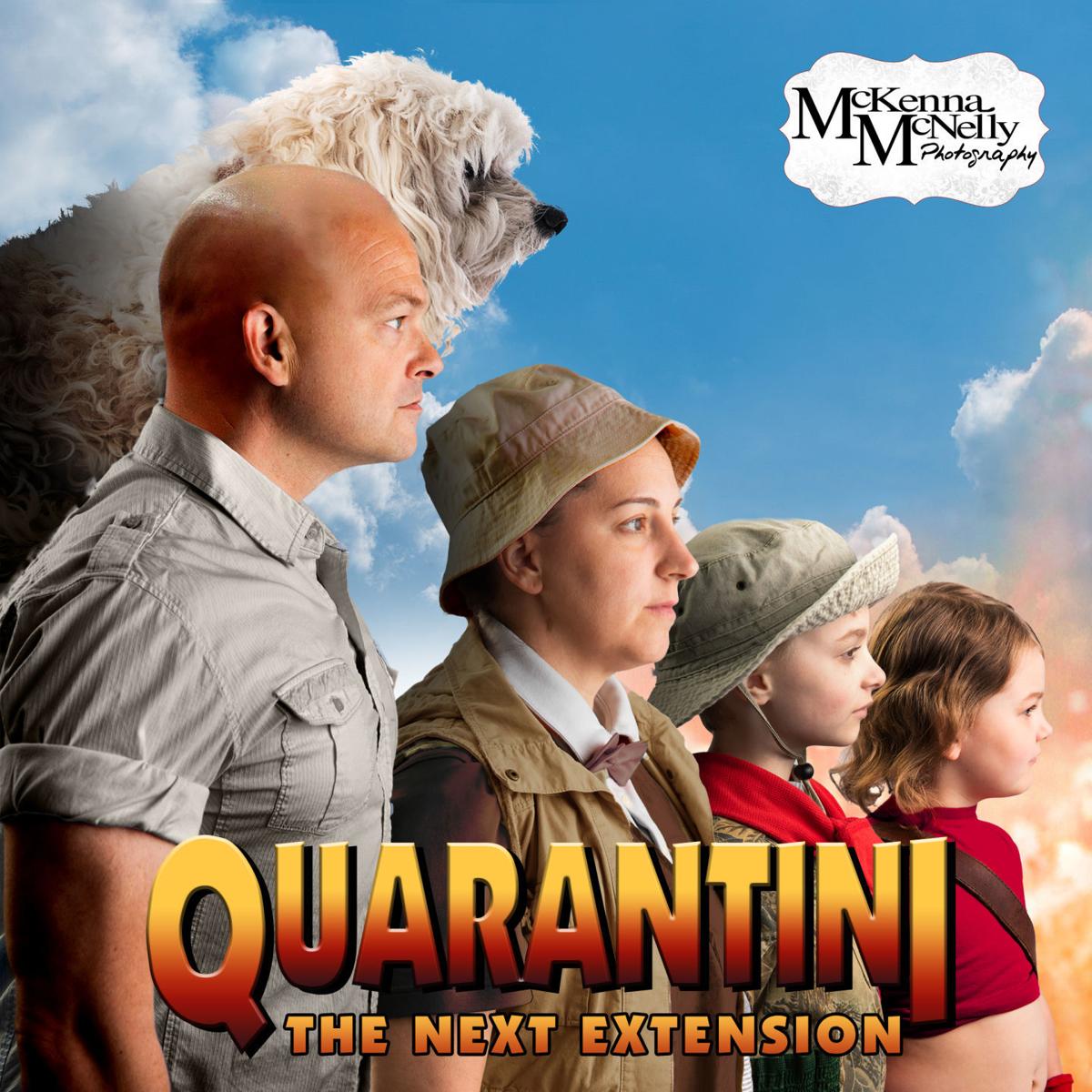 WATERLOO – Stuck at home during the COVID-19 pandemic, professional photographers Crystal and Aaron Olson decided to chronicle their captivity.

Since April Fool’s Day, the Olsons have designed and staged an original scene or recreated a famous pop culture image to photograph and post daily on their Facebook page.

The funny, inventive postings have been a hit with their Facebook fans and is generating a growing following for the owners of McKenna McNelly Photography in Waterloo.

“We had to shut down our business and shelter at home. We tried to think of ways to create a little buzz, so we started on April 1 documenting our family quarantine. We had so much fun that first day, we just kept going. It’s been fun and crazy and lifted our spirits,” said Crystal.

Day One’s photo session took place on their front porch with a pensive-looking Crystal wearing “my crazy camera pants that Aaron doesn’t want anyone to see me wearing in front of our house,” surrounded by her family. “We were kind of mocking what was going on,” with hand sanitizer, disinfectant wipes and toilet paper noticeable in the photo.

Another early Quarantine Project photo shows the entire family trapped inside a pickle jar with a package of toilet paper, stored on a shelf of their pantry next to a box of macaroni and cheese and a cake mix.

“I felt like we were staring in the pantry a lot, looking for food,” said Aaron, laughing. “And every day, we’ve felt a little trapped,” Crystal interjected.

“We collaborate and brainstorm ideas of what we’re going to photograph each day, and it’s evolved into capturing pop culture images and just being our goofy selves. Because we’re not working right now, the creative aspect of what we’re doing keeps our minds fresh. The kids are having a blast,” she explained.

“And we bribe them with snacks,” Aaron noted.

So far, the Olson family has recreated such iconic images as Grant Wood’s “American Gothic” and Bruce Springsteen’s “Born in the U.S.A.” album cover, as well as hilarious spoofs of movie posters, including “ET: The Extra-Terrestrial,” “Breakfast Club,” “Honey, I Shrunk the Kids,” “Ace Ventura: Pet Detective,” “Jumanji,” “Home Alone,” “Freaky Friday” and others.

They’ve entertained the occasional request from Facebook friends, Aaron said, “and we’ve had people even drive up to the end of our driveway and yell at us to ‘keep it up, we want to see more!’”

Crystal sets up the camera using a tripod and timer and arranges lighting for each scene, while Aaron edits the images, including using Photo Shop.

“We work together to make what we do happen. It’s all collaboration,” Aaron said, and the ideas aren’t always easy to cook up. “We have the kids, and we’re busy doing things, so sometimes we’ll have an idea and get it posted before lunch. Sometimes it isn’t until 8 o’clock at night.”

The Olsons are thrilled that people look forward to their daily posts and respond with comments and messages.

“I love that we’re putting smiles on faces. That makes me feel good, that we’re helping people laugh during the quarantine and contributing to someone’s enjoyment of the day,” Crystal added.

Find “Our Quarantine Project 2020” at https://www.facebook.com/pg/MckennaMcnellyPhotography.

Donna Harman, who died Friday at the age of 94, was an advocate for early childhood education and a supporter of multiple causes at her alma mater, the University of Northern Iowa.

Distribution being done on appointment basis.

Iowa had about 1200 opera houses from 1870 to 1920. Now about 300 are standing. Historians/authors of "Opera Houses of Iowa" have  updated and reissued their book with fresh details.

The one thing you can do for optimal brain health

The one thing you can do for optimal brain health

Do TikTok and WeChat pose real threats to national security?

Do TikTok and WeChat pose real threats to national security?