Homes in major metropolitan areas were difficult to find and largely priced out of reach for first-time buyers in the first quarter of 2020.

In 20 of the 50 largest U.S. metros, list prices were more than five times the median first-time home buyer income in January through March. Moreover, the number of active listings dropped by 19% compared with the first quarter of 2019, placing significant obstacles in the way of new buyers as the 2020 season began.

First-time home buyers face unique challenges. They’re generally younger than repeat buyers, so they have lower incomes and potentially less robust credit history, and they may not qualify for the best mortgage rates. When these factors are compounded by high sticker prices, low supply — and then the economic impact of a global pandemic — these buyers stand to be pushed out of the market altogether.

Home affordability can be measured by comparing incomes with home prices: The higher this ratio, the less affordable homes are. In this quarterly report, we compare the median incomes of Americans ages 25-44 — median first-time homebuying age is 33 — with a quarterly average of median home list prices in the most populous metropolitan areas. The analysis helps quantify just how realistic the dream of homeownership is for first-time buyers.

In this inaugural edition, we cover a period that began with a strong market and ended with widespread uncertainty. As the first quarter came to a close, what seemed to start off as a hot homebuying market was halted in its tracks by a pandemic with economic effects yet to be fully realized.

To be clear, this first-quarter data doesn’t describe explicit effects of the pandemic, as any changes in late March weren’t enough to impact monthly or quarterly figures. But it does provide a starting point from which to analyze the potential effects of the coronavirus in future quarterly reports.

Nationwide, the affordability ratio was 4.5 in the first quarter of 2020; that is, first-time home buyers could expect to see homes listed at about 4.5 times their income, on average.

We acknowledge first-time buyers may be in the market for homes priced lower than the median — starter homes, so to speak — but looking at a three-month average of median prices provides a good perspective of what new buyers see when they look at local listings.

Everything is more expensive in highly populated areas, and that includes homes. But if incomes aren’t proportional to home prices, then homeownership in these areas becomes more difficult for lower and middle earners. For example, though the San Francisco metro area has one of the highest average list prices for the quarter ($938,347), it also has one of the highest median incomes for first-time home buyers ($131,460). This makes it potentially more affordable than the San Diego metro area, where despite having an average list price roughly 21% less, its first-time home buyers are earning 37% less.

One rule of thumb when it comes to homebuying affordability is to look at homes priced at about three times your annual income. A lack of affordable homes for sale likely pushes folks, and especially first-time buyers with lower incomes, to stretch this recommended guideline.

Only one metro area in our analysis — Pittsburgh — had a quarterly average list price at or below three times the income of first-time home buyers. Three others were close: Quarterly list prices in Buffalo, Cleveland and St. Louis were 3.1 times median income. Twenty-eight had affordability ratios above the national average (4.5), and 10 had list prices over six times the local income for potential first-time buyers.

First-time buyer guidance: Depending on how strong the urge to own is, it can be tempting to increase your budget, but don’t take this step lightly. Use a home affordability calculator to help determine a realistic price range. And in these uncertain times, it’s prudent to consider the stability of your income before stretching yourself thin.

In just a handful of large metros, houses got more affordable when compared with the first quarter of 2019. List prices in Houston, Minneapolis, and Louisville, Kentucky, dropped the most, 4% after adjusting for inflation. But at the other end of the spectrum, prices rose 10% or more in six areas, with Los Angeles seeing the most dramatic increase, at 21%. 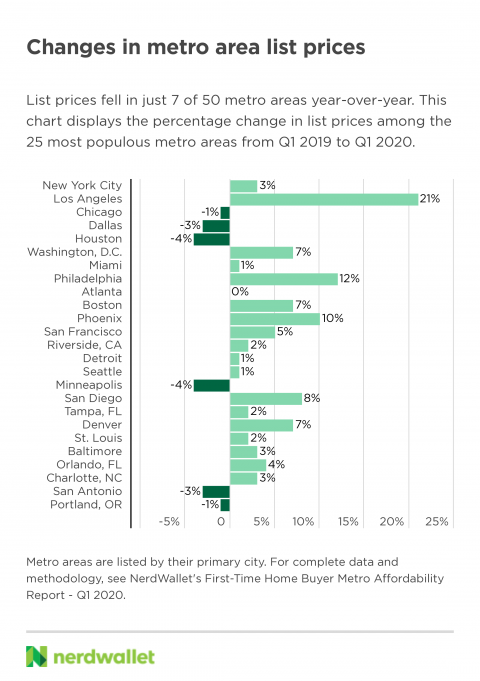 First-time buyer guidance: It’s unclear how housing prices will respond to the current economic turbulence. If you’re not in a rush to buy, holding out could prove profitable if prices drop. But there’s no guarantee that they will. If you come across a home you love that’s priced right, and your current economic situation is stable, you might want to snap it up. Due to office closures and social distancing measures, buying a home now is a unique experience, but far from impossible.

There is a known shortage of homes for sale across the country. For potential buyers, and particularly first-time buyers, this makes finding a home that ticks off the items on their wish list and fits into their budget especially difficult.

The number of active listings fell nearly across the board in the most populous metro areas of the U.S., dropping 19%, on average, when compared with last year. Just two metros saw increased availability, Minneapolis and San Antonio, where active listings rose 8% and 3%, respectively. Twenty-three metros saw a drop of more than 20% from the first quarter of 2019 to the same period in 2020, and six dropped 30% or more.

Salt Lake City was one of two metros that saw a 40% fall in listings compared with the first quarter of 2019. However, in mid-2019, that metro had notable year-over-year increases in listed inventory. 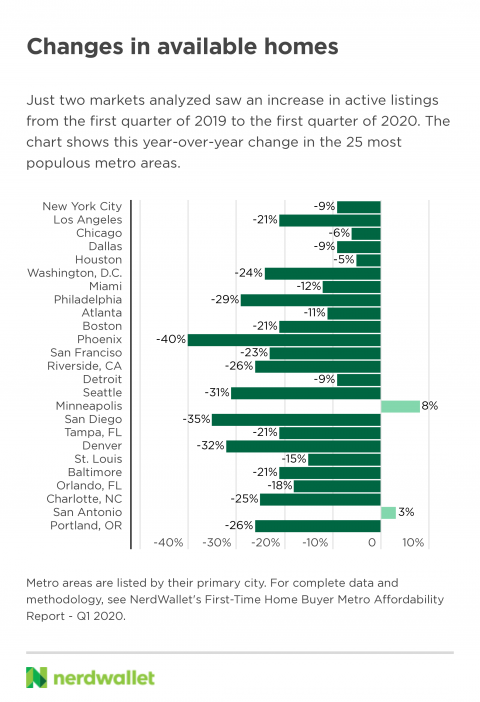 First-time buyer guidance: A lack of available homes for sale means buyers have to compete with one another for limited inventory. If you decide to put in an offer on a home in a scarce market, make it a competitive one, but steel yourself for a potential letdown. In this type of environment, it’s not unusual to make offers on multiple homes before going under contract.

Metro spotlight: Los Angeles buyers may be boxed out

The Los Angeles metro area is a costly place to buy a home, and potential first-time buyers were likely hit with serious sticker shock when they saw homes prices in the first quarter of 2020. From 2019 to 2020, list prices rose 21% from $748,000 to $953,000, on average in the first quarter, the most dramatic jump of all metros analyzed.

This near-million-dollar price tag made the Los Angeles metro area the furthest out of reach for first-time home buyers, costing about 12 times the median income for the 25-to-44 age group.

San Juan, Puerto Rico, is among the 50 most populous metros but was excluded from the analysis due to insufficient inventory data.

The article First-Time Home Buyers Priced Out in Major Metros Even Before Pandemic originally appeared on NerdWallet.

With our home & garden newsletter!