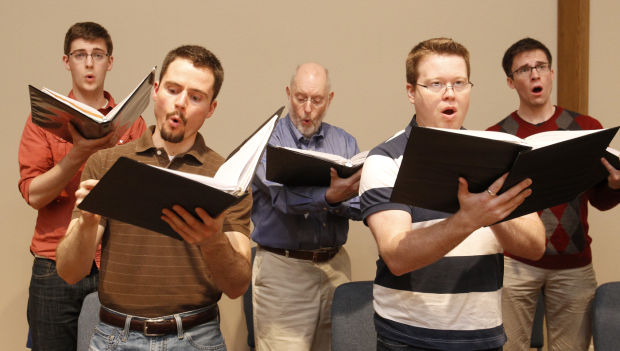 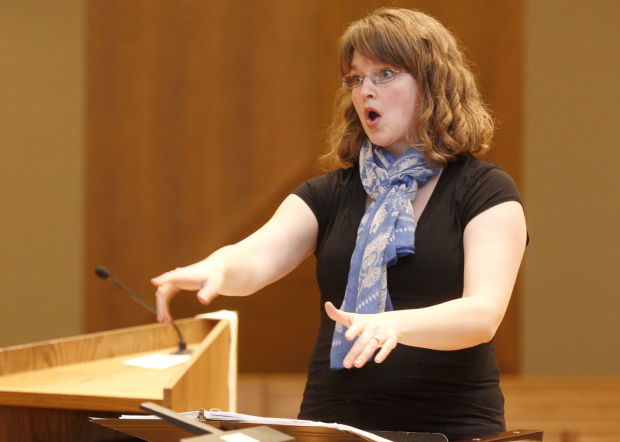 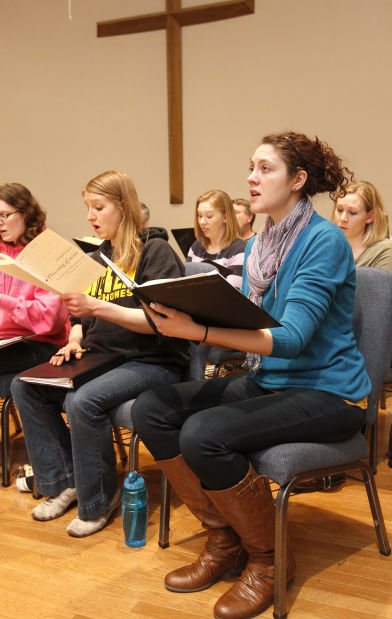 CEDAR FALLS, Iowa --- Legendary Notre Dame University coach Lou Holtz once said, "Ability is what you're capable of doing. Motivation determines what you do. Attitude determines how well you do it."

Add a big, thick notebook for keeping organized and you've pretty much summed up the determination and energetic nature of Alice Reid Pruisner, director of the recently formed Bel Canto Cedar Valley chorale. Wife and mother of two daughters ages 1 and 3 1/2, Pruisner is choir director at St. Timothy's United Methodist Church in Cedar Falls, and is working on her master's degree in choral conducting from the University of Northern Iowa.

It's what I love to do," said Pruisner, who grew up in Cedar Falls. She and her husband, Micah, who sings bass in the group, recently moved back to the Cedar Valley from the Quad Cities. She was surprised to find there was no chamber choir similar to the Les Hale Chorale, which disbanded in 2006. "That's when I decided I should start one. I thought the Waterloo-Cedar Falls area could support it."

Bel Canto Cedar Valley will present a spring choral concert, appropriately titled "Coming Home" at 3 p.m. May 12 at the Wartburg Chapel in Waverly, directed by Pruisner.

The name "Bel Canto" translates as "beautiful singing" in Italian, and the majority of the music is from the traditional choral canon, as well as folk songs, art songs, vocal jazz and commissioned work.

Getting started was a bit difficult, Pruisner said, because she started in July. That's where determination came in. "Everyone was gone on vacation, but I knew there were people who would be interested. I made a spread-sheet of churches from the phone book and emailed music teachers, and Facebook was helpful, too."

The first concert took place in October, followed by a winter concert in February. There are presently 27 members, ages 22 to 70, although she describes 32 to 38 members as "the sweet spot."

"When I'm looking at repertoire, I have to consider what is physically possible for us to perform, but really it doesn't limit us."

Singers are "independent," meaning they are expected to prepare notes and rhythms outside of rehearsal. Rehearsals typically take place Sunday evenings at St. Timothy's UMC.

The chorale is willing to perform in other venues and events.

Tony Reid describes his daughter as an "organizer. She's always been ambitious to tackle new projects." The retired Hansen Elementary School principal joined Bel Canto because "I love to sing. I wanted to support an excellent group, and it grows neurons because it's very challenging stuff she's having us sing. But she makes practice fun, too. That's part of it," he explained.

The Mother's Day concert May 12 is the last of BCCV's inaugural season, and will feature the world premiere of "This is My Song" by composer-in-residence Joseph Carey, as well as music by Faure, Verdi, Brahms, Mendelssohn, Copland, Barber and others. Pianist is Oxana Khramova.

"I'm passionate about promoting new composers and compositions for the choral canon. With the 'Coming Home' theme, my idea is to explore what home means to us, whether it's coming home to a place, a country, a faith, a person or the ultimate coming home that is death," said Pruisner.

Make sure you're not hurting your skin with these bad habits

Make sure you're not hurting your skin with these bad habits

CEDAR FALLS—Services for Andy K. Kaufman, 40, and Beckett E. Kaufman, 9, of Cedar Falls are pending with the Richardson Funeral Service in Ced…