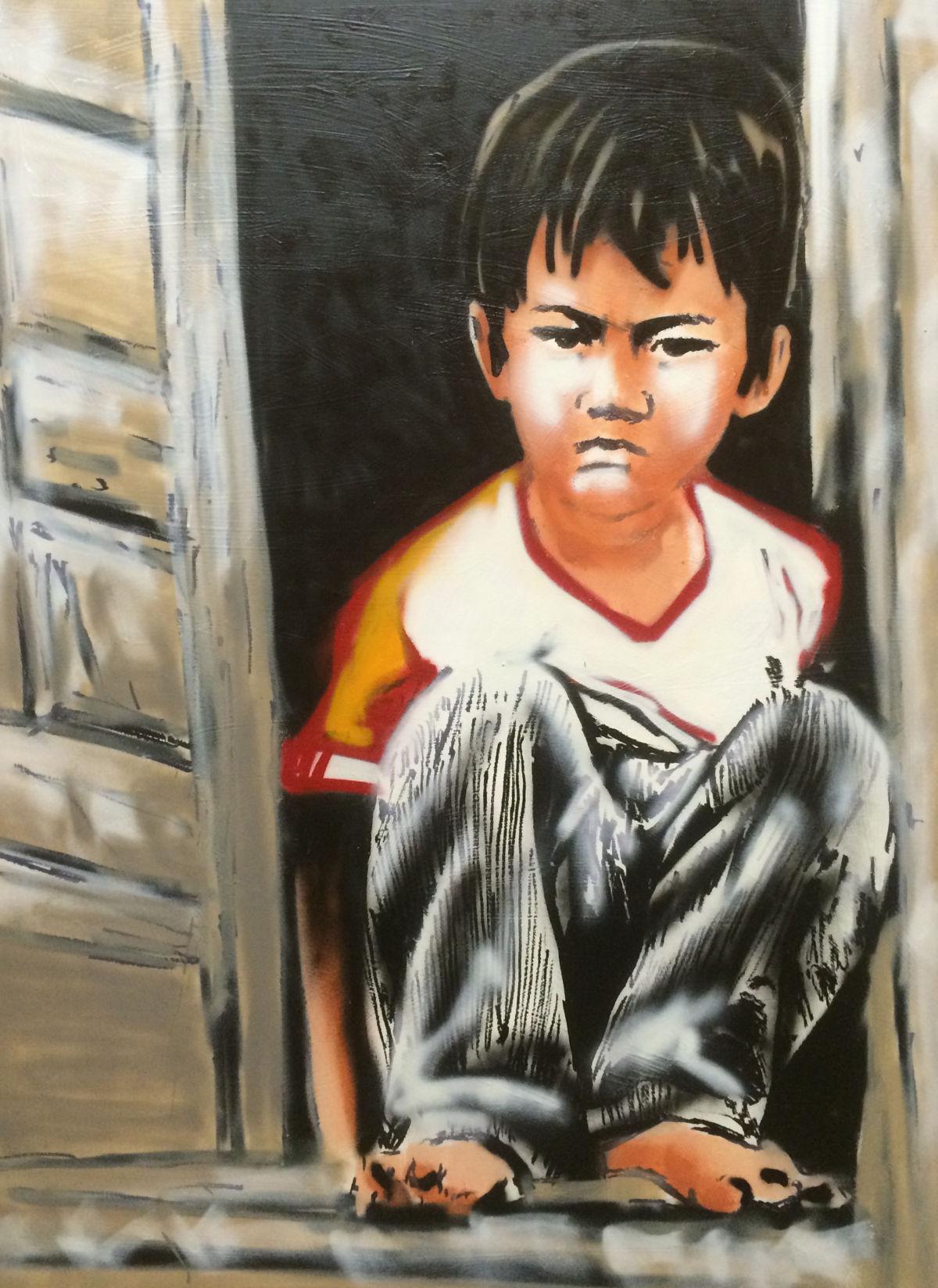 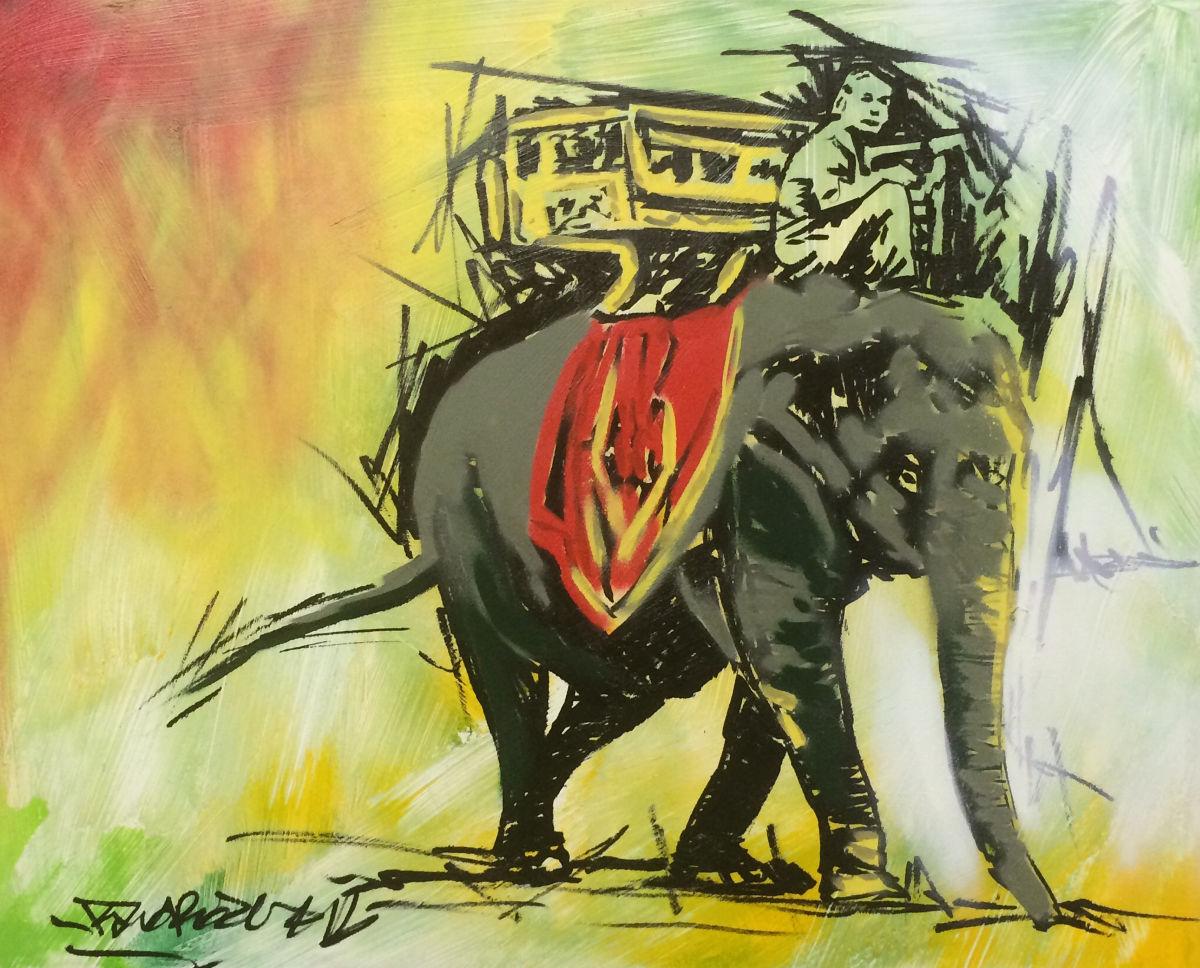 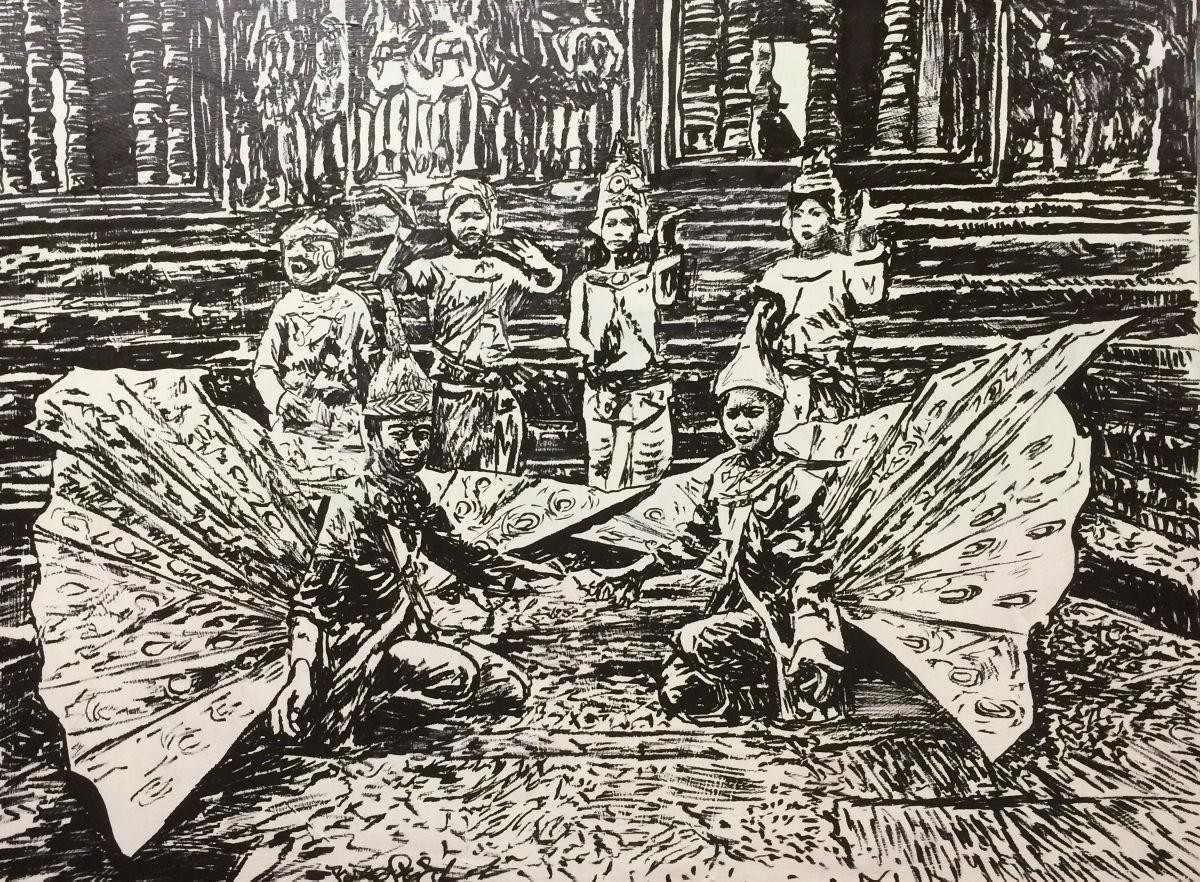 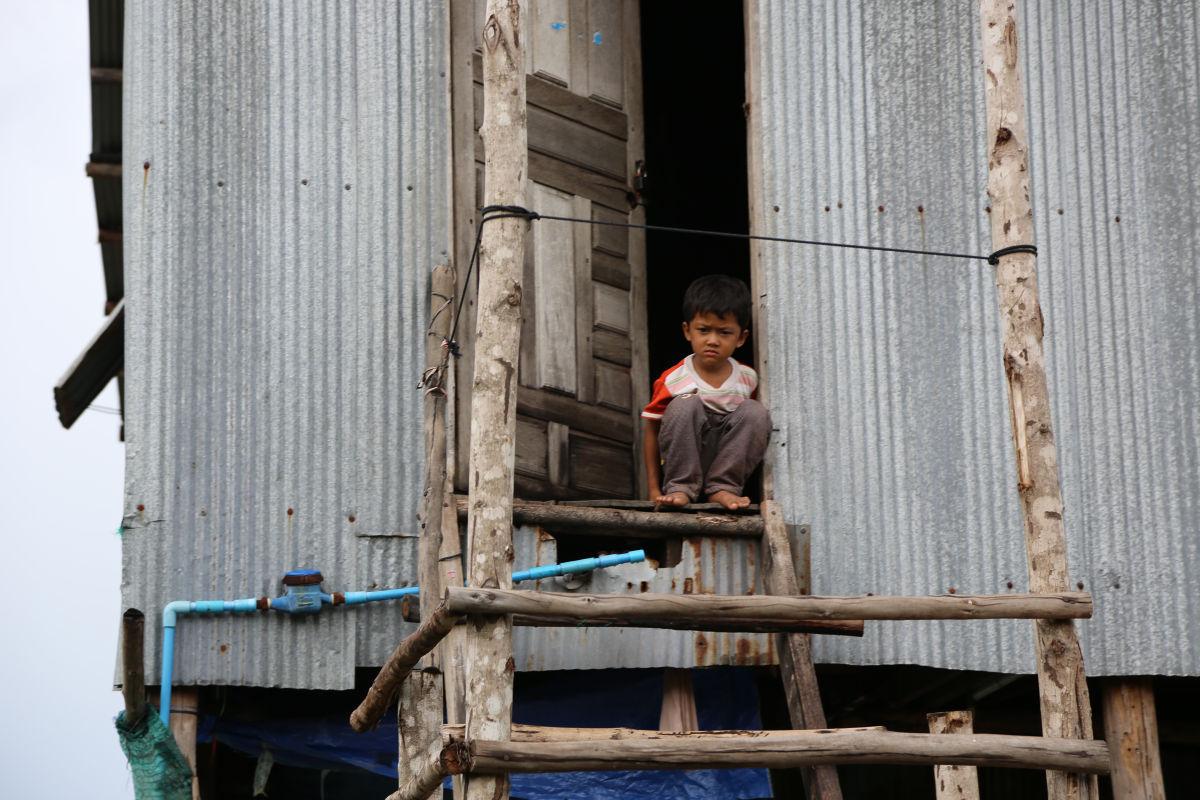 Paco Rosic captured this image of a Cambodian boy in a poor neighborhood of Phomen Pehn, and used it as inspiration for the completed canvas which hangs in the Gallery C exhibit in Dubuque.

Change is good, and artist Paco Rosic has made some pretty big ones recently.

His medium — spray paint — is the same as ever. But he’s shelved the nudes he’d grown accustomed to painting and the kinetic colors of a graffiti artist. In his latest work, he plays with black and white to absorb and reflect light, while gently infusing paintings with sunlit colors and radiant hues depicting people and scenes of Cambodia.

His collection, simply titled “Cambodia,” is on exhibition now through Sept. 27 at Gallery C in Dubuque. In addition, three large canvases recalling Rosic’s roots as tagger/graffiti artist are featured in the “Voices from the Warehouse District: Streets” exhibition at the Voices Gallery in Dubuque. The show opens Sept. 12 and runs through Oct. 2.

The Cambodian paintings reflect greater emotional depth than any previous works by Rosic since replicating Michelangelo’s Sistine Chapel on the ceiling of Galleria de Paco restaurant in downtown Waterloo.

“This is my first really emotional show. I don’t do that. I like expression and movement, not so much the emotions,” Rosic admits. Stunned by both the abject poverty and beauty of the culture, he “wanted to capture the people I saw, the way they looked and lived in those poor neighborhoods. In Cambodia, you are either super rich or super poor, nothing in the middle.

“So I took pictures and used the camcorder to record everything I saw. I took hundreds of photos I’m still going through, most of them from the window of a car. You don’t get out. I couldn’t believe how the poor manage to survived those conditions. I was moved by it all,” he explains.

The exhibition features 28 paintings, including canvas sketches and finished paintings, to show the progression of his artistic vision — in just two short months after spending 12 days in Cambodia, particularly Phnom Penh.

“I am so driven when I’m in the zone, and I produce like crazy. I want to capture the image that is still fresh in my mind, and with every piece, I felt like I was still there. That’s what I want people to feel when they see the paintings,” Rosic says.

Rosic was born in Sarajevo, Yugoslavia, in 1979, and displayed a talent for art at an early age. His family moved to Germany in 1992 during the Bosnian war which tore their country apart. Eventually the family immigrated to the U.S. in 1997, and settled in Waterloo. The artist has steadily built an international career as an artist.

Perhaps the biggest change — a life-altering one — happened on Aug. 16. That’s the day he married Sokontheary Ek, a Cambodian young woman he initially met through online gaming four years ago. After the breakup of a lengthy relationship left him heartbroken, Rosic decided to throw caution to the wind and traveled to Cambodia last summer to meet her in person.

Admittedly, he was “blown away. I feel like I’ve known Sokontheary forever, like I grew up with her or something.”

After 12 days, Rosic knew “this was the real thing, this was it. Yes or no – there is no middle for me.” Returning home to Iowa, he hired a lawyer to guide Ek through the lengthy process of getting a visa to travel to the U.S.

“The paperwork is a nightmare, and it takes so long. In Cambodia, U.S. visas are done like a lottery, and it can years,” Ek explains. Finally her papers were arranged, and she took the 30-hour flight from Phnom Pehn to Iowa. A few whirlwind days later, they were married.

She is completing paperwork to achieve legal status and a green card, and eventually, U.S. citizenship.

Rosic expects to complete at least 30 more Cambodian canvases before deciding “when to stop.” He laughs. “It’s tough being a grown up and wanting to paint like a little kid, to remind the child inside — the creativity — to have fun with it.”

Shuttered Galleria de Paco will not reopen as eatery, but become an art gallery

Paco Rosic's landmark downtown Waterloo restaurant Galleria de Paco is permanently closing, but the space will continue to showcase his art when it reopens as a gallery.

Financial Myths That Can Cost You When Home Buying

Dr. Birx: Masks can be a fashion statement

Dr. Birx: Masks can be a fashion statement

These social distancing tips can help you stay safe outside

These social distancing tips can help you stay safe outside

Paco Rosic captured this image of a Cambodian boy in a poor neighborhood of Phomen Pehn, and used it as inspiration for the completed canvas which hangs in the Gallery C exhibit in Dubuque.