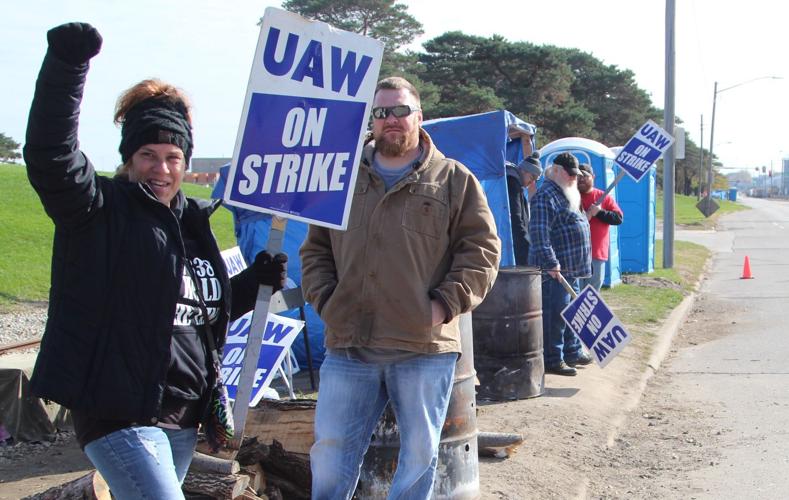 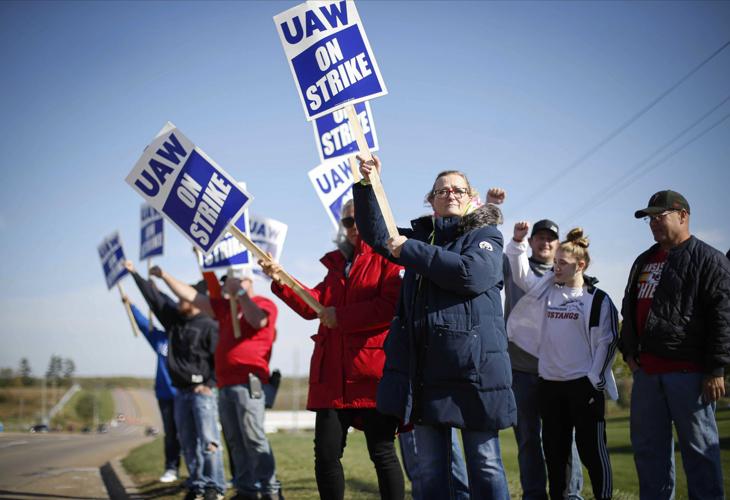 Members of the United Auto Workers strike outside of the John Deere Engine Works plant on Ridgeway Avenue in Waterloo on Oct. 15. 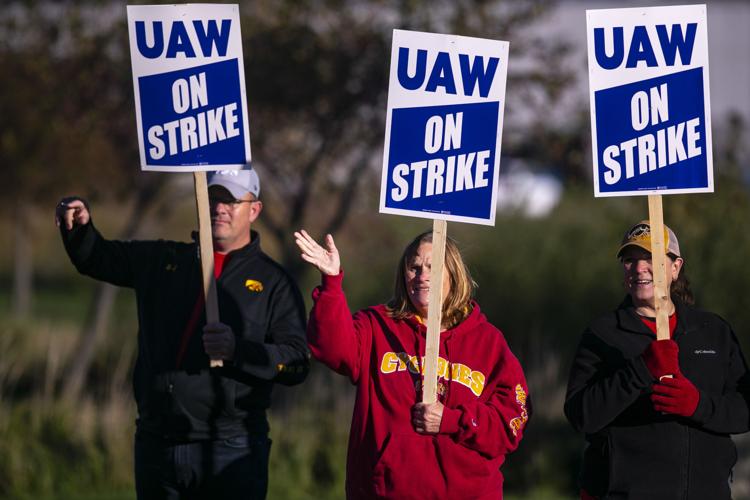 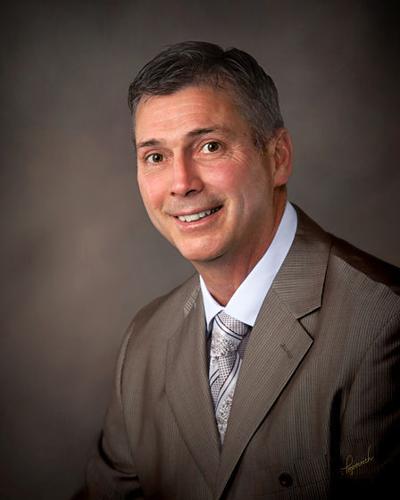 WATERLOO – It’s been an eventful year for Deere & Co., and for its Waterloo operations — the company’s largest manufacturing complex and its research and development hub.

More’s to come in 2022, with the anticipated production of an “autonomous” self-driving tractor.

And that despite labor issues.

The company needed to hire more workers to meet product demand. That resulted in a series of job fairs in Waterloo, the first such events Deere has held in at least 40 years.

Also, the company saw its first labor-related work stoppage since the five-month strike and lockout of 1986-87. United Auto Workers affiliated employees went on strike for six weeks. The company and union ratified a new agreement on the third try after two tentative agreements were rejected by UAW membership. For the second contract in a row, workers at UAW Local 838 in Waterloo voted against the companywide agreement, but it passed by a wide enough margin at other locations to win approval.

“Our results reflect strong end-market demand and our ability to continue serving customers while managing supply-chain issues and conducting contract negotiations with our largest union.”

There’s a saying that the best agreement is one neither party is completely happy with. However, in addition to financial and benefit gains, a regional UAW official with Waterloo ties said the agreement provides an opportunity for the company and union to work together on common challenges such as staffing and the timely delivery of supplies and materials to meet both production demands and employee pay incentive goals.

“I would say their forecast would be probably strong for the next at least six to eight years, depending on how everything evolves,” said Ron McInroy, formerly of Waterloo and the UAW’s 17-state Region 4 director in Ottawa, Ill., near Chicago. McInroy was hired at Deere in Waterloo in 1979, joined the UAW, rose through the ranks, and became regional director in 2010.

In his earnings statement, May said, “Looking ahead, we expect demand for farm and construction equipment to continue benefiting from positive fundamentals, including favorable crop prices, economic growth, and increased investment in infrastructure.”

“That’s the heavy technology; that’s John May, his foresight and his leadership” McInroy said. “They’ve been working on that a long time.”

“If you look at ag-imp (agricultural/implement) industry as a whole, the technology from GPS standpoint is enormous,” McInroy said. “All your equipment — whether it’s road graders, bulldozers, tractors, combines, anything — it all has GPS systems. ... The farmers and construction operators — whether it’s the output in the field, whether it’s how much fuel being used per acre, how much fertilizer — all that stuff is being monitored so much closer because of technology. The farmer can know how his yield’s coming in. It’s amazing.”

The company expects supply-chain pressures will continue. Workers have a keen interest in that as well, because it affects their pay under the company’s Continuous Improvement Pay Plan, or CIPP, which replaced the standard hourly incentive pay plan nearly three decades ago.

“If those guys don’t have the parts to run, that affects their (pay) system,” McInroy said. “It was a key issue from the beginning (of contract talks), and it was a key issue until it got settled in the end. ... People from the outside didn’t understand it, but the members on the inside do understand it because that’s their paychecks.”

Ultimately, the company listened. “Each time a contract got turned down, you had to listen to what the key issue is,” McInroy said. Members clearly made their concerns known.

“It isn’t just at contract time you sit down and discuss these things” McInroy said. “Some of these things have to be monitored and worked on” throughout the life of the agreement. “So you have to put the language in there, so you have the avenue to address these issues as they evolve.”

The supply issue centers around the pandemic, McInroy said, along with labor shortages. The new contract should address that because it should attract workers.

“All in all, if you look at the contract, if it is not the best, it’s one of the best, in all of the manufacturing world, in the United States anyway,” McInroy said. That includes restoration of cost-of-living adjustments and retirement provisions. “The agreement today puts Deere back in the category where, it’s not just a job, it’s a career. ... Plus, it’s all tied to the success of the company.”

Conditions leading up to the agreement favored workers. “The company’s making good money,” McInroy said. “They have record (profits) going on, for different reasons. It’s not all product; it’s technology. This time around was the best position that you could be in to advance,” and the workers stood up for what they felt they had coming.

“They did stand up for it,” McInroy said. “The communities, the other labor organizations, supported them too. That’s a huge thing.”

“I believe what we brought back, and what we have in place now, has separated Deere from some of the other employers in the area,” said “I believe it makes Deere the premier place to come and work in the Cedar Valley again – where it used to be back in the ‘70s and ‘80s.”

“I don’t think there’s a shortage of people to work. I just think there a shortage of companies wanting to pay people what they should be getting paid to come to work,” said Frickson. He feels the new Deere-UAW contract accomplishes that.

For example, Frickson said, when he was hired 18 years ago there was a 90-day wait before you received insurance. After the 2015 agreement, it was seven months. “Now it’s down to 30 days. It’s unprecedented. That’s huge.”

Other gains were made in pension and retirement benefits, parental leave, and in active employees’ vision benefits, for example. Plus there’s a guaranteed 20% cumulative wage increase over the life of the contract, protected by the cost-of-living adjustments.

While the agreement was voted down locally all three times it came up for a vote, it was ratified by unionized works companywide.

Frickson indicated there was a lot of incorrect secondhand information being put out over social media.

“Social media was the biggest hurdle we had to overcome, hands down,” he said, in conveying the true details of the agreement to workers.

But Frickson has seen that, once workers are able to have the agreement explained to them firsthand, they see its benefits more.

“I don’t know if people are going to fully appreciate this agreement until they get ready to retire and see what kind of money is out there available to them” Frickson said. “I hope they appreciate it now. I hope that people are starting to see and understand what it is, what’s actually out there and what’s been done for them.” Right now, the membership averages about 42-43 years of age with 12-13 years’ service.

It improves retirement benefits for workers hired after the 1997 labor agreement. “This gives us an opportunity to retire with some money in your pocket to be able to help pay for insurance, get out the door, and then let the company hire our kids to come in. Get the old guys out, bring the new generation in,” he said. “This agreement does that.”

Ty Burke: Guided by faith, he pours his heart into career and community

The partner and business solution advisor for the Accel Group is guided by his faith and a vision for helping his co-workers and the community.

“CAPS is about helping students find their purpose,” said Droste. “It’s trying to help them figure out what they were meant to do or what they were wired to do."

Jordan Dunn: At Pathways, he helps heal people by believing they have value

The clinical director for Pathways Behavioral Services loves working in addictions treatment and the teaching opportunities he's had in foster parenting and social work.

Edita Begic: Creating change, impacting community and giving back for her second chance

Cedar Valley real estate agent Edita Begic has come a long way since a childhood in Bosnia shattered by civil war that eventually brought her family to Iowa.

Kingsley Botchway: Passionate advocate for the people and causes he serves

Kingsley Botchway, UnityPoint Health’s regional director of human resources, doesn’t just talk the talk. He walks the walk when it comes to giving back to the world.

The vice president of strategy at AMPERAGE Marketing & Fundraising works to empower her team members as a 'bottom-up leader, instead of a top-down leader.'

CEDAR FALLS — Three laureates and an entrepreneur were inducted into the Cedar Valley Business Hall of Fame on Oct. 20.

Members of the United Auto Workers strike outside of the John Deere Engine Works plant on Ridgeway Avenue in Waterloo on Oct. 15. 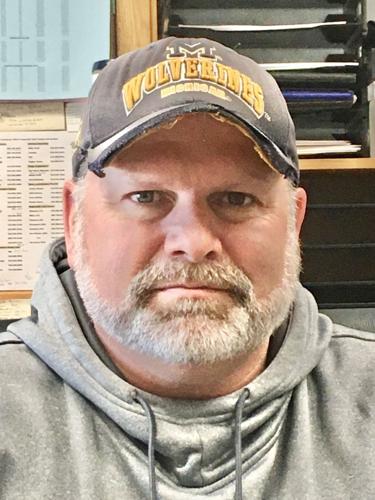