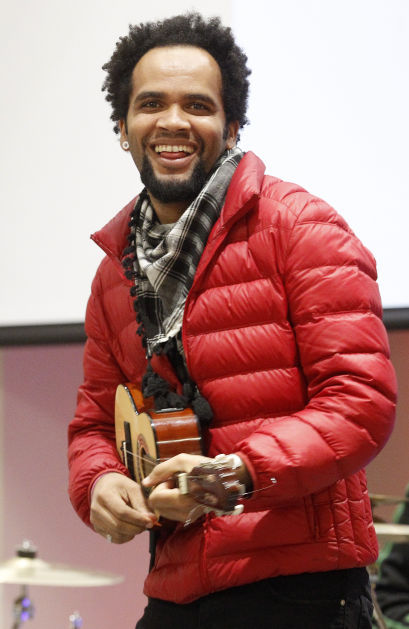 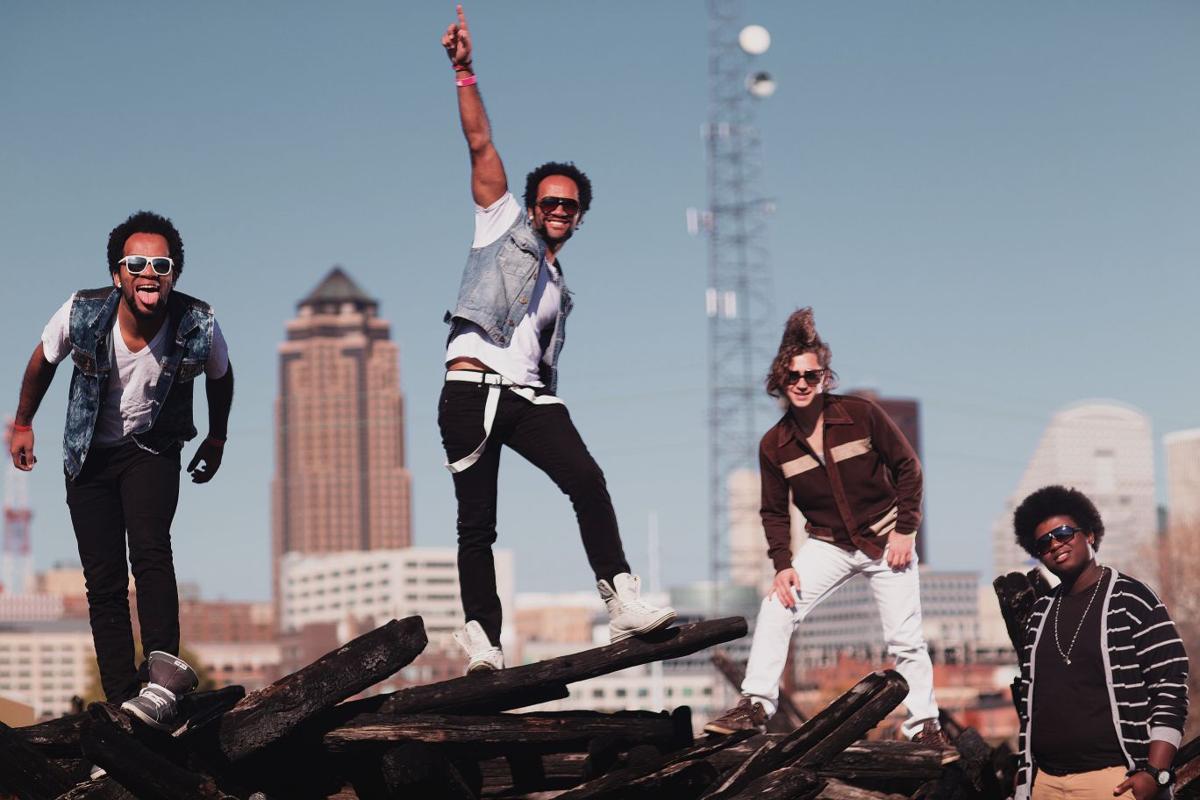 The Brazilian 2wins will put on three shows this weekend at Lampost Theatre in Cedar Falls. 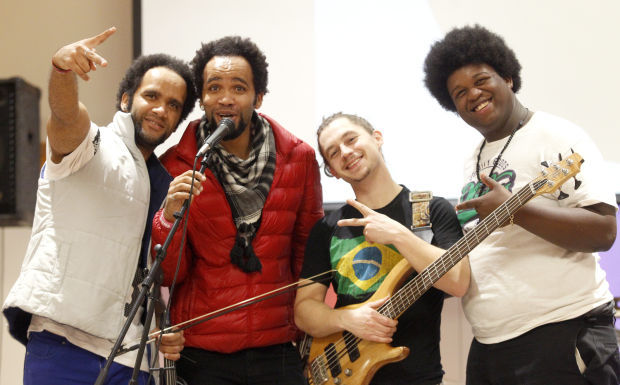 Brazilian 2Wins Walter and Wagner Caldes stop between songs to pose for a photo along with bass guitarist Riley Scheetz and drummer RaQwon Reed during the Art from the Heart for El Salvador fundraiser at the University of Northern Iowa in February. 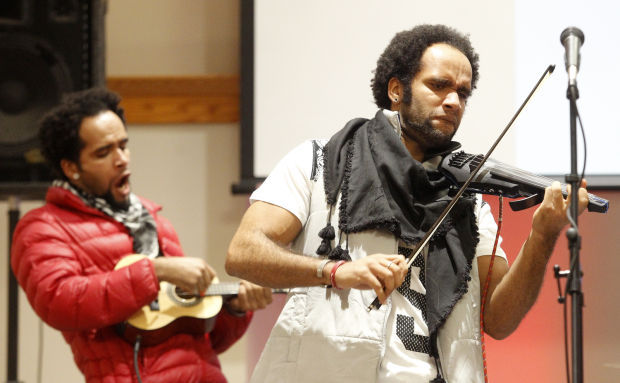 Brazilian 2Wins Walter, left, and Wagner Caldes perform during the Art from the Heart for El Salvador fundraiser at the University of Northern Iowa in February. 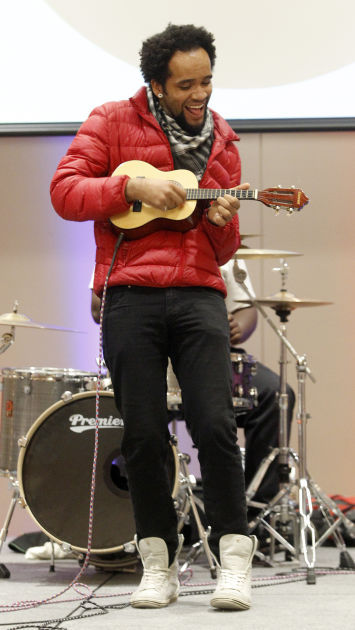 Brazilian 2Wins Wagner Caldas has undergone cancer treatment and is now in remission.

WATERLOO | In a YouTube video released at the end of September, Wagner Caldas, half of the Brazilian 2wins duo, announced that he's "beating cancer." In the video, Caldas said his tumor has shrank "at least 90 percent."

WATERLOO | Less than two months into Wagner Caldas’ battle with Ewing’s sarcoma, a rare form of cancer, the disease has already cost him some movement in his left hand. Chemotherapy has taken away entire days of activity. The disease could still cost him his arm and maybe his life.

But the diagnosis hasn’t shaken Wagner's optimism and enthusiasm.

Anyone who has seen the Brazilian 2wins in concert knows the energy and enthusiasm they engender. It’s an essential part of their shows, said Wagner, one of the band’s namesake twins born in Brazil.

“It’s very important that our crowd have fun and not just listen to music,” he said.

His unbridled joy on stage isn’t a performance -- it’s who he is.

“I’ve never been down or sad or cried about the cancer stuff,” Wagner said. “I’ve had nights where I’ve laid awake and thought about it.”

If a cancer diagnosis at age 30 on the upswing of a promising musical career doesn’t dim his spirits, what would?

Wagner is quick to point out his blessings. Doctors are optimistic the cancer was caught early enough to treat, he said. He has family in his corner, including twin brother Walter, and has seen an outpouring of support from friends, fans and strangers.

Wagner added he has, by many measures, already beaten the odds. In the Brazilian neighborhood he comes from, less than half of the males born there can statistically expect to live past age 25. He has performed for audiences around the U.S. The group also toured his home country of Brazil about a year ago.

“I’ve gone through a lot of adventures,” he said. “This is another one of my adventures.”

For family, friends and fans news of Wagner’s diagnosis was a shock. But for Wagner, it solved a year-long mystery. He'd noticed numbness and pain in his fingers on his left hand. It began affecting his playing. He eventually had surgery on a nerve in his elbow, but that didn’t solve the problem. Wagner and his playing continued to suffer.

“There are videos of shows where you see me going like this,” he said, shaking his hand like he’s trying to shake off pain. “Or you see me just jumping around and not playing.”

Wagner is undergoing chemotherapy, which will be followed by radiation treatment and possibly surgery. For most patients of Ewing’s sarcoma, surgery usually follows chemo, but doctors are working to save Wagner's arm. However, he might still lose his left arm. It's a scary prospect, Wagner admits, but his optimism remains.

“I think about it and I think about playing keyboard,” he said, tapping the table with the fingers of his right hand as if the surface were a keyboard. He calls out to Brazilian 2wins bass player Riley Scheetz during his imaginary jam:

Wagner shares his optimistic attitude with his twin brother, who he said took news of his cancer in stride. Upon learning of his brother's diagnosis, Walter immediately started planning to bring family to the area to help.

When the band played at the annual 80/35 music festival in Des Moines this summer, Wagner made sure to keep the news between him and his brother.

“I didn’t want the guys to know and disturb the mindset of the show,” he said.

That was the last time Wagner played a show with the band. He plans to performing at the RiverLoop Amphitheater in downtown Waterloo on Saturday. But it depends on how he feels.

“You never know,” he said. “I’ve got some bad days and other days I don’t even know I have cancer.”

Wagner still plays his electric ukulele, but lately it has become more difficult.

“I have to concentrate way more on something that came naturally,” he said.

The Brazilian 2wins show at the RiverLoop Amphitheater was originally scheduled in July. The new date has given the band a chance to promote the event as a fundraiser for Wagner and a show for cancer awareness. The group has performed at several cancer fundraisers in the past, but it will be the first such show since Wagner's diagnosis. He said it’s unfamiliar territory to be on the receiving end.

“You try to relate, but I never thought I’d be here,” he said. “I’m very proud to be part of this type of awareness.”

Wagner said the outpouring of support has been touching.

“I know I’m not alone,” he said. “It makes it even harder to get sad or negative; they make me feel like I’m doing something right.”

Brazilian 2wins musician back after battle with cancer

WATERLOO — Wagner Caldas says he was ready for a haircut before being diagnosed with cancer.

The Brazilian 2wins will put on three shows this weekend at Lampost Theatre in Cedar Falls.

Brazilian 2Wins Walter and Wagner Caldes stop between songs to pose for a photo along with bass guitarist Riley Scheetz and drummer RaQwon Reed during the Art from the Heart for El Salvador fundraiser at the University of Northern Iowa in February.

Brazilian 2Wins Walter, left, and Wagner Caldes perform during the Art from the Heart for El Salvador fundraiser at the University of Northern Iowa in February.

Brazilian 2Wins Wagner Caldas has undergone cancer treatment and is now in remission.