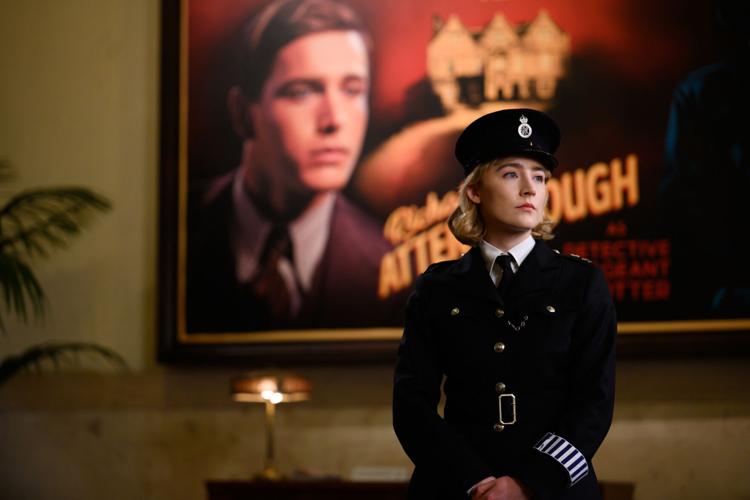 Saoirse Ronan plays a constable hoping to learn how to solve a murder in "See How They Run." 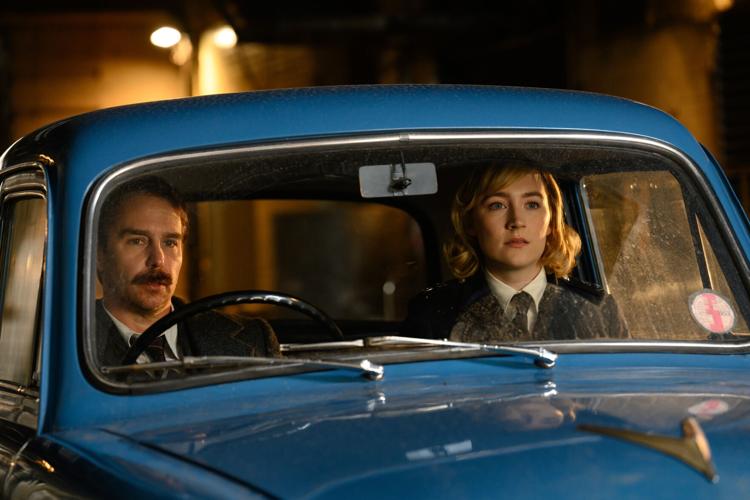 Sam Rockwell and Saoirse Ronan star in "See How They Run."

If you’ve wondered why they’ve never made a film out of Agatha Christie’s play, “The Mousetrap,” it’s because she had a clause in her contract saying it couldn’t happen until the play closed.

The rub? The play is still running.

While that clause may not be true, it makes a great plot point for “See How They Run,” a whodunit that circles around the original London production.

At a party to celebrate the 100th performance, the cast, the producer, a playwright, the theater manager and a Hollywood director are thrown together and expected to make nice. Instead, the director (played by Adrien Brody) winds up dead and somebody has to atone for the sin.

Inspector Stoppard (Sam Rockwell) and a new recruit, Constable Stalker (Saoirse Ronan) step in to figure out. They interview everyone (including Richard Attenborough, who happened to be in the original company) and come to several wrong conclusions.

Ronan, in particular, is good at connecting the dots and helping audiences understand what the hidden meaning here is. She comments in places she shouldn’t, sizes up her partner’s problems and isn’t afraid to play naïve when it best moves the narrative.

Because all cases aren’t cut and dried (although having everyone in the room should be a way of narrowing the focus), “See How They Run” often goes off on tangents it shouldn't. Director Tom George plays up the humor but often has long stretches that go nowhere. Each time one character wears out his or her welcome, another enters the picture.

The structure is very much like the play it’s chronicling.

Still, there’s an element here that seems very pedestrian. Rockwell’s character has more than a few issues of his own (including a relationship that went bad) and a drinking problem that could hinder that resolution coming anytime soon.

Ronan’s character is much more straightforward. She wants to pass her exams and move up in the system. When they’re together, Stoppard (get the reference? Tom Stoppard wrote his own "Mousetrap" show) and Stalker have a way of making us think there’s more here than there is.

Harris Dickinson has the right swagger to play Attenborough, even though he’s much taller than the Oscar-winning director. He brings the attitude necessary to suspect everyone in the building.

When the resolution is revealed, it’s obvious but in keeping with what has transpired. “See How They Run” may not be as sly as “Knives Out,” but it could have a long run on stage.

As sturdy as “The Mousetrap”? No, but it holds interest.

Actor and wrestling legend John Cena broke the World Record for most wishes granted through the Make-A-Wish Foundation.

Her riveting performance as the cruel and calculating Nurse Ratched in "One Flew Over the Cuckoo's Nest" won her an Academy Award. She was 88.

James Earl Jones is hanging up his cape as Darth Vader

James Earl Jones will not record new lines for new "Star Wars" projects. But his voice will live on.

DVD REVIEW: 'Sound of Metal' tests the boundaries of senses

If you didn’t get to see “Sound of Metal” when it was in its Oscar run, do watch it now. Available on DVD, it’s a mesmerizing journey into the world of the deaf.

Gwyneth Paltrow had fears about being seen as an "evil stepmother"

Gwyneth Paltrow had fears about being seen as an "evil stepmother"

Saoirse Ronan plays a constable hoping to learn how to solve a murder in "See How They Run."

Sam Rockwell and Saoirse Ronan star in "See How They Run."