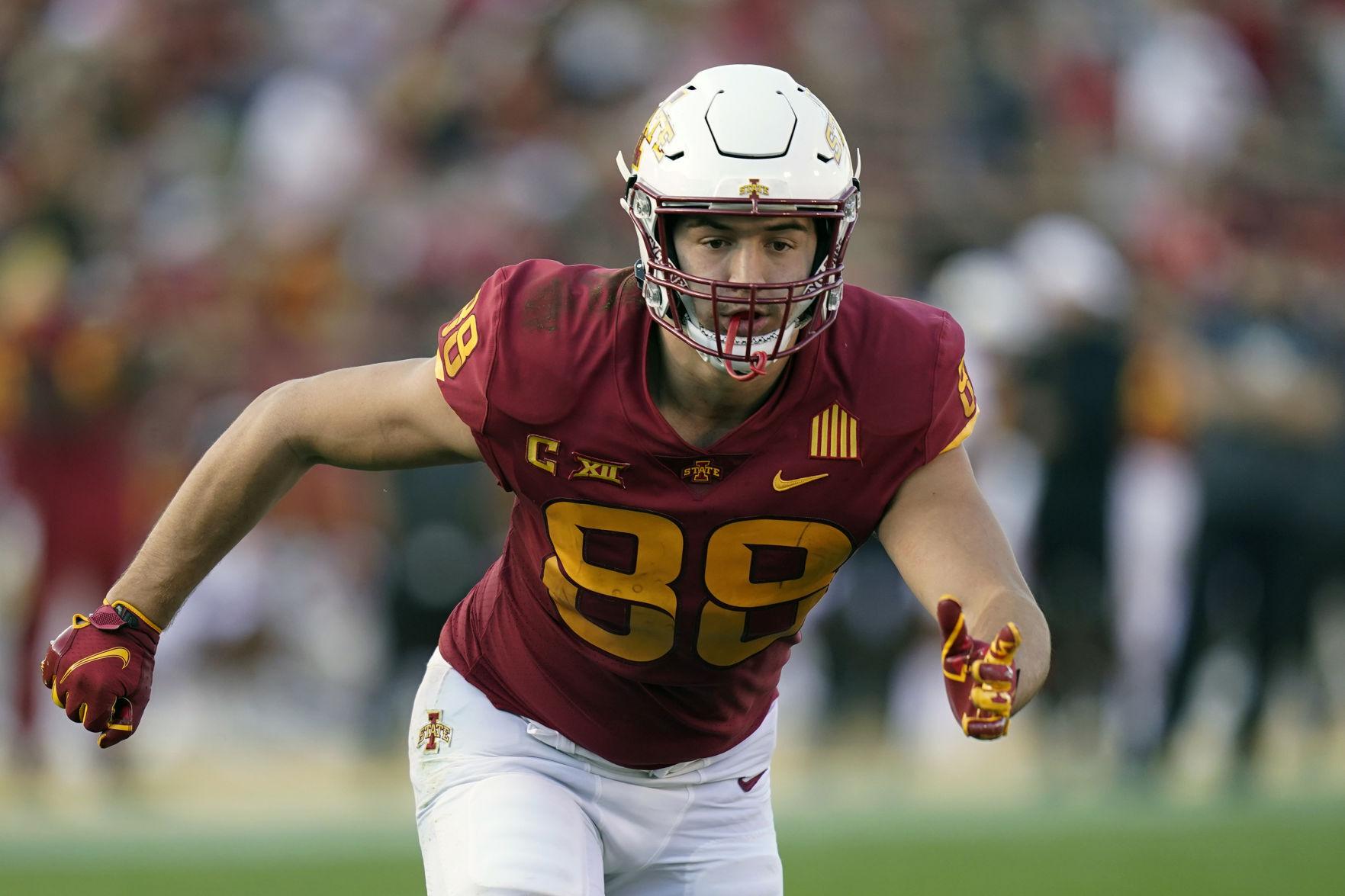 Iowa State tight end Charlie Kolar runs on the field during the second half of an NCAA college football game against Texas Tech, Saturday, Oct. 10, 2020, in Ames, Iowa. Kolar, Chase Allen and Dylan Soehner came into the season as perhaps the most celebrated group of tight ends in the country, and they still are. (AP Photo/Charlie Neibergall) 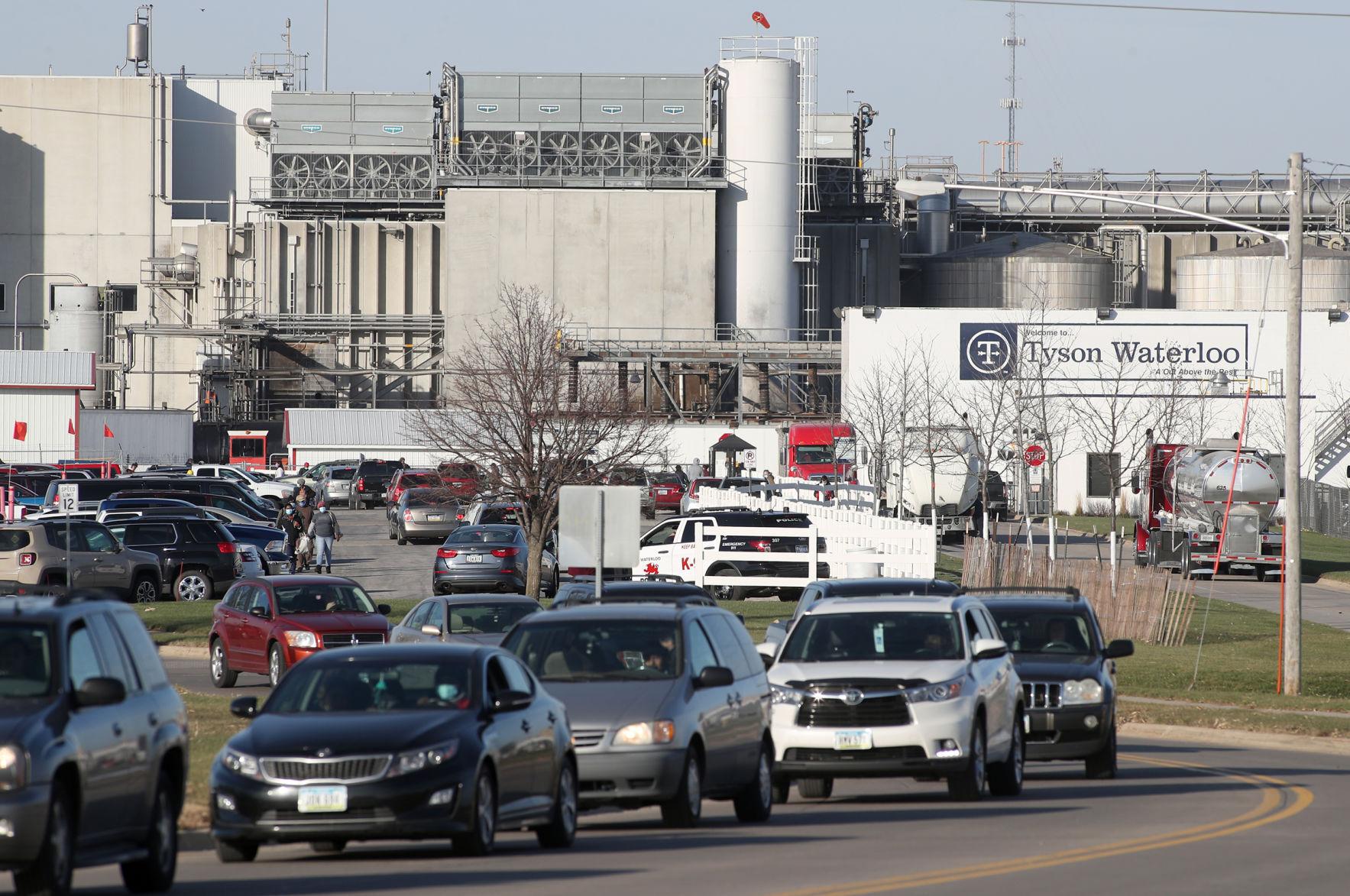 The changes at Cedar Valley Catholic Schools and Dunkerton Community School were posted on their websites.

Columbus High School is the focus of the CVCS efforts due to staff absences, according to a message from Chief Administrator Tom Novotney. He said there has been a reduced availability of substitutes as more teachers are out of the classroom.

School was not in session Thursday or Friday at Columbus for staff professional development. On Monday and Tuesday ahead of Thanksgiving break, ninth graders will move to online learning so the school can better cover staffing needs while other students continue with in-person classes. After Thanksgiving, from Nov. 30 to Dec. 4, all high school students will move to virtual instruction.

Dunkerton will remain in-person through Thanksgiving break. No school will be held Nov. 30 as a staff professional development day is moved up. All students will then move to virtual learning Dec. 1-2.

Both systems were involved in discussions with Black Hawk County schools leading to an announcement earlier this week that the Waterloo and Cedar Falls community schools will have five days of online learning before and after Thanksgiving.

The letter continues: “By taking the days after Thanksgiving Break, we will be able to mitigate some of the potential contacts following the Thanksgiving Holiday. Despite the request from elected and health officials for Iowans to limit gatherings, families will likely be around others during the holiday week and going virtual gives students a chance to stay safe at home for an additional six days following Thanksgiving Day.

“Data supplied by Black Hawk Public Health indicates that on average the virus has a four to seven day incubation period,” the administrators wrote. “The district will ask parents to report any potential absences on Tuesday, December 1 in order to plan for resuming face to face instruction on Thursday, December 3.”

Novotney’s message also raised the possibility of further online learning, but because of staffing issues.

“Please know that this is our first step towards moving all CVCS students to virtual instruction if we are unable to staff our classrooms,” he wrote. “We encourage families to continue doing your part to help limit the spread of COVID by limiting group gatherings, washing hands frequently, staying home when you are sick and wearing a mask when social distancing is not possible.”

A Cedar Valley Catholic Schools’ spokeswoman said staffing shortages have “consistently” been higher this fall for grades six to 12 than for elementary and preschool classes. When students learn online, she added, “classes will be live-streamed with an option of on-demand to allow for family flexibility.”

Students in preschool through eighth grade at CVCS are continuing in person. However, parents can choose to move their children to online instruction for December or continue it if that’s what they are already doing.

Novotney said absences at each CVCS campus “are less than 8% and have not exceeded 8% in the last two weeks.” 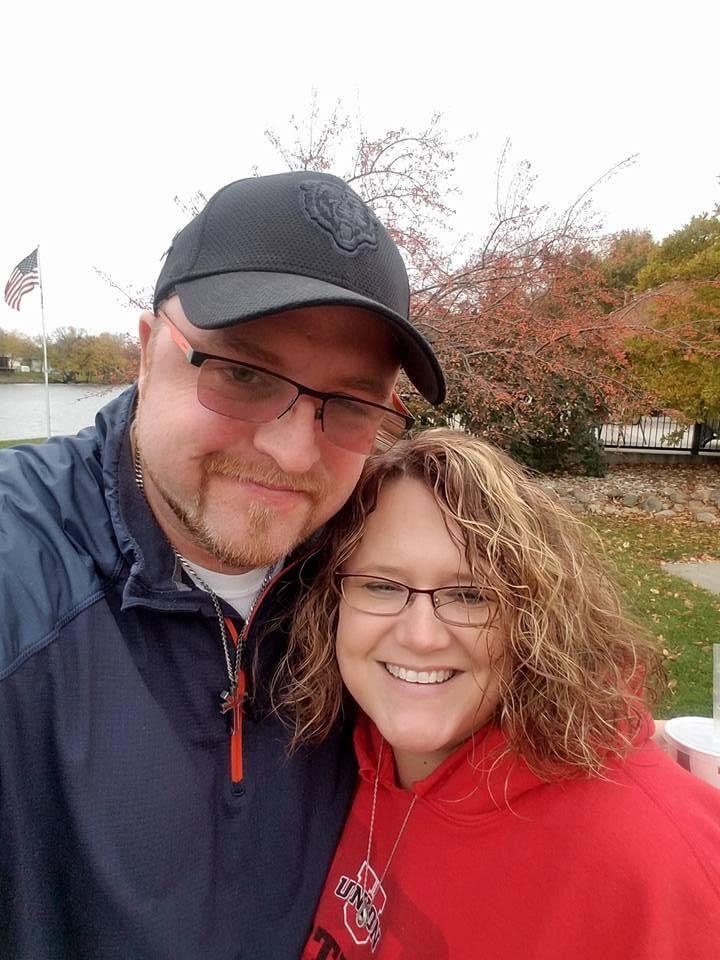 Chad and Tami Adelmud lead Heartland Community Church in La Porte City in supporting the community during the coronavirus pandemic by giving free meals and delivering necessities to local residents.

The local health department turned over contact tracing to the Iowa Department of Public Health in April due to the high number of cases. Now as cases reach the highest point of the pandemic, the county again has asked for state help. IDPH will provide some staff members to do contact tracing and disease investigation for the county, Egbuonye said.

Egbuonye said her department is able to hire up to 40 contact tracers, but she knows adding staff would be a “financial burden” to the county.

“It’s very difficult,” Egbuonye said. “We’re very tired — public health is tired, the same as the health care workers, and the entire community. But we have to push through.” 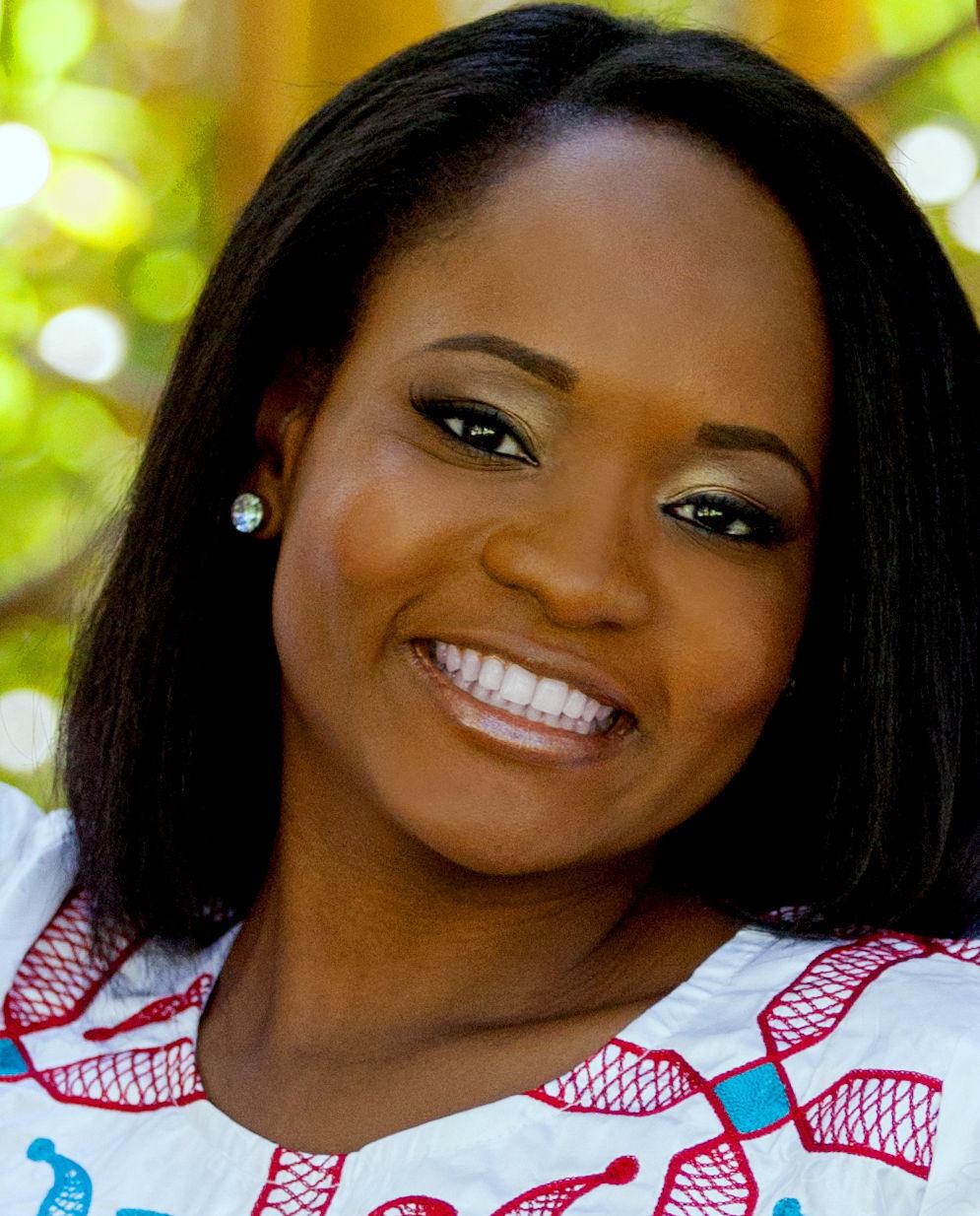 The department has two full-time epidemiologists who oversee tracing efforts and serve as liaisons in the community. Egbuonye is in the process of hiring another epidemiologist.

Contact tracers try reaching people who tested positive through phone calls and text messages, and if that doesn’t work, they’re now sending physical letters in the mail. The tracers aim to educate people about the virus, preventive measures and symptoms.

“We are calling because we care about them,” Egbuonye said. “This is not an invasion of privacy. This is because we want to make sure they are taking the necessary steps for their health.”

Some people are not answering messages from the health department — an issue that began in October. The department publicized its phone number, hoping it would stop people from ignoring an unrecognized caller.

Due to the high number of COVID-19 cases, contact tracers are focusing on certain groups before others. This includes 19-24-year-olds, who make up the largest group of local positive cases. They also prioritize children K-12, people over the age of 65 and workers who can’t always socially distance.

Egbuonye said the goal of public health officials should be “unification” during the pandemic, regardless of political affiliations. She asked elected officials to continue telling residents to wear masks, socially distance and wash their hands.

President-elect Joe Biden participates in a meeting with the National Governors Association's executive committee at The Queen theater Thursday in Wilmington, Del.

ATLANTA — A hand tally of ballots cast in Georgia for the presidential race has been completed, and it affirms Democrat Joe Biden’s narrow lead over Republican President Donald Trump, according to results released Thursday by the secretary of state’s office.

The Associated Press declared Biden the winner of Georgia and its 16 Electoral College votes on Thursday, after the hand count confirmed the former vice president leads Trump by roughly 12,000 votes out of almost 5 million counted.

The complete hand recount stemmed from an audit required by a new state law and wasn’t in response to suspected problems with the state’s results or an official recount request. The secretary of state’s office has until Friday at 5 p.m. to certify the election results. The results that will be certified are the totals certified by the counties, not those resulting from the audit, elections officials have said.

The governor then has to certify the slate of presidential electors by 5 p.m. Saturday.

The counties were supposed to finish the hand count by 11:59 p.m. Wednesday. Results were posted on the secretary of state’s website Thursday evening.

“Every single vote was touched by a human audit team and counted,” said Gabriel Sterling, who oversaw the implementation of the state’s new voting system for the secretary of state’s office. “Obviously, the audit confirms the original result of the election, namely that Joe Biden won the presidential contest in the state of Georgia.”

Once the state certifies the election results, the losing campaign has two business days to request a recount since the margin remains within 0.5%. That recount would be done using scanners that read and tally the votes and would be paid for by the counties, the secretary of state’s office has said.

Meanwhile, Trump and his allies took increasingly frantic steps to subvert the results of the election, including summoning Michigan’s Republican legislative leaders to the White House for an extraordinary meeting Friday as part of a long-shot bid to overturn President-elect Joe Biden’s victory.

Among other last-ditch tactics: personally calling local election officials who are trying to rescind their certification votes in Michigan, suggesting in a legal challenge that Pennsylvania set aside the popular vote there and pressuring county officials in Arizona to delay certifying vote tallies.

Biden met Thursday with governors from both parties and criticized Trump’s unprecedented attempt to block the peaceful transition of power, saying it hinders the flow of information about programs to develop a vitally important coronavirus vaccine.

“Unfortunately, my administration hasn’t been able to get everything we need,” Biden said during a video conference with the National Governors Association’s leadership team, which consists of five Republicans and four Democrats.

Election law experts see Trump’s post-election tactics as the last, dying gasps of the Trump campaign and say Biden is certain to walk into the Oval Office come January. But there is great concern that Trump’s effort is doing real damage to public faith in the integrity of U.S. elections.

“It’s very concerning that some Republicans apparently can’t fathom the possibility that they legitimately lost this election,” said Joshua Douglas, a law professor at the University of Kentucky who researches and teaches election law.

“We depend on democratic norms, including that the losers graciously accept defeat,” he said. “That seems to be breaking down.”

Trump’s own election security agency declared the 2020 presidential election to have been the most secure in history. Days after that statement was issued, Trump fired the agency’s leader.

The president’s constant barrage of baseless claims, his work to personally sway local officials who certify votes and his allies’ refusal to admit he lost could have a lasting negative impact on the country. Legions of his supporters don’t believe he lost.

“It’s about trying to set up the conditions where half of the country believes that there are only two possibilities, either they win or the election was stolen,” said Justin Levitt, a constitutional law scholar and professor at Loyola Law School. “And that’s not a democracy.”

The two GOP canvassers in Michigan’s Wayne County said in a statement late Wednesday they lacked confidence that the election was fair and impartial. “There has been a distinct lack of transparency throughout the process,” they said. But there has been no evidence of impropriety or fraud in Michigan, election officials said.

In another development, the Wisconsin Elections Commission issued an order Thursday to recount more than 800,000 ballots cast in two heavily liberal counties at Trump’s request. The order, required by law after Trump paid $3 million for the recount, was agreed to after rancorous debate for more than five hours Wednesday night that foreshadows the partisan battle ahead. 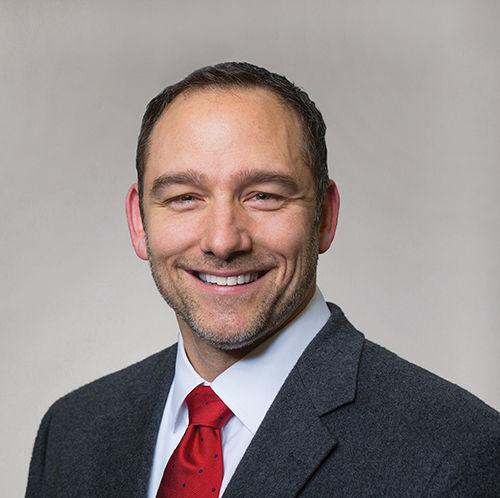