UNI Panther Marching Band brass players were protective masks and bell covers on their instruments during a rehearsal for their upcoming outdoor concerts.

Band members listen to instructions during a UNI Panther Marching Band rehearsal in a parking lot near the UNI-Dome.

At 4:30 p.m. Friday, the Panther Marching Band will perform on Lawther Field. Other concerts will follow through Nov. 20, weather permitting, at other locations on campus.

“Our ensemble conductors wanted to work to find a way to bring live music to campus this fall while offering the extremely important music education experience of live performance to our students,” said Caroline Francis, music communications and operations coordinator.

“It’s a very different year for us. We’re used to having more than 100 events every semester, but it makes it doubly exciting for the fact that we’re still on campus, the fact that things have stayed safe and safety protocols are working, and students get to perform for audiences. It’s really cool for students to get to that point, both educationally and personally,” Francis said.

Live performance also builds morale and satisfies students at an emotional level, she explained. “Hearing applause in that final moment makes it a great part of the experience of playing music.”

The Wind Ensemble, Jazz Band One and Symphonic Band have been rehearsing in the Great Hall at the Gallagher Bluedorn Performing Arts Center, while Jazz Bands 2 and 3 rehearse in the smaller Davis Hall, also at the center. Smaller jazz combos have been practicing in the jazz studio in Russell Hall.

Accommodations have been made in performance spaces for COVID-19 protective protocols, including physical distancing and clear vinyl curtains to separate musicians.

Bengston Auditorium at Russell Hall has been used for string ensembles and solo instrumentalists.

Audience members should plan to bring their own chair or blanket. Socially distanced lawn markings have been added to the grassy field between West Gym and the Campanile. Audiences should face north to watch the Panther Marching Band and face west to watch all other concerts. Masks or face coverings are required for all attendees.

Musicians will be physically distanced from each other during the concerts and when appropriate or possible, wearing masks.

DES MOINES — Expecting a large volume of absentee ballots as many people avoid in-person voting during the pandemic, Iowa Secretary of State Paul Pate is seeking emergency authority from legislators to give election officials some lead time in preparing and processing those ballots before Election Day.

The Legislative Council is scheduled to hold a special meeting Friday to consider a request from Pate, in his capacity as the state elections commissioner, seeking to expedite the time-consuming process where election officials open mailed envelopes and separate the sealed ballots for counting starting Nov. 2 — the day before the general election, though the results are kept secret until after the polls close.

Pate outlined security procedures under which the Absentee & Special Voters Precinct Boards could meet Oct. 31 to open sealed affidavit ballots received by county auditors and remove the secrecy envelope containing the voted ballot — “but under no circumstances shall a secrecy ballot be opened before the board convenes to begin the tabulation of ballots” on Nov. 2.

Each political party may appoint up to five representatives to observe the Oct. 31 process and, if a ballot is not enclosed in a secrecy ballot or if the ballot is folded in such a way that makes the votes cast visible, a procedure is spelled out for two special precinct election officials — one from each political party — to place the ballot in a sealed envelope.

Pate’s request also would allow his office to authorize the emergency relocation of a polling place due to the coronavirus outbreak in compliance with Gov. Kim Reynolds’ public health disaster proclamation.

The Legislative Council is slated to consider Pate’s emergency election directive — the first time such emergency provisions have been requested before a statewide election — during a 2 p.m. conference call.

The Legislative Council is made up of state lawmakers who act as a steering committee when the full Iowa Legislature is not in session. 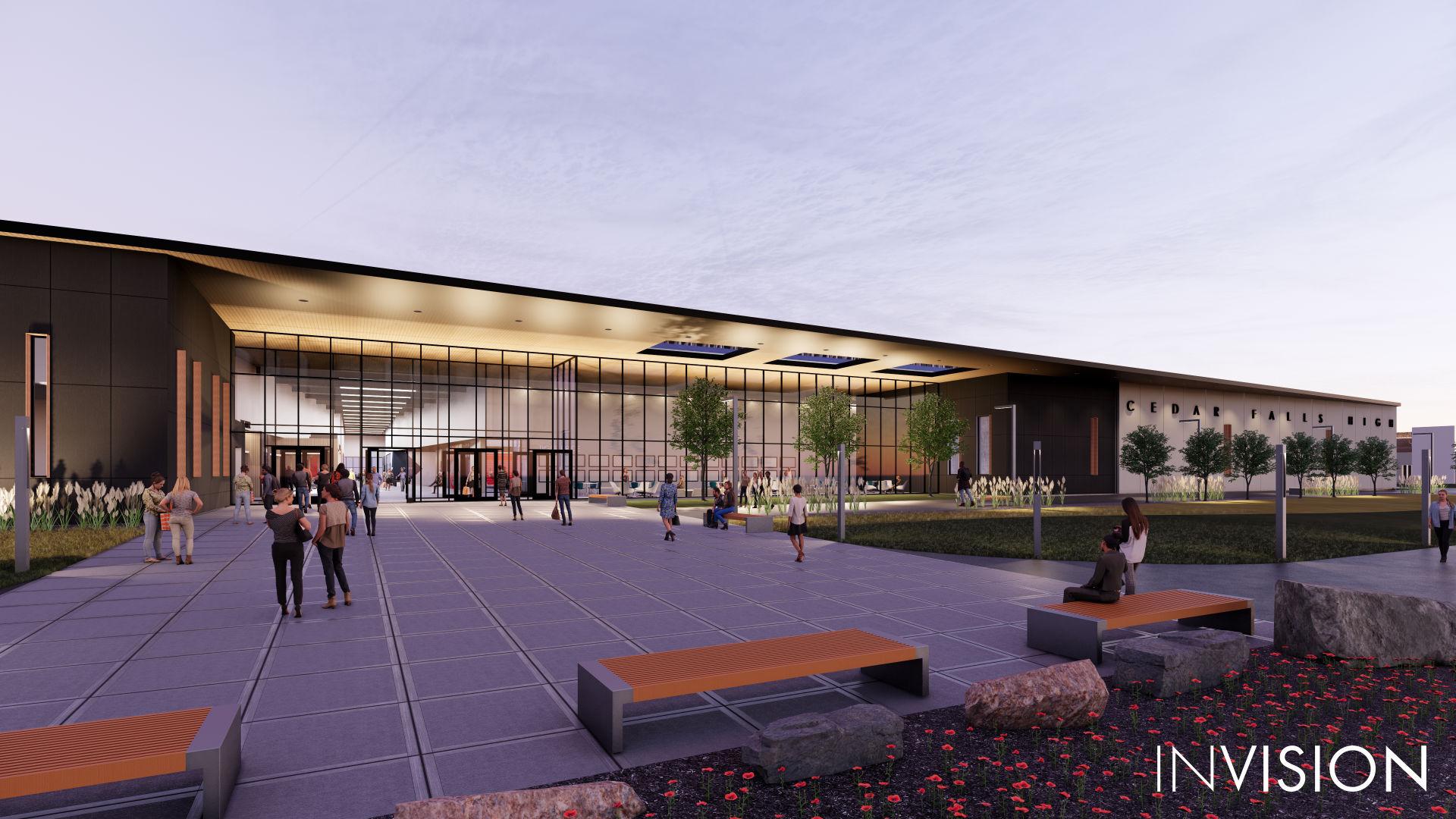 Police and protesters converge during a demonstration Wednesday in Louisville, Ky.

A woman reacts to news in the Breonna Taylor shooting Wednesday in Louisville, Ky. A grand jury has indicted one officer on criminal charges six months after Taylor was fatally shot by police in Kentucky. The jury presented its decision against fired officer Brett Hankison on Wednesday to a judge in Louisville, where the shooting took place.

Louisville police detain a man after a group marched Wednesday in Louisville, Ky. A grand jury has indicted one officer on criminal charges six months after Breonna Taylor was fatally shot by police in Kentucky. The jury presented its decision against fired officer Brett Hankison on Wednesday to a judge in Louisville, where the shooting took place.

A woman reacts to news in the Breonna Taylor shooting Wednesday in Louisville, Ky.

LOUISVILLE, Ky. (AP) — Hours after a Kentucky grand jury brought no charges against Louisville police for Breonna Taylor’s death and protesters took to the streets, authorities said two officers were shot and wounded Wednesday night during the demonstrations expressing anger over the killings of Black people at the hands of police.

Interim Louisville Police Chief Robert Schroeder said a suspect was in custody but did not offer details about whether that person was participating in the demonstrations. He says both officers are expected to recover, and one is undergoing surgery.

He says the officers were shot after investigating reports of gunfire at an intersection where there was a large crowd.

Several shots rang out as protesters in downtown Louisville tried to avoid police blockades, moving down an alleyway as officers lobbed pepper balls, according to an Associated Press journalist. People covered their ears, ran away and frantically looked for places to hide. Police with long guns swarmed the area, then officers in riot gear and military-style vehicles blocked off roadways.

The violence comes after prosecutors said two officers who fired their weapons at Taylor, a Black woman, were justified in using force to protect themselves after they faced gunfire from her boyfriend. The only charges were three counts of wanton endangerment against fired Officer Brett Hankison for shooting into a home next to Taylor’s with people inside.

The FBI is still investigating potential violations of federal law in connection with the raid at Taylor’s home on March 13.

Ben Crump, a lawyer for Taylor’s family, denounced the decision as “outrageous and offensive,” and protesters shouting, “No justice, no peace!” immediately marched through the streets.

Scuffles broke out between police and protesters, and some were arrested. Officers fired flash bangs and a few small fires burned in a square that’s been at the center of protests, but it had largely cleared out ahead of a nighttime curfew as demonstrators marched through other parts of downtown Louisville. Dozens of patrol cars blocked the city’s major thoroughfare and more police arrived after the officer was shot.

Taylor, an emergency medical worker, was shot multiple times by white officers who entered her home on a no-knock warrant during a narcotics investigation. State Attorney General Daniel Cameron, however, said the investigation showed the officers announced themselves before entering. The warrant used to search her home was connected to a suspect who did not live there, and no drugs were found inside.

Along with the killing of George Floyd in Minnesota, Taylor’s case became a major touchstone for nationwide protests that have drawn attention to entrenched racism and demanded police reform. Taylor’s image has been painted on streets, emblazoned on protest signs and silk-screened on T-shirts worn by celebrities. Several prominent African American celebrities joined those urging that the officers be charged.

The announcement drew sadness, frustration and anger that the grand jury did not go further. The wanton endangerment charges each carry a sentence of up to five years.

Gov. Andy Beshear, a Democrat, said he authorized a limited deployment of the National Guard. Beshear also urged Cameron, the state attorney general, to post online all the evidence that could be released without affecting the charges filed.

“Those that are currently feeling frustration, feeling hurt, they deserve to know more,” he said.

The case exposed the wide gulf between public opinion on justice for those who kill Black Americans and the laws under which those officers are charged, which regularly favor police and do not often result in steep criminal accusations.

At a news conference, Cameron spoke to that disconnect: “Criminal law is not meant to respond to every sorrow and grief.”

“But my heart breaks for the loss of Miss Taylor. ... My mother, if something was to happen to me, would find it very hard,” he added, choking up.

But Cameron, who is the state’s first Black attorney general, said the officers acted in self-defense after Taylor’s boyfriend fired at them. He added that Hankison and the two other officers who entered Taylor’s apartment announced themselves before entering — and so did not execute the warrant as “no knock,” according to the investigation. The city has since banned such warrants.

“According to Kentucky law, the use of force by (Officers Jonathan) Mattingly and (Myles) Cosgrove was justified to protect themselves,” he said. “This justification bars us from pursuing criminal charges in Miss Breonna Taylor’s death.”

Taylor’s boyfriend, Kenneth Walker, opened fire when police burst in, hitting Mattingly. Walker told police he heard knocking but didn’t know who was coming in and fired in self-defense.

Hankison was fired on June 23. A termination letter sent by interim Louisville Police Chief Robert Schroeder said he had violated procedures by showing “extreme indifference to the value of human life” when he “wantonly and blindly” fired his weapon.

Iowa Gov. Kim Reynolds sports a face mask with the Iowa flag Wednesday at the Statehouse in Des Moines.

Knights of Pythias Furgerson Lodge No. 5 allegedly remained open after Gov. Kim Reynolds’ Aug. 27 order closing bars to the general public. This allegedly happened on Sept. 9, according to the Iowa Alcoholic Beverages Division.

In all, the ABD filed hearing complaints on six businesses for violations of Governor Reynolds’ emergency public health disaster proclamation.

Cube Ultra Lounge in Council Bluffs —- Failing to ensure at least six feet of physical distance between each group or individual; and/or, failing to ensure that all patrons had a seat at a table or bar.

Xcaret Club and Lounge in West Des Moines: Failing to ensure at least six feet of physical distance between each group or individual; and/or, failing to ensure that all patrons had a seat at a table or bar.

Shotgun Betty’s in West Des Moines: Failing to ensure at least six feet of physical distance between each group or individual dining; and/or, failing to ensure that all patrons had a seat at a table or bar.

Court records show an employee at the Knights, Robert Earl Mosley, was cited for a misdemeanor public health violation during the Sept. 9 incident.

Police said they drove past the establishment and found 15 vehicles parked outside with music coming from inside shortly after midnight. The door was locked, and a person who eventually answered didn’t allow officers inside. Through the door, police counted eight people inside and one person with an alcoholic drink.

Mosley is asking for a jury trial. In a response filed with the court, he said members of the fraternity were inside were conducting a private meeting, and no drinks were being sold.

“If the law does not allow me to have private meetings at these times, please show me that section and I must comply,” Mosley wrote in his response.

In the Edo’s incident, police reports show that Waterloo officers assisted ABD officials at the establishment. They found no one inside eating and no food being prepared, according to the report.