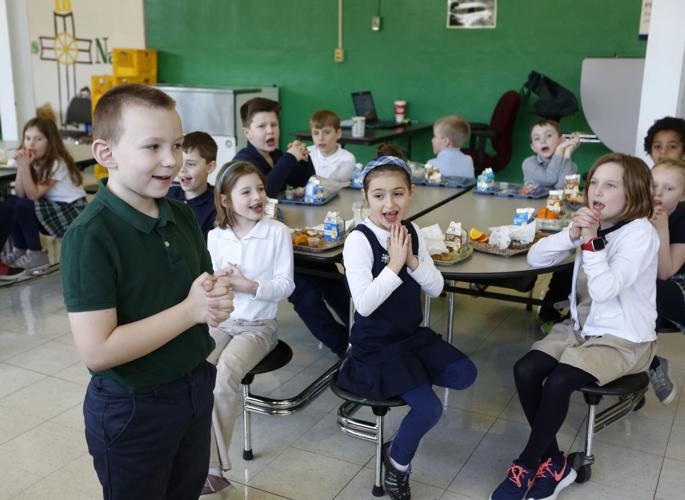 Second-grader Anders Stowe leads his classmates in an after lunch prayer at St. Patrick Catholic School. 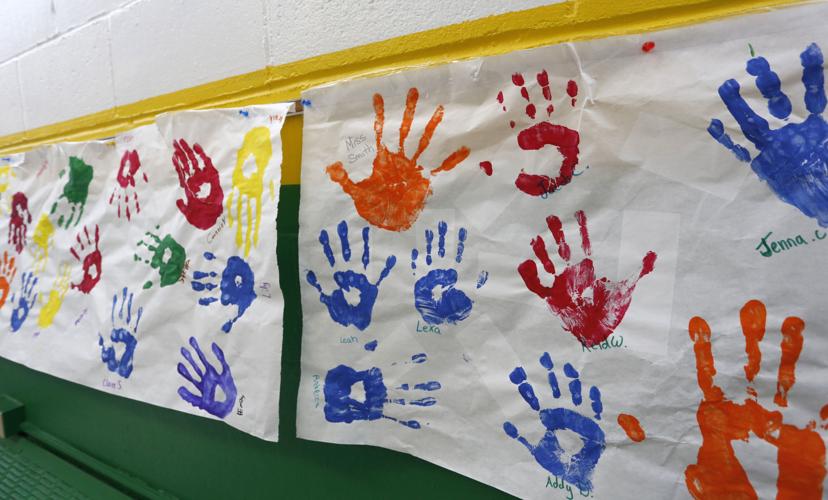 Older students helped the younger students make the posters that hang in the lunchroom at St. Patrick Catholic School. 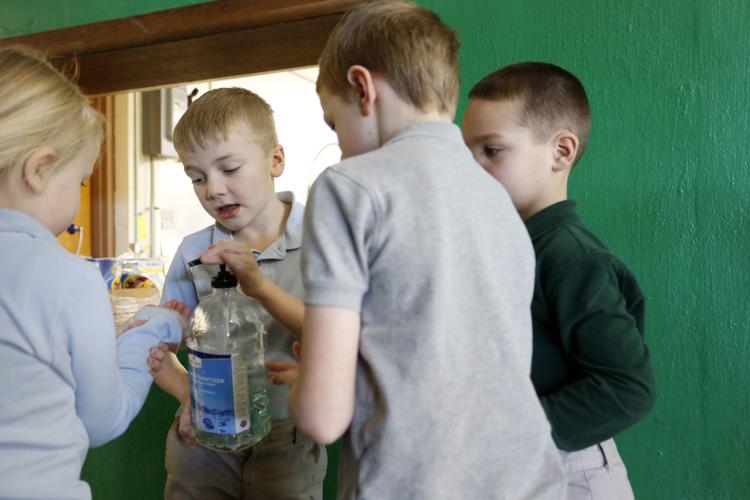 WATERLOO — Melissa Reade is passionate about creating leaders, and in her role as director of Leader Valley, that is exactly what she helps to do.

Under the auspices of the Greater Cedar Valley Alliance & Chamber, Leader Valley is a talent development initiative that “prepares pre-K-12 students for success by providing them with the essential soft skills needed for a life of effectiveness and competitive advantage in the workforce,” according to the Alliance’s website, cedarvalleyalliance.com.

Leader Valley’s priority is implementing the Leader in Me program in Cedar Valley Schools. North Cedar Elementary in Cedar Falls and Dr. Walter Cunningham School for Excellence in Waterloo were the first area schools to implement the program in 2010. To date, 23 Cedar Valley schools are on board.

Created by Utah-based FranklinCovey, Leader in Me introduces students and teachers to the principles of Stephen Covey’s “The 7 Habits of Highly Effective People” and helps to put them into practice.

“The big picture,” Reade said, “is we want to implement Leader in Me in all Cedar Valley schools. We are in schools in Waterloo, Cedar Falls and Cedar Valley Catholic schools. We want to expand to the greater Cedar Valley and into the rural schools. Next will be Waverly-Shell Rock and Janesville.”

An impact study done by the University of Northern Iowa on Leader in Me schools shows increased student confidence.

“The students and staff feel safer, more cared about, more respected,” she said. “There is less bullying and teasing.”

“Their role is changing as their capacity to see students as leaders changes. Their efforts are more student-centered and less teacher-directed. Students have input. Students have belief in the capacity of other students.

The local Leader in Me effort is unique for a few reasons.

“We are the only multi-district region in the world,” Reade said.

“We are the only two,” Reade said. “We are building it with them. We are on the front end of innovation.”

As Leader Valley director, Reade spends about half of her time in the schools.

“I see kids taking more risks, trying more things,” she said. “They have more pride in themselves, they feel ownership, they have pride in their school, they feel like they can contribute, like their voice matters.”

A $7 million capital campaign, Create Great, kicked off in 2016, with half of the funds earmarked for implementing Leader in Me in schools and the other half going to establish an endowment to ensure future funding for the program. So far, the effort has raised $2.3 million.

Tom Penaluna, chairman of CBE Companies Inc., past president of the Alliance and co-chair of the Create Great campaign, was the first to suggest implementing Leader in Me in Cedar Valley schools after seeing the impact it had on a district in Raleigh, N.C., the first to incorporate Covey’s seven habits into the classroom.

“When I was in business, one of the things that really concerned me was the job candidates we were getting were not prepared to go to work. Out of 100 applicants, there were only about 20 that we would consider offering a job. That means 80 percent of the job candidates we did not feel were adequate to receive a job offer or be a potential good employee.”

Penaluna said it was not just a local issue; people he talked to all over the state were having difficulty getting good job applicants.

“Prospective employees were technically prepared, but we weren’t seeing the soft skills, the employability skills. … I said ‘We need to figure something out.’”

Penaluna said Leader in Me is introduced in the elementary schools first, where it really has an impact.

“That is a time in a student’s life when they are starting to implant things that are going to carry them on for the rest of their life,” he said. “From ages 6 to 10 they are learning who they are going to be, basically, and it is so important to get the right skills at the younger ages.”

In referring to the UNI study, Penaluna said, “In almost every area they have seen improvements in Leader in Me schools as opposed to regular schools – in independence, risk taking and more. … It is absolutely true that a Leader in Me school is impacting students in a more positive way than a normal school.

Each school district handles Leader in Me implementation differently. In Cedar Falls, the individual schools decide if they want to be involved.

“There are some schools — and they are good schools — that don’t necessarily want to get involved in Leader in Me,” he said. “Someone once told me, ‘Good is the enemy of great.’ ‘Good’ holds those people back … and they could be a great school.

“This program serves every student, no matter race, religion, socio-economic level. It touches everyone and can have an impact and change lives no matter who they are.”

Penaluna said schools all over the state are showing interest in Leader in Me.

In the future, Penaluna said, he would like to see UNI get more involved, not just in monitoring the program’s progress but in enhancing the training of the teachers, principals and administrators.

“I think sometimes we just need to sit back and imagine what it will be like once we have all the schools up,” he said. “I think it will enhance the community as a whole. It will be very exciting to watch and see what happens. It is the possibilities that drive me.”

$7 million: Current campaign to bring Leader in Me to all Cedar Valley schools.

Save money by cutting costs from the top down

Save money by cutting costs from the top down

Second-grader Anders Stowe leads his classmates in an after lunch prayer at St. Patrick Catholic School.

Older students helped the younger students make the posters that hang in the lunchroom at St. Patrick Catholic School.