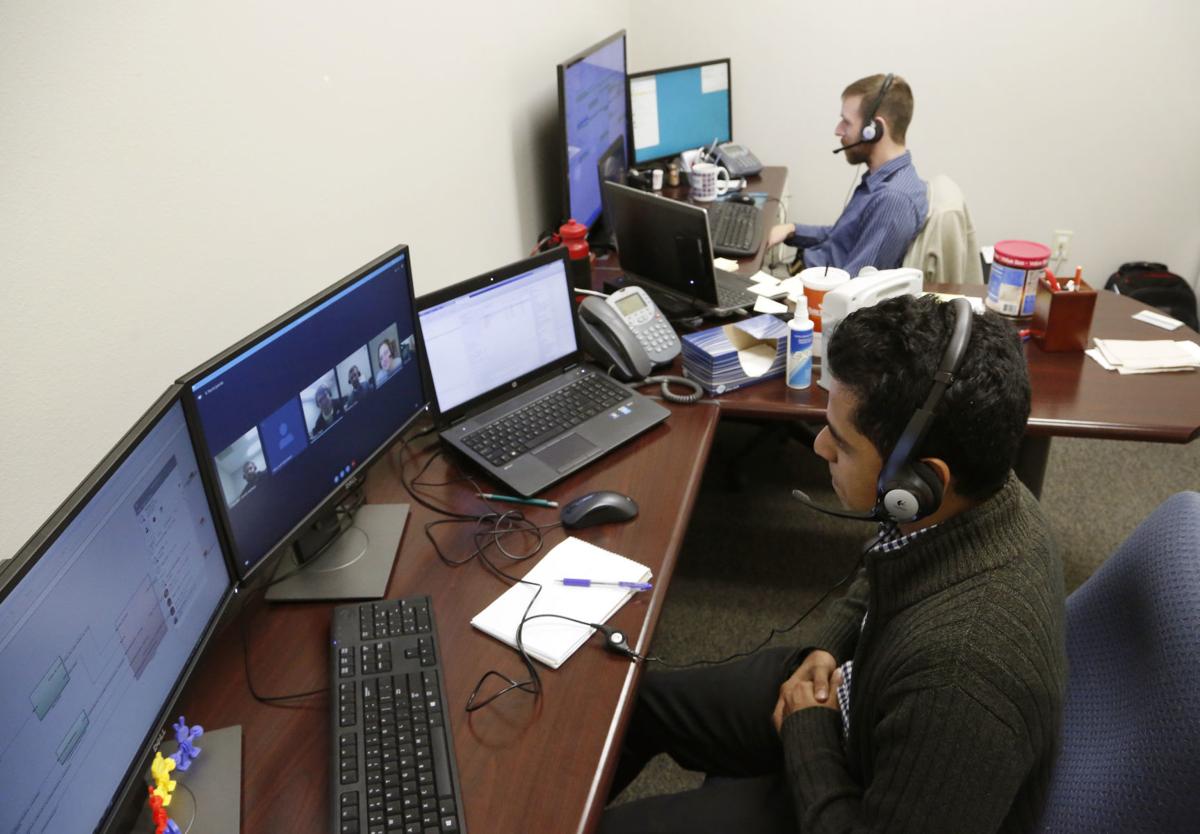 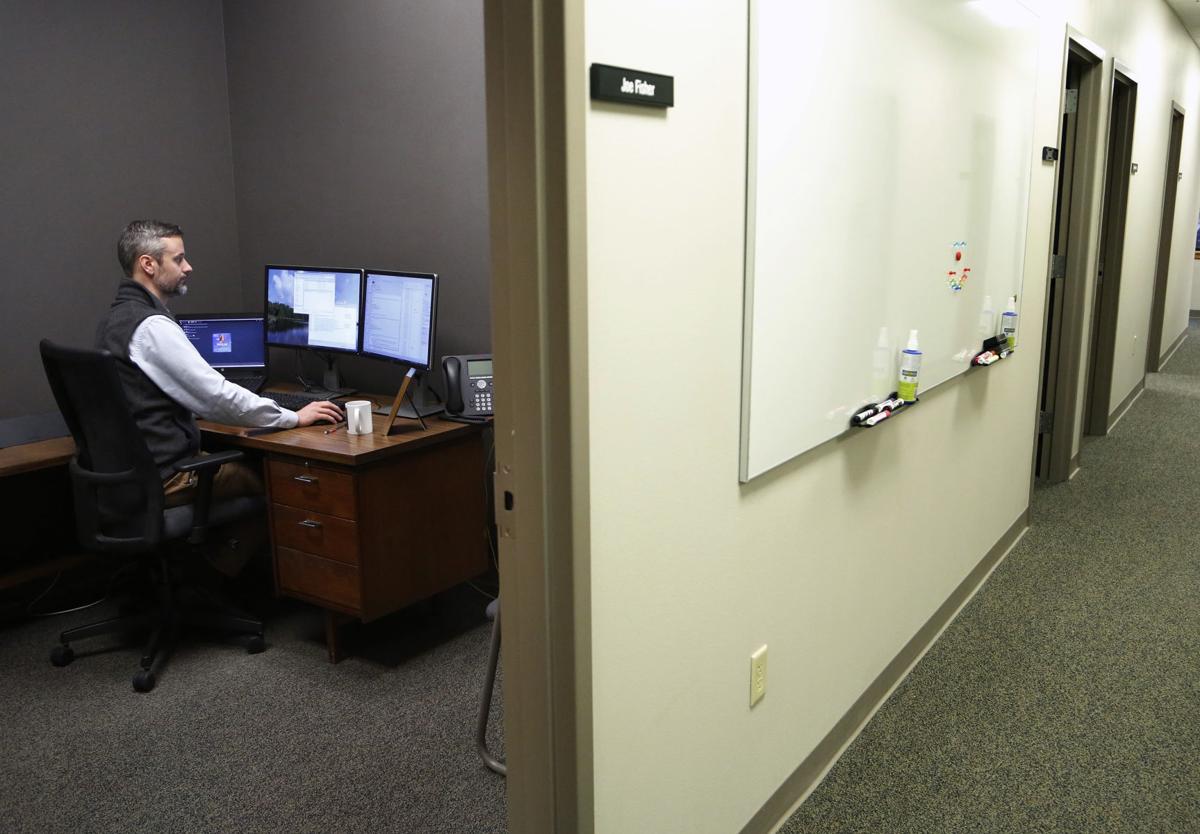 Software engineer Joe Fosher reviews software the team has worked on at the DISTek offices. 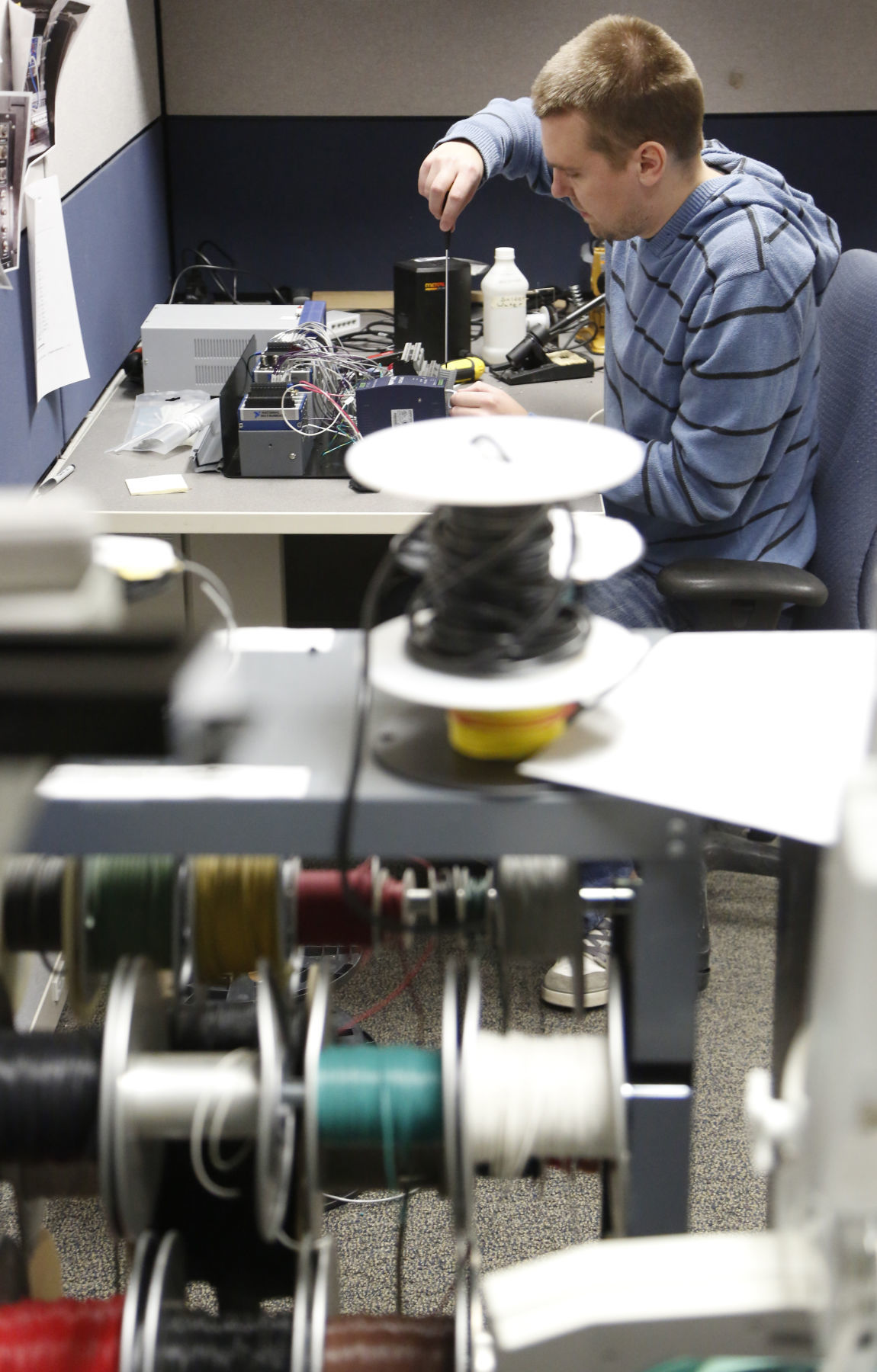 JIM OFFNER Special to The Courier

CEDAR FALLS — A quarter-century is over in a flash.That seems to be the sentiment around DISTek Integration Inc., which turns 25 this year.

The Carthage, Ill.-based company relocated to Cedar Falls in 1998, expanded a few years later and purchased its present location on 6612 Chancellor Drive in 2005.

Jeremy Yoder, the DISTek’s chief operating officer, was one of the first employees hired at the Cedar Falls location. Yoder said the company always has been about growth, and recent developments spell that out.

“We certainly want to continue to grow,” he said. “We’ve been making recent investments over the past several years of having employees – we added 17 employees last year. We want to add more going forward.”

More than 60 of DISTek’s 107 employees work in Cedar Falls, which is the company’s chief operation base, Yoder said.

“In 2011, we opened an office in Fargo, N.D., and in 2015 we opened offices in Milwaukee and Des Moines,” he said. “We opened some strategic new locations near our customer base. Iowa is a great for ag, but also Milwaukee and Fargo are strategic areas where both ends are stationed and doing business.

“Now, we want to grow our employees and service offerings in those different areas.”

DISTek also has been working to expand its business model, Yoder said.

“Historically, we’ve been primarily a services-based company,” he said. “A customer says they need software for this controller on that implement, and we come in and provide expertise to design, develop and test it; now, we’re starting to create our own products to license and sell to our customers. We’ll remain primarily a services company, but we want to continue to invest and grow the number of products we offer.”

Bob Thiesen, vice president of infrastructure, has been with DISTek for 10 of its 25 years.

He said he moved to the Cedar Valley from Minnesota to take the job.

“When I did, one of the things that struck me when I was looking to move was a company that had a similar set of value systems that I have,” Thiesen said. “When I came here, it was very apparent from the onset that it matched up very well.”

DISTek’s modus operandi – it’s way of doing business – always has been focused on its “purpose, value and future,” Thiesen said.

Employees are central to “The DISTek Way,” he said.

Indeed, he noted, employees now have an ownership stake in the company, having formally launched an employee stock ownership plan at the end of 2014.

“Bob talked about our values, and I think that’s instrumental,” Yoder said. “We’re picky on who we hire. We want to hire people who are very strong technically but are a match for our DISTek way and culture.”

DISTek does keep its eyes out on potential recruits, and its workers help, Thiesen said.

“One thing we do is have a reward program in place for employee referrals,” he said. “We like to take employees that are alumni from the schools we’ve recruited before. We take them with us so they can speak at job fairs at those schools directly to potential candidates and share their experience at DISTek.”

The company also is selective about its clientele, Thiesen noted.

Indeed, DISTek has zeroed in on a niche area for software applications, Yoder said.

“We just focused on the off-highway industry – vehicle and equipment manufacturers that make ag equipment, tractors, combines, construction equipment like loaders and graders, forestry, miners,” he said. “We’ve developed a really solid reputation; if you need high-tech software and you’re in the off-road industry, DISTek is a great place to go.”

DISTek’s locations now are spread out across the Midwest, but operations are cohesive, Yoder said.

“We have a team that has members in Fargo, Des Moines and Milwaukee, as well as Cedar Falls, all working on similar projects,” he said. “We have a process of daily meetings (via) video conferencing. We can do face-to-face meetings, making sure we have enough bandwidth, making sure we have the right tech tools in front of our employees.”

Having numerous locations has its advantages, Thiesen said.

“If we can deliver the product or service, it doesn’t matter where we’re at,” he said. “A lot of services, software development doesn’t have to be done on-site. That affords us great flexibility and allows us to put offices not only where there are potential clients, but also in locations where we can tap the employee base.”

DISTek looks forward to even more success in the years ahead, although there always are challenges, Yoder noted.

“We’re focusing on industry that’s feeding, building and powering the world and so those are all areas where there is increasing need for technology,” he said. “We feel bullish or optimistic about the industry we’re in.”

Software engineer Joe Fosher reviews software the team has worked on at the DISTek offices.