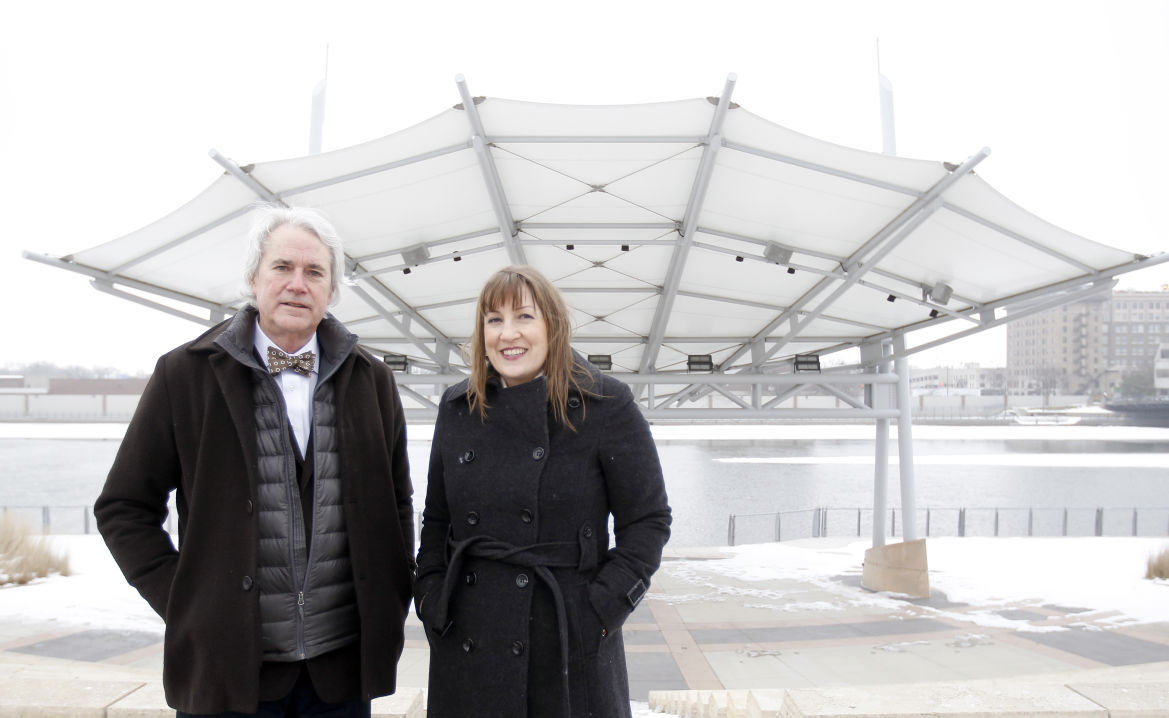 Brian Vandewalle, left, and Marta Purdy, right, stand at the RiverLoop Amphitheater on Jan. 25 in Waterloo. 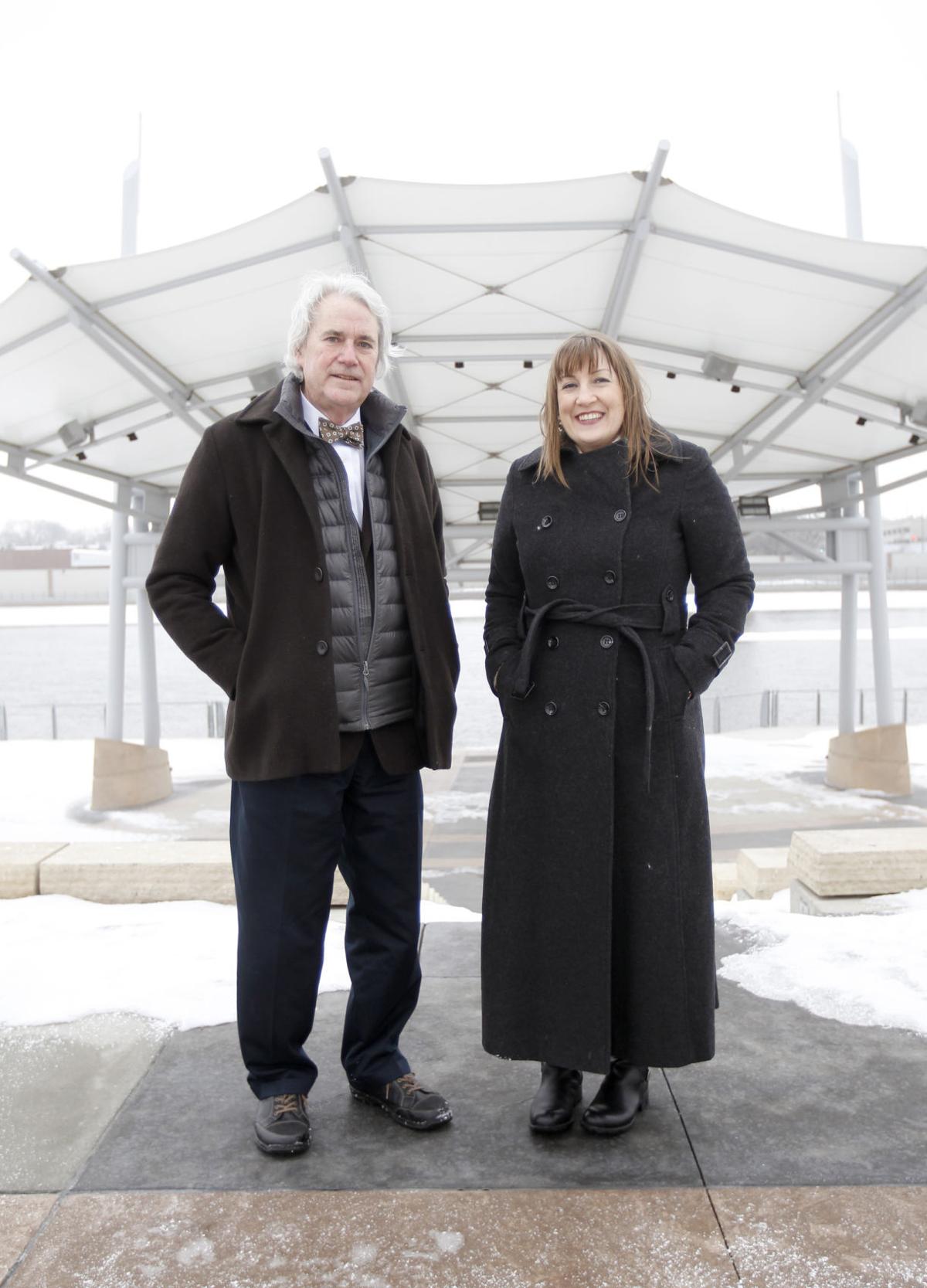 Brian Vandewalle, left, and Marta Purdy, right, photographed at the RiverLoop Amphitheater on Jan. 25, 2016, in Waterloo.

But the man whose urban planning firm would eventually design a colossal downtown makeover remembers a patchwork of industrial buildings and blight once visible from the elevated section of U.S. Highway 218.

“I was taken aback,” Vandewalle said. “The shocking thing was you had such a beautiful river, a beautiful Main Street and nice facilities, but no one could see it. It was like driving through the bowels of the city instead of the front door.”

The view is dramatically different today with the Cedar Valley SportsPlex, a RiverLoop Expo Plaza providing an open view of the Waterloo Public Library and iconic amphitheater, and far fewer vacant buildings.

Vandewalle and Associates, based in Madison, Wis., created the original conceptual plan for Waterloo’s downtown riverfront renaissance in 2000 and has been providing consulting services as the city and Waterloo Development Corp. continue to implement its features.

“They’ve brought a consistent focus that’s necessary when you look at the type of projects that needed to be done and the time it takes to do them,” said WDC president Dan Watters.

Waterloo has had four mayors and eight city councils since the original downtown plan was developed. Turnover has also occurred on the WDC, a nonprofit group of local business leaders created to work in partnership with the city on downtown development.

“You have to keep everybody moving in the same direction,” Watters said. “The expertise (Vandewalle) brings to the table and the ability to maintain that focus from one administration to the next has been invaluable.”

Vandewalle’s firm, which employs 25 people in a variety of disciplines such as real estate, economic impact, grant writing, design, architecture and communications, was invited to the Waterloo project through its connection with Deere and Co.

Vandewalle was hired three decades ago in Moline, Ill., where a similar public-private partnership known as Renew Moline was developed to revitalize the downtown riverfront where Deere’s factories were located.

“Deere saw what we were able to do,” Vandewalle said. “We’re sort of the conductor of how you rebuild and how you create markets where markets don’t exist.”

Vandewalle’s first downtown master plan, unveiled in October 2000, was designed to take advantage of the Cedar River and bring a downtown “cool factor” to attract the new workforce employers, including Deere, were having trouble recruiting.

“We need to attract the top talent to the businesses,” Vandewalle said. “If you don’t have the amenities these young people in particular aren’t going to come, and the baby boomers are going to move to Arizona.”

The original focus of the plan was to eliminate the inappropriate land uses and blight in the area between U.S. 218 and the river. A Vision Iowa grant, landfill money and revenue from the new Isle Casino Hotel Waterloo helped erect the major public projects and riverfront trails.

“We went through a recession during this time,” Vandewalle said. “To try to do financing of these things in an urban setting was difficult.”

“They seem to be more interested about doing something downtown than maybe they were about five years ago,” Purdy said of potential investors. “The hard work and all of these people working behind the scenes together to accomplish the same goals is the real key.”

Vandewalle said the Single Speed project will be catalytic.

“The brewery is really cool from a use point of view,” he said. “It’s going to change a lot of the young people’s view of Waterloo. It’s going to put bikes on our streets and on our bikeways.”

A number of projects from the original master plan and many added along the way still need to be completed, including a marina, white-water course, a possible competition pool at the SportsPlex and another sheet of ice at Young Arena.

But Vandewalle said a prime focus now is building another 500 to 600 new housing units downtown, which will appeal to a broad range of tenants — entrepreneurs, young professionals, retiring boomers — wanting to enjoy a downtown lifestyle.

“What you’ve got is a whole lot of momentum right now,” he said. “The biggest thing you’ve got to fear is if you don’t continue to do things high quality.”

WATERLOO — A firm overseeing a resurgence in downtown Waterloo will stay on board for at least another year.

WATERLOO — The city has renewed two downtown revitalization contracts for another year.

WATERLOO — The city is keeping a downtown redevelopment consultant for another year.

Brian Vandewalle, left, and Marta Purdy, right, stand at the RiverLoop Amphitheater on Jan. 25 in Waterloo.

Brian Vandewalle, left, and Marta Purdy, right, photographed at the RiverLoop Amphitheater on Jan. 25, 2016, in Waterloo.