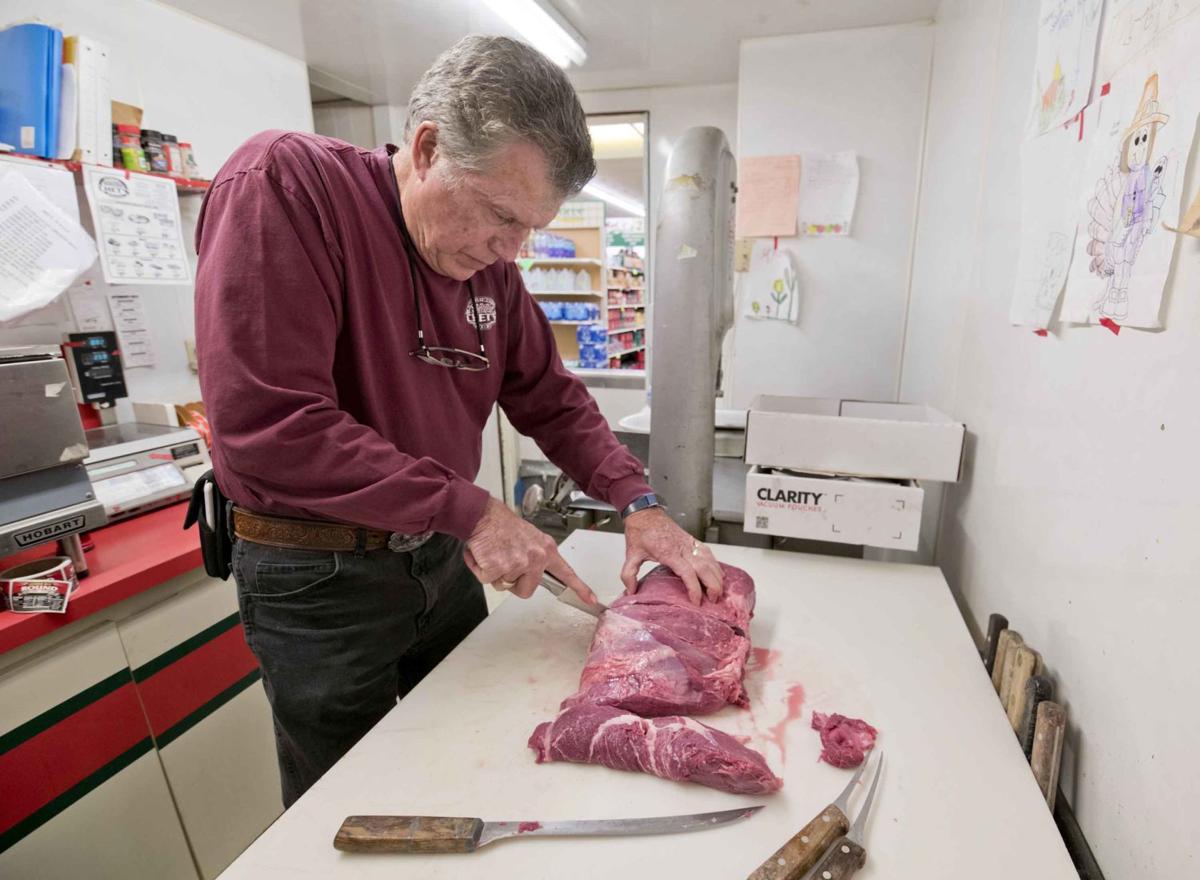 Chet Davis slices sirloin tip steaks as he prepares them for packaging at his grocery store, Chet's Foods, in Kingsley on Feb. 28. 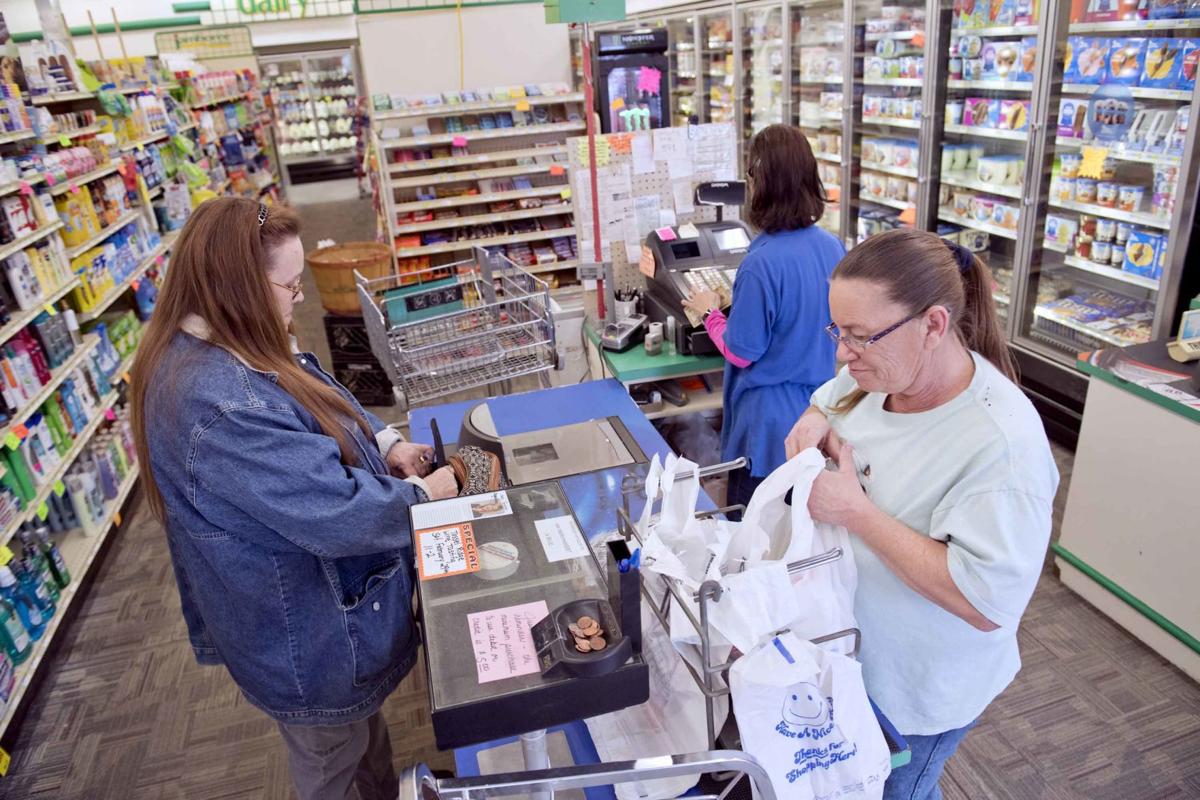 KINGSLEY (AP) — Fifty years ago, the Plymouth County town of Kingsley had three grocery stores downtown, all within one block, with two facing each other at the corner of Main and Second streets.

That total slipped to two stores by the 1970s, and then, about 25 years ago, a single store, Chet’s Foods, owned by Chet and Linda Davis.

Now, a new Dollar General store opened several weeks ago in Kingsley, creating new competition for Chet’s Foods. The Davises are hoping what happened two years ago to their other grocery store in nearby Moville won’t be repeated.

“Hopefully, (people) realize how important the grocery store is to their community,” Chet Davis told the Sioux City Journal.

In 2010, Chet’s expanded into Moville, Linda Davis’ hometown, at the urging of residents there who had lost their previous grocery store to a fire.

But after Dollar General came to Moville in summer 2016, Chet’s revenues quickly took a hit. The losses were especially acute for items such as canned goods and household products, so the Davis family closed the Moville store.

Linda Davis said her take on the closure of the Moville store is “not bitterness, more like disappointment,” but admits the future of the Kingsley store is murky. Chet Davis worries that if local residents shop heavily at Dollar General, it could not only negatively hit the grocery store, but also two other businesses that lie one block west downtown.

“They are going to hurt the pharmacy and the hardware store,” Chet Davis said.

Dollar General, which prices roughly 80 percent of its items below $5, is rapidly sprouting into rural areas that most other national retail chains have traditionally shunned. In recent years, Dollar General has opened stores in numerous area cities with populations of 1,000 and up. There are now more than 110 Dollar General stores within a 100-mile radius of Sioux City.

The Dollar General in Kingsley was built at 410 E. First St., on the far southeast edge of town, about a half mile from Chet’s. Dollar General’s grand opening was on Feb. 29, when special deals included $10 Dollar General gift cards to the first 50 adult shoppers, plus 200 tote bags with free product samples.

“Dollar General is committed to delivering a pleasant shopping experience that includes a convenient location, a wide assortment of merchandise and great prices on quality products,” Dan Nieser, Dollar General’s senior vice president of real estate and store development, said in a release. “We hope our area customers will enjoy shopping at Dollar General’s new location.”

Dollar General stores typically employ approximately six to 10 people, depending on the need, Nieser said. On Tuesday, the “Now Hiring!” sign was hanging in a window near the entrance to the Kingsley store, while another yellow sign showed movie theater size candy was selling for $1.

David Swenson, an economist at Iowa State University, said the struggles of small grocers can’t be laid solely at the feet of Dollar General.

“The reason the grocery stores are closing is not just Dollar General, it’s because the density of local demand purchases has either gone down because of population going down, or that peoples’ purchasing preferences have shifted, so they’re doing more of their shopping where they work (in larger towns),” Swenson said.

Over the half hour the Davises spoke near 11 a.m. on Tuesday, about 10 customers went through buying items. One young man bought bread and frozen waffles, while just behind him an elderly man had a fairly full shopping cart.

One of the Chet’s shoppers was David Hagan, of Kingsley. Hagan noted how some people in the town of 1,411 had tried to fight off Dollar General from opening, pushing the City Council to deny permits, with one step being presenting a petition with more than 800 signatures. Ultimately, the city attorney said the company’s plans could not be stopped, as the corporation pursued a business plan that involved buying land in a properly zoned area.

Hagan, who signed the petition against Dollar General, said “I don’t see why the city let Dollar General in, especially after what happened in Moville.”

Hagan has been a longtime patron at Chet’s, which has been in business for more than four decades. Recently, with some mobility issues, Hagan has been grateful for the home delivery of purchases from Chet’s, something he uses once or twice a week, particularly in the winter.

“What scares me the most about Dollar General is losing Chet’s. If Chet’s closes, I’m probably going to move to Sioux City,” Hagan said. “If we lose Chet’s, we could lose others. It will kill the downtown.”

A few minutes after Hagan exited with his Chet’s purchases, there were four vehicles outside the Dollar General, plus a big Coca-Cola delivery truck. Heidi Brands, of Le Mars, which is 25 miles away, parked and headed in, saying she was aware the Kingsley store had just opened.

Brands said she has a division for how she spends in stores, buying her household items such as cleaning materials at Dollar Generals (“They usually have good coupons for those”) and food at grocery stores.

Brands summed up the merits of shopping at Dollar General.

“They do have good options if you are on a budget...It doesn’t have everything I need. This version, it doesn’t have the produce my family needs,” she said.

Linda Davis noted how people are becoming aware of the scourge of “food deserts,” in Midwest small towns that have no grocery stores selling fresh food such as fruit, vegetables or meat.

She said Chet’s, which opened in 1978 after buying out another 40-year-tenured merchant, Cole’s Market, in the same location, has long sought to provide what people want in the store, and will special order requested items when possible.

Chet Davis is watching Dollar General as he assesses the future. He admitted the corporation has a big advantage in buying in bulk to drive down costs.

Chet Davis said business has dipped about 10 percent in the few weeks that Dollar General has been open, which was less of a sting than the 30 percent dip that took place in Moville.

“They hurt us a lot more in Moville than here...It is gonna adjust. We hope it comes back — think positive,” he said.

Nonetheless, the Davises are considering selling as they move deeper into their 70’s. One of their daughters, Shannon Phelan, who works at the store, isn’t looking to run it for another generation. The Davises said a few good nibbles of store purchasers are out there, although nothing is imminent.

“Our number one thing is to keep the store rolling for the community. That is what we are working for,” Chet Davis said. “We will still live here. We need a grocery store too.”

One might not think a business which functions outdoors would have its day-to-day business affected by coronavirus concerns.

Waffle Stop is set to open Monday for breakfast after temporarily closing due to the coronavirus pandemic. The owner used the break to remodel the Cedar Falls diner's interior.

Iowa dentists face costly new rules before they can reopen

As Iowa’s dental offices began resuming elective procedures this week, dentists and their staff must meet a specific set of guidelines before they can see more patients.

Deere & Co. reported net income of $665.8 million for the second quarter ended May 3.

Federal recommendations meant to keep meatpacking workers safe as they return to plants that were shuttered by the coronavirus have little enforcement muscle behind them, fueling anxiety that working conditions could put employees' lives at risk.

Chet Davis slices sirloin tip steaks as he prepares them for packaging at his grocery store, Chet's Foods, in Kingsley on Feb. 28.