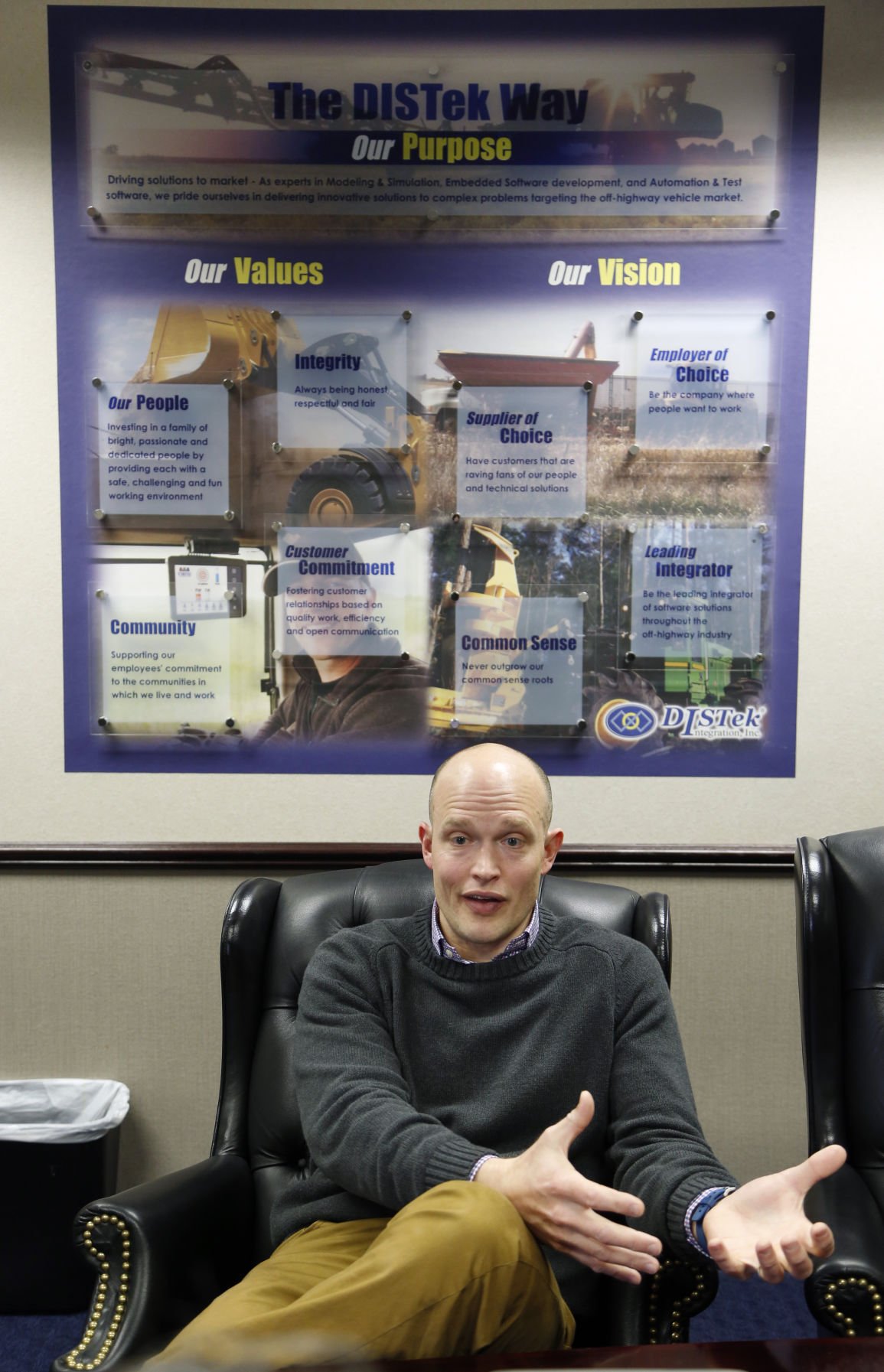 Jeremy Yoder, executive vice president at DISTek Integration, talks about the changes in the Cedar Fals company in the last 25 years. 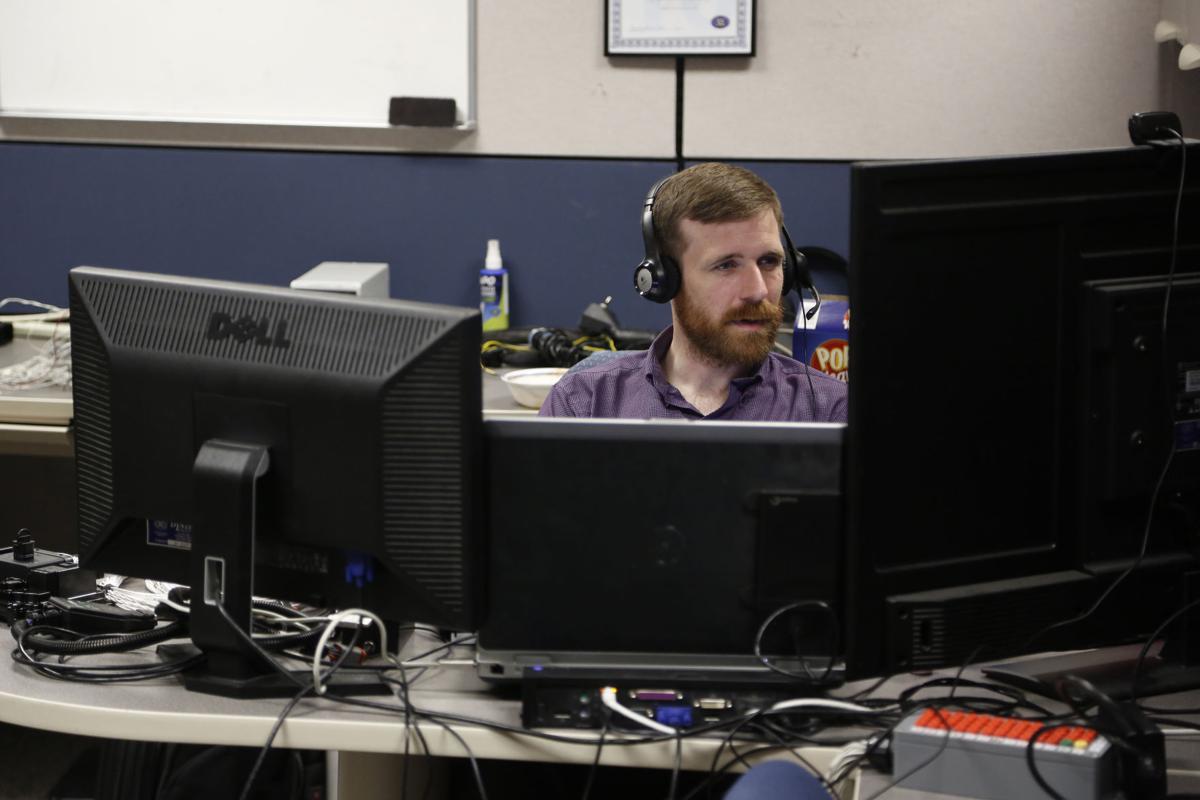 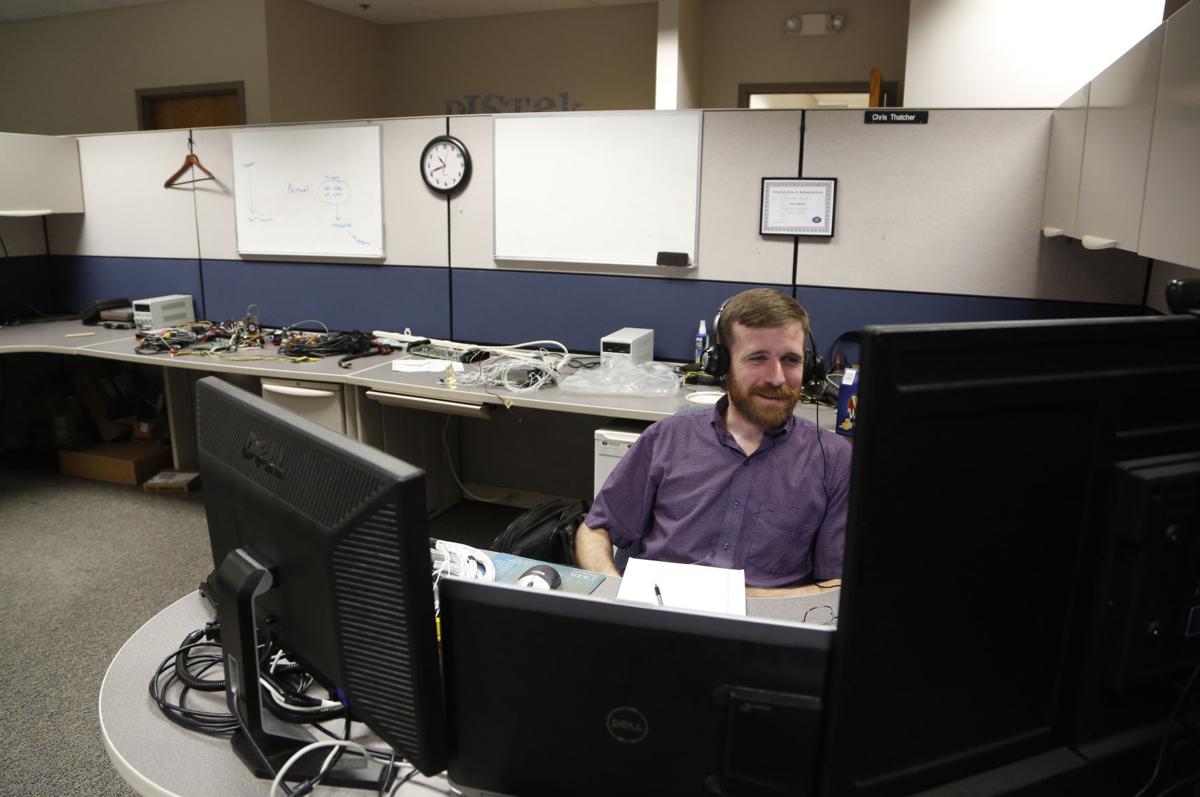 DISTek Integration Inc., based in Carthage, Ill., but with its chief operation base in the Cedar Falls Industrial Park, was founded in 1998 by Matt Dickinson, a former employee of the John Deere Product Engineering Center in Cedar Falls. The company located to Cedar Falls in 1998, expanded a few years later and purchased its present location on 6612 Chancellor Drive in 2005.

“I was hired in 1998. I think I was employee No. 5,” said Jeremy Yoder, the company’s chief operating officer, who attended the University of Northern Iowa. The company employs about 100 people, roughly 60 to 65 of whom are in the Cedar Valley, either at the Cedar Falls office or customer locations.

“If you see a large off-highway vehicle — tractor, combine, crawler — in a field or on a construction site, there is a good chance that DISTek software is running under the hood,” Yoder said. “That’s our focus, those giant off-highway machines, that software that’s on the machine controlling it — transmission controls, steering controls, anything that involves the hydraulics or the guidance.

“The DISTek logo isn’t out there on the machine, but we’re kind of under the hood, kind of the DNA of the machine,” Yoder said.

“We’ve really focused on diversification over the past seven years. That’s a continued focus for us,” he said. “We’re in a much healthier spot. I would say we probably have over 25 different off-highway customers. We feel good about that but we want to continue to focus on that.”

Dickinson started DISTek after he moved back to Carthage Ill., to his family farm. “He started some engineering consulting and really started his own business from that. Had more to do than he could handle. It’s kind of grown from there.”

Dickinson also started an employee stock ownership program. “Matt is selling DISTek to its employees,” Yoder said. “We are currently 30 percent employee owned with plans to be 100 percent employee owned down the road,” as Dickinson phases into retirement over several years. “Over time as you accumulate years of service, based on your salary, you acquire shares. When you retire, you can get paid out of that.

“We’re trying to embrace that employee-ownership culture,” Yoder said. “It’s like when you rent a house versus owning it. You probably go a little extra mile on giving it TLC and taking care of things. We’re finding our employees doing the same thing now that they’re owners — looking for ways to make us more successful.” The firm is a perennial Courier Employer of Choice award recipient.

The company likes its geographic location as well as its position in the market. In addition to Cedar Falls, the company has offices in Des Moines, Fargo, N.D., Milwaukee and a sales office in Dubuque.

“We see ourselves continuing to grow,” Yoder said. “As part of our strategic plan, over the next several years we’d like to grow to 150 employees,” with proportionate growth in the Cedar Valley, and there’s physical room for growth. “We’re happy with the Industrial Park here. It’s really been a great location for us.”

“We hire a lot of engineers from Iowa State, Iowa, here at UNI — our computer science majors,” as well as University of Wisconsin at Platteville. “We love our Midwest presence because there’s a lot of great schools in the area. Our success is based on our employees.”

Many in the company have their roots in the soil, said Yoder, who grew up on a farm in Johnson County near Kalona. And they’re cultivating a future workforce through their volunteer efforts in coaching and judging school robotics leagues.

“A lot of our employees grew up on farms or on the Midwest, so it’s a good fit,” Yoder said. “Growing up on an Iowa farm, it’s super cool to be working on the technology that’s helping feed the world and build the infrastructure and power the country. It’s a pretty rewarding job.”

Jeremy Yoder, executive vice president at DISTek Integration, talks about the changes in the Cedar Fals company in the last 25 years.