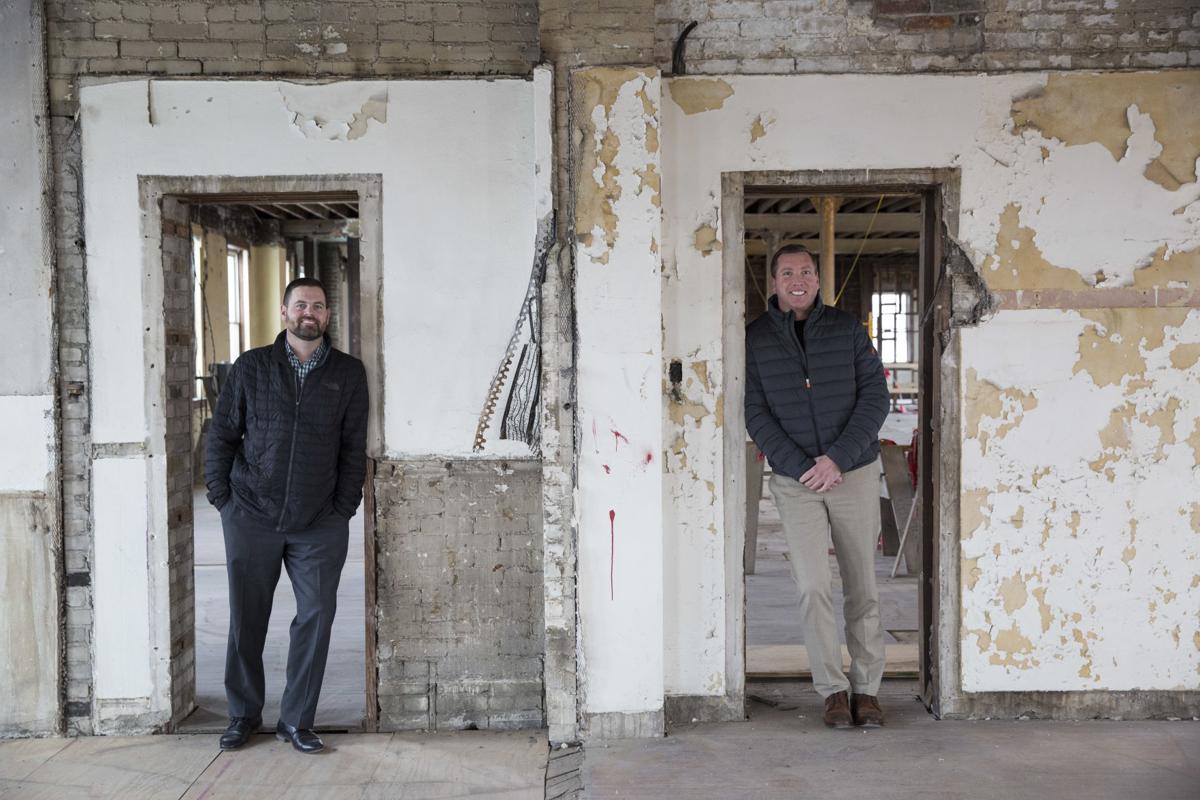 Developers Kade Hoppenworth and Dan Cooley stand in the building they are renovating at 300 Commercial Street in Waterloo on Tuesday afternoon. 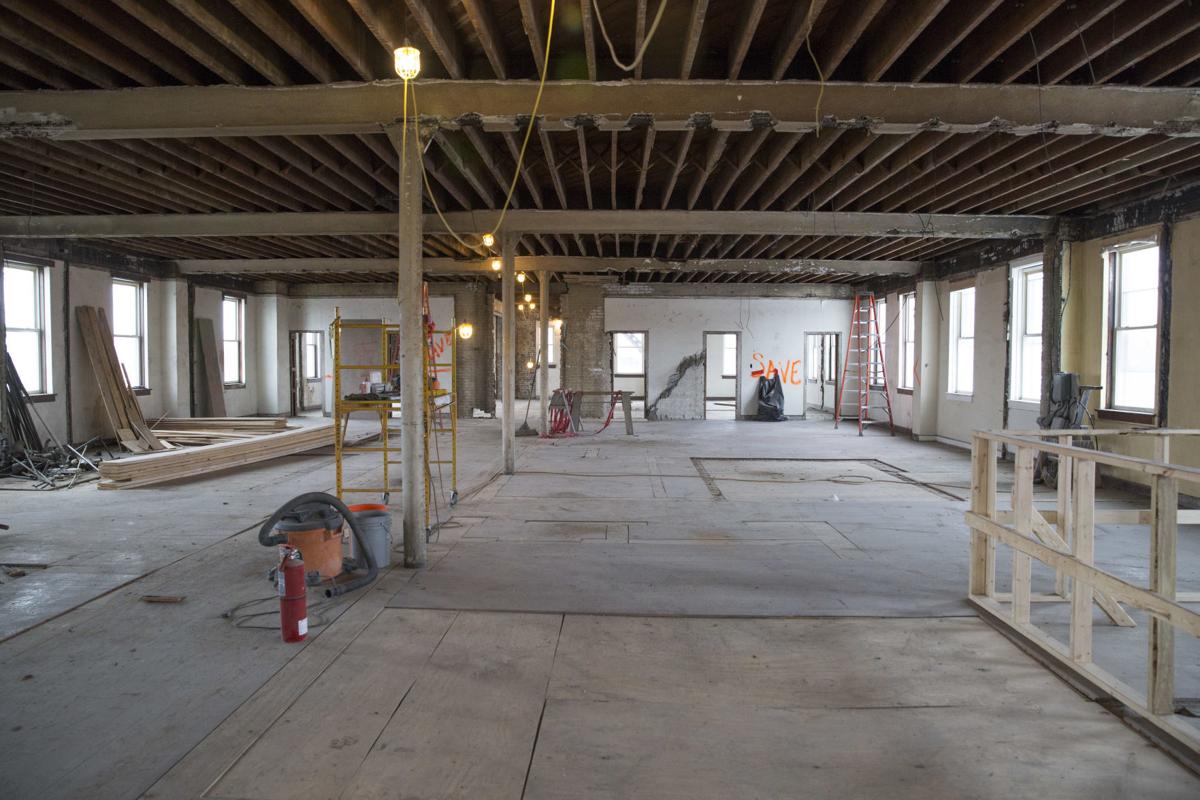 The second flood being renovated at 300 Commercial Street in Waterloo on Tuesday afternoon. 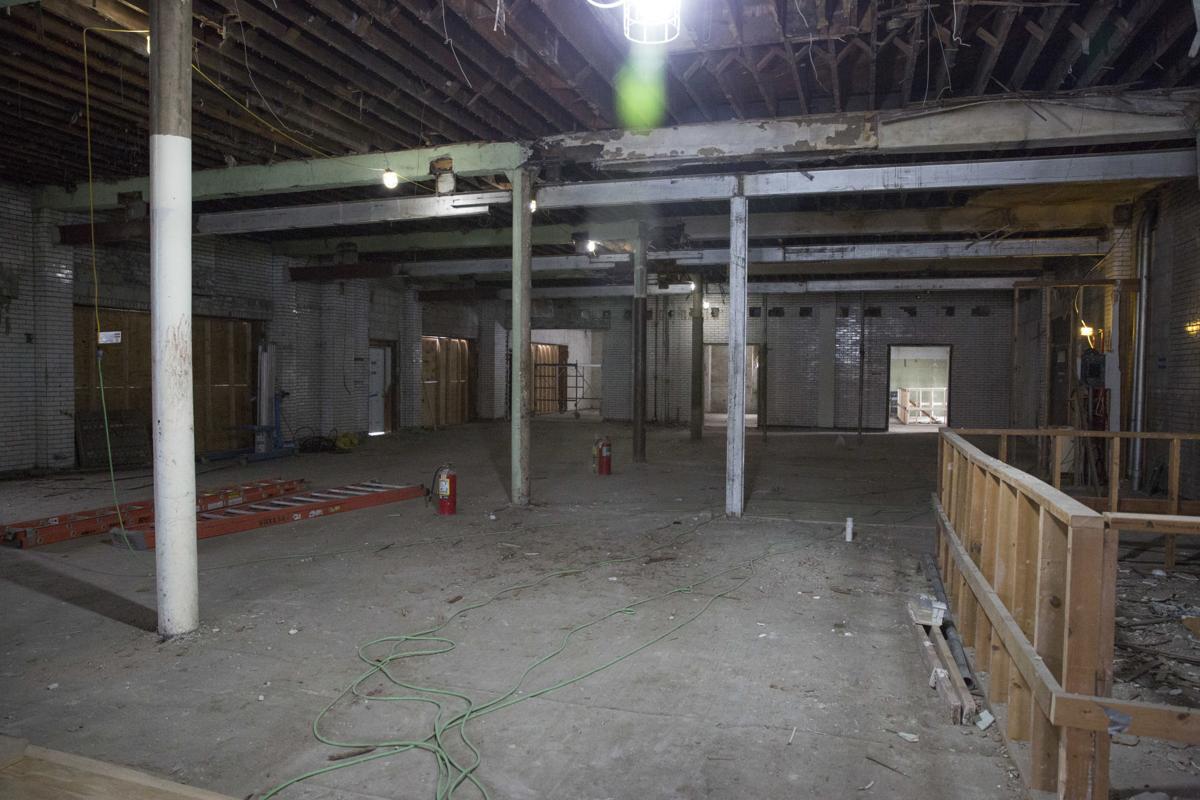 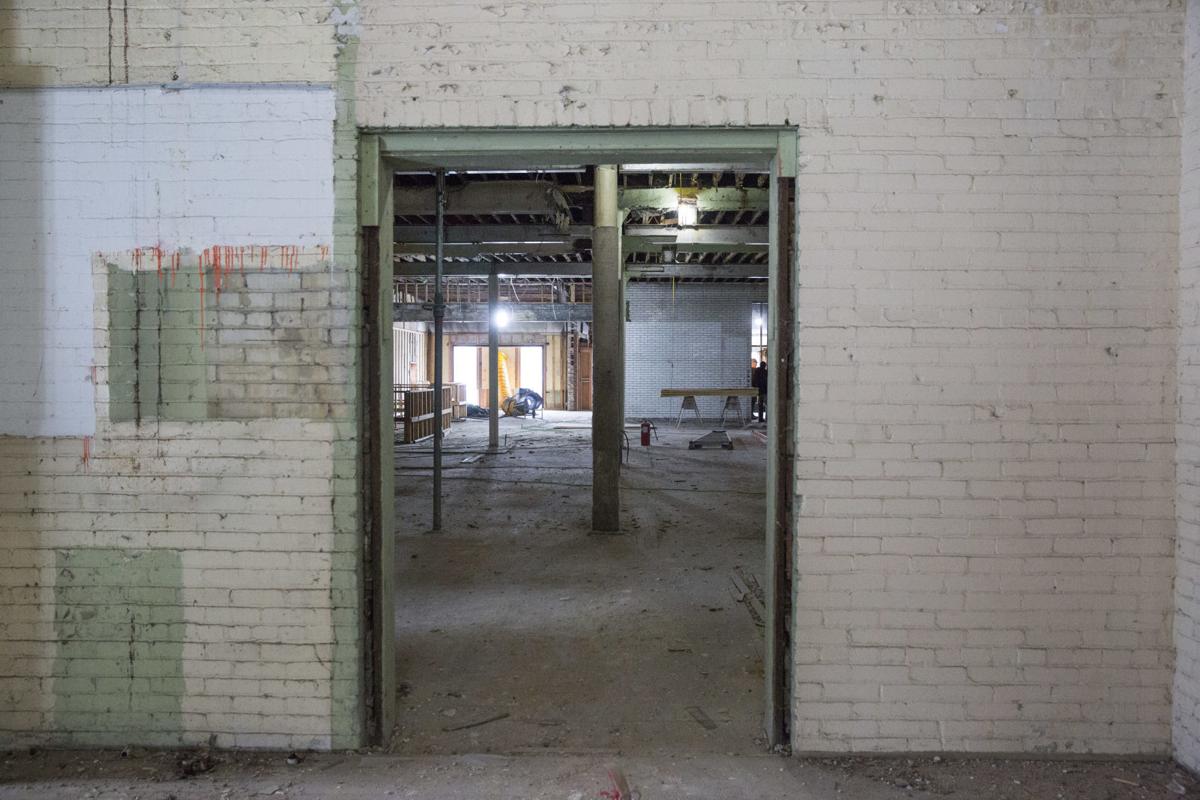 This rendering from Levi Architecture shows how the original Friedl bakery on the corner of Commercial and West Second streets in downtown Waterloo will look when it is restored.

WATERLOO -- A pair of local investors are breathing new life into the heart of Waterloo's flourishing downtown entertainment district.

Kade Hoppenworth and Dan Cooley are renovating a building at 300 Commercial St., which was built nearly 110 years ago to house one of the city's first production bakeries before being carved up over the decades into a mishmash of businesses and low-rent apartments.

The $3.5 million project slated for completion in August is creating street-level space for businesses and a dozen upscale residential units on the upper two floors.

"What really motivated us for this location was the redevelopment of the area and the riverfront," Hoppenworth said. "We really liked the core hub of this area … and we really want to complement everything around us."

The building sits directly across Commercial Street from SingleSpeed Brewing Co. and the Waterloo Center for the Arts. The Cedar Valley SportsPlex is around the corner, while Young Arena, RiverLoop Amphitheater and library are just a block away.

Cooley said restaurant, bar, retail or office tenants are being sought for the main floor, which is about 5,700 square feet but could be set up as three separate storefronts.

"We've had about 20 different businesses that have walked through already, and there's a lot of stuff on the table right now," Cooley said. "Ultimately we just want that perfect mix of businesses for the area."

The building was constructed in 1911 by Bohemian immigrant Wenzel Friedl. The bottom two floors housed the bakery while workers and the family lived on the third floor.

Friedl sold out to Peerless Baking Co. in 1917, which eventually became the Campbell Baking Co. The business moved across the street to a new larger bakery in 1927, which became a Wonder Bread and Hostess brands bakery and now the SingleSpeed brewery and taproom.

The original Friedl bakery had lost its historic integrity over the years as the ground floor was carved up into laundromat, flower store and rotating mix of retail establishments. More than 25 small efficiency apartments were created on the upper floors, which generated a history of police service calls.

It had been vacant for several years before Hoppenworth and Cooley, who had partnered on several smaller projects, saw its potential.

They  got the building listed on the National Register of Historic Places, applied for historic tax credits, secured a mortgage and signed a development agreement with the city. Much of the interior of the building has been gutted, uncovering the original white brick on the interior bakery walls.

Levi Architecture has developed plans for the restoration, which includes replacing 103 windows — even those that had been bricked over — and restoring the original storefronts.

Peters Construction Corp. is ready to begin framing the eight two-bedroom and four one-bedroom apartments, which will range in size from 750 to 1,200 square feet on the top floors. An elevator is also in the plans.

Hoppenworth said they are working to incorporate as much of the historic fabric of the building as possible, especially on the third floor which had served as residential units since it was built.

The project is also getting a boost from the overall efforts by the city and Waterloo Development Corp. to revitalize that area of downtown. Second Street, along the side of the building, is under reconstruction, and a major streetscaping project is fixing up Commercial and Jefferson streets from the Cedar Valley TechWorks campus to the RiverLoop area.

Both men said they appreciated the support and encouragement from the city, which provided incentives and helped them find the state and federal tax credit programs that made the renovation possible.

"That's the only reason projects like this are feasible," Hoppenworth said.

I spent weeks watching these baby birds, from the time they came out of their eggs until the day they flew away. Being able to go back to the same spot over and over to watch them grow and capture different moments was really something special.

One of my favorite things to do is walk around the neighborhoods of Waterloo and Cedar Falls and see how the community members are spending their days. When I saw Jason sitting on his front porch, playing his guitar I knew that I needed to stop and capture that moment. It can be someone playing a guitar, going fishing, or walking their dogs, the small moments that make up people’s lives can make some of the best photographs.

I spent the entire day at Irish Fest and by time Gaelic Storm hit the stage, I was about ready to hit the hay. I was looking for something different than the ordinary concert photo and spent an hour behind stage waiting for the perfect moment to capture the shadow in the frame. I was happy that I went outside of my comfort zone and took a risk to get a different photo.

One of my first assignments when I started working at the Waterloo Cedar Falls Courier was Christmas on Main in Waverly. After I was finished photographing I picked up the phone to call my family to tell them how absolutely magical the event was. I was able to photograph the event again this year and seeing the way the children and their families light up as they walk passed the windows is one thing that makes the Christmas season special.

This is one of those photos that just brings a smile to my face every time I look at it. I expect to see children sledding down snow hills in the winter time, but being able to capture a grandmother sledding with her dog is one of those moments that you don't easily forget. The saying "the right place at the right time" sums up this photograph perfectly.

WATERLOO — One of the city’s first production bakeries will be renovated to house businesses and upscale loft apartments.

WATERLOO — A $2.5 million renovation of the downtown Webberking Building received a boost from a state historic preservation tax credit program.

Grant will fix up 'hidden gem' at Greenbelt Lake

A $200,000 REAP grant will begin fixing up Greenbelt Lake, which was created along Martin Road in the 1970s from excavation to build flood levees.

The Iowa Credit Union League believes the prospect of winning a cash prize would help more Iowans save money and is pushing legislation allowing prize-linked savings in the state.

Developers Kade Hoppenworth and Dan Cooley stand in the building they are renovating at 300 Commercial Street in Waterloo on Tuesday afternoon.

The second flood being renovated at 300 Commercial Street in Waterloo on Tuesday afternoon.

This rendering from Levi Architecture shows how the original Friedl bakery on the corner of Commercial and West Second streets in downtown Waterloo will look when it is restored.