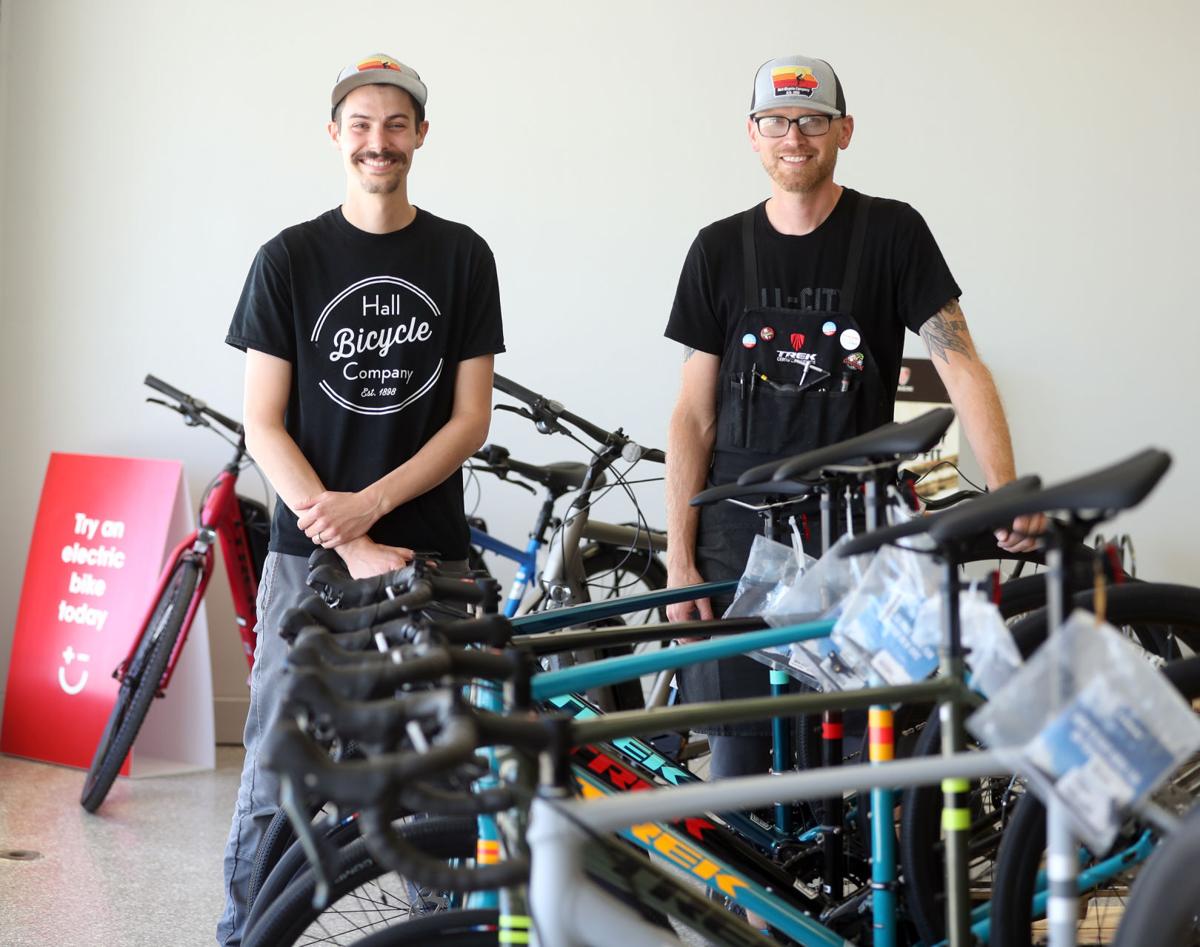 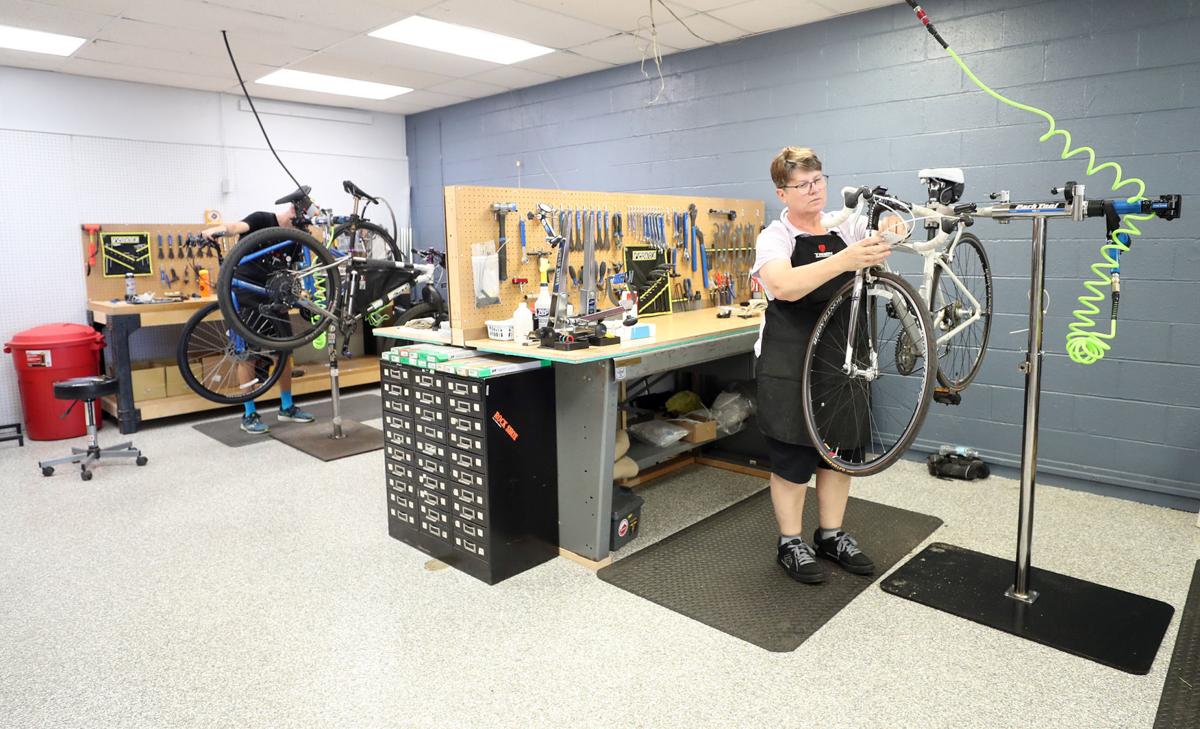 Julie Pauley and Joe Hackenmiller work on bicycles in the service department of Hall Bicycle Co. on Monday in Cedar Falls. 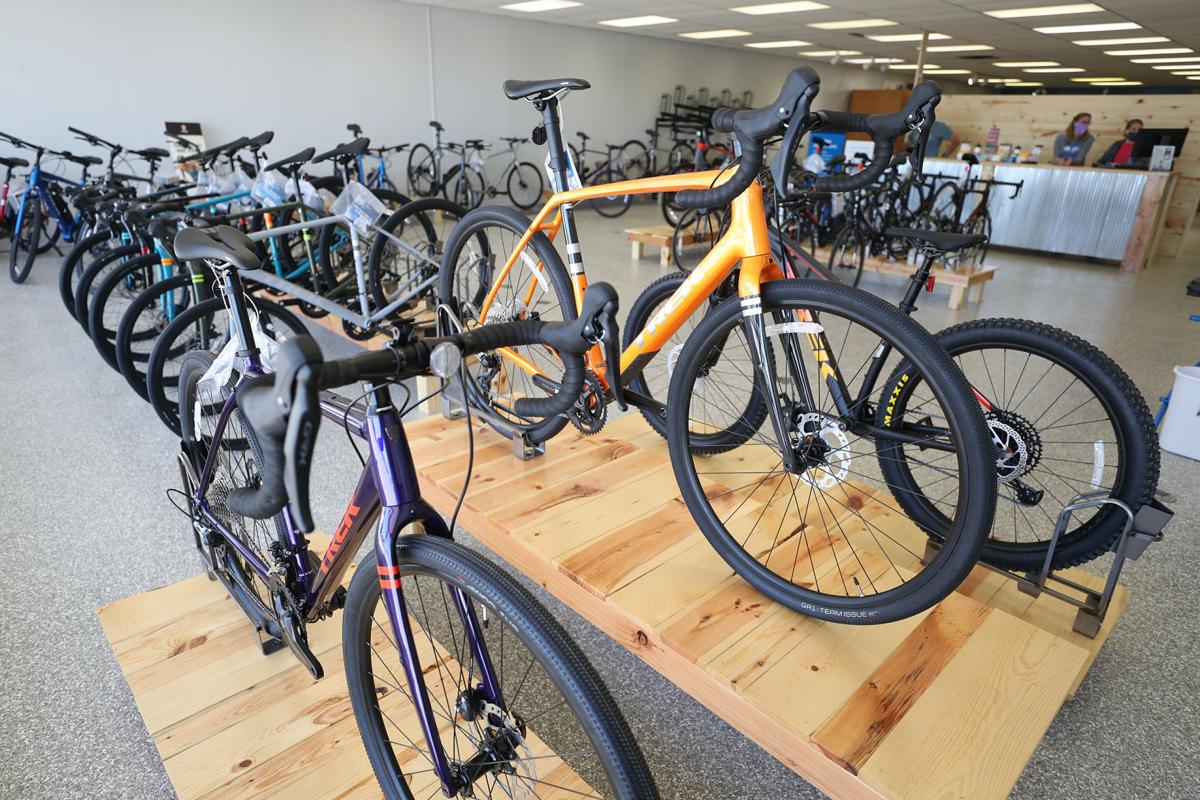 New bikes on display at Hall Bicycle Co. in June in Cedar Falls.

CEDAR FALLS — A new bicycle shop is filling the void left when a longtime store closed at the end of last year.

“We’ve been looking at expanding for quite awhile,” said Moscrip, whose bike shop has been a Cedar Rapids staple for 122 years. The Cedar Valley is “definitely one of the places we’d looked at for awhile.”

Since both Hall and Europa were Trek bicycle retailers, that limited the ability of Moscrip to open a shop here. A certain number of stores are authorized to sell Trek in a region. So, Europa’s departure created an opportunity for him.

“The big thing is Cedar Falls-Waterloo area is just a really great riding community, lot of cyclists,” noted Moscrip, who recently took ownership of Hall Bicycle Co., the fourth generation of his family to run it. “It just kind of made sense for us as a business.”

His company is also filling the void in a more literal way. Its shop is in the same location that Europa was for 27 years, at 4302 University Ave. in the Goodwill Center.

“We looked at a number of different locations,” said Moscrip, but “fell for this location and space.” With 6,200 square feet on one level, the company has abundant showroom space compared to its similar-sized downtown Cedar Rapids building on three levels. Moving into the Cedar Falls store “just kind of worked out.”

“The majority of people working here are previous Europa employees,” he noted.

“I’m glad we’re here. I think it was the right call to be in this location,” added Hackenmiller. With both downtown areas served by bike shops, people have told him they appreciate the ongoing presence of another option along the University Avenue corridor.

“Basically, we are continuing our business plan, kind of what we do best,” said Moscrip, with no ski-related sales expected. They will carry similar products as in Cedar Rapids. That includes Electra as well as Trek bicycles.

Europa, which started as bicycle-only shop in 1972, was purchased by Russ Clarke in 1987. Six years later, Alpine Ski & Patio merged with with his shop.

It opened as Europa Cycle & Ski on Jan. 2, 1993, at the University Avenue address, which was a new location for the business. Clarke announced the store’s closure on its Facebook page.

Hackenmiller said the shop’s staff “knew somebody was interested” in Europa’s soon-to-be vacant space, but not who it was. Upon finding out Hall Bicycle Co. would be moving in, he contacted Moscrip. Hackenmiller once worked for a competing Cedar Rapids-area bike shop and first met his new boss four years ago when they were both on a committee planning a bike race.

Moscrip announced plans to expand to Cedar Falls in February and started preparing the new location. But emergence of the coronavirus in Iowa delayed the company’s plans.

“We definitely postponed opening the showroom by about eight weeks,” said Moscrip. “It’s a different opening than we envisioned.”

Hackenmiller called it a “really, really crazy year thus far.” Work got underway on the facility before it was opened to the public, but people kept contacting the store about making purchases and receiving services – some of whom didn’t know about Europa’s closure. So, staff started making appointments for people to stop in while work on the building progressed, which continued until showroom doors were officially opened May 11.

“Not necessarily the way we had hoped to open up, but it’s been pretty successful so far,” he said.

Ingenious ways to earn income from your property

Ingenious ways to earn income from your property

Reasons opening a Health Savings Account (HSA) will save you

Reasons opening a Health Savings Account (HSA) will save you

Powers Manufacturing Co. has switched from making sportswear to hospital gowns to aid the local fight against COVID-19.

Julie Pauley and Joe Hackenmiller work on bicycles in the service department of Hall Bicycle Co. on Monday in Cedar Falls.

New bikes on display at Hall Bicycle Co. in June in Cedar Falls.