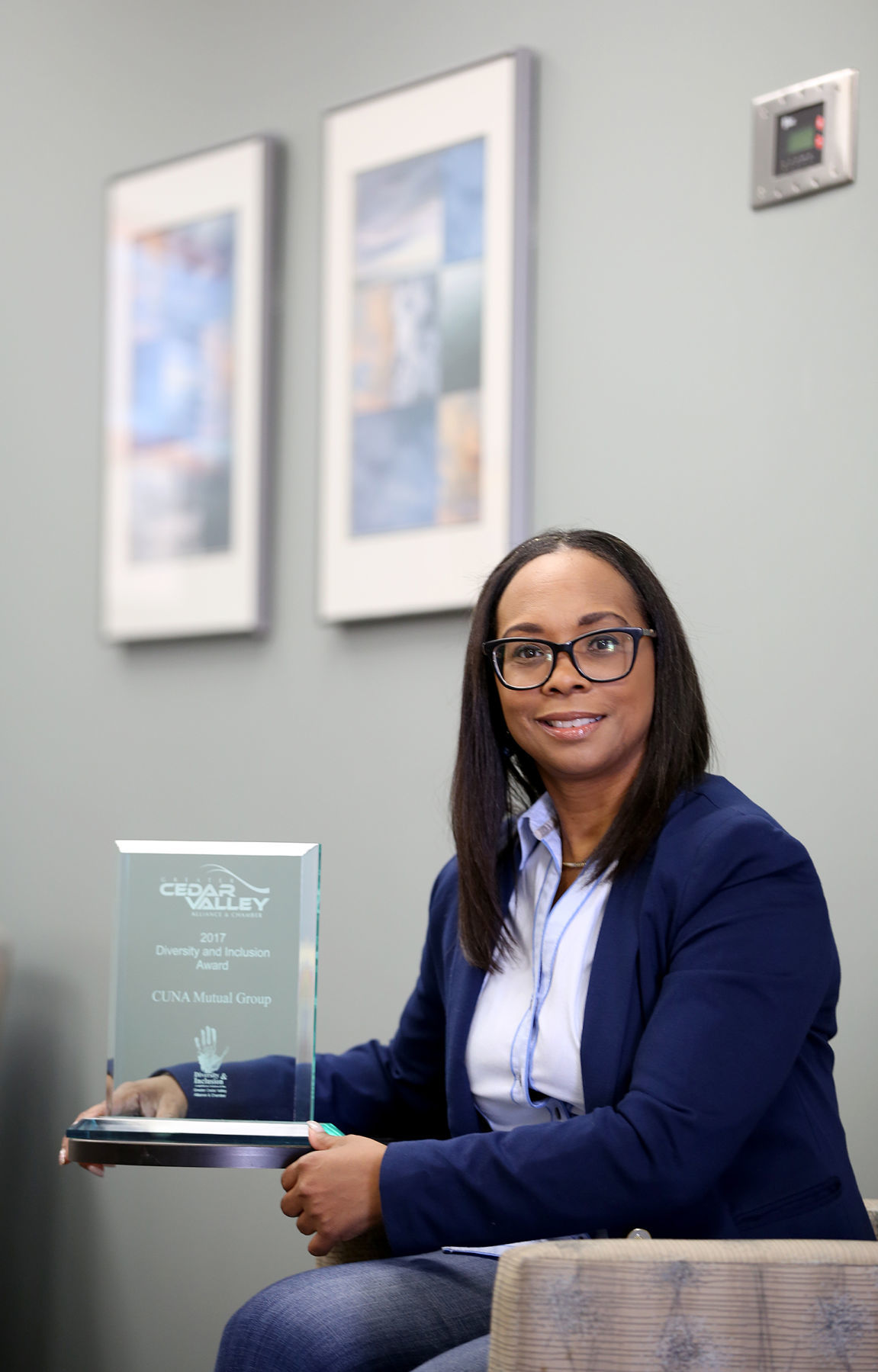 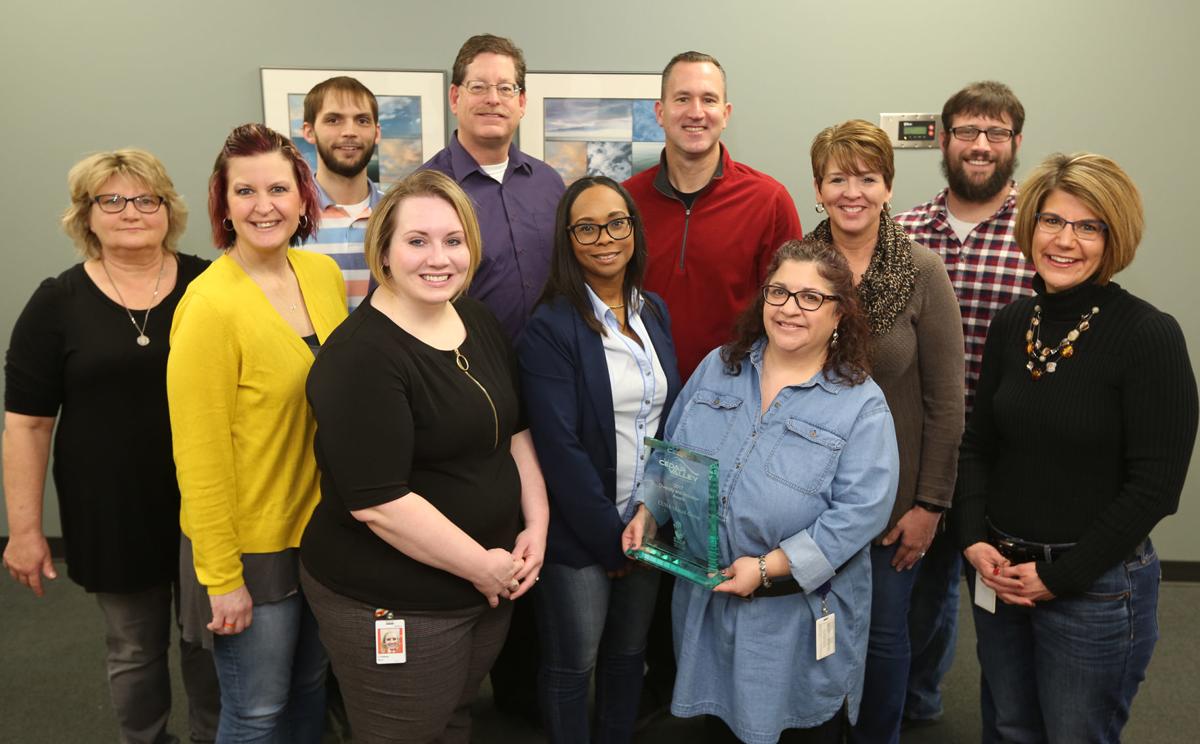 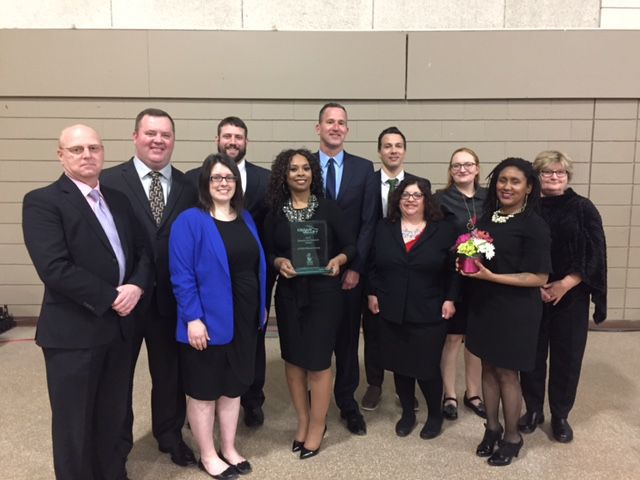 Sharina Sallis, center, poses for a photo with a group of CUNA Mutual Group employees after receiving an award from the Cedar Valley Chamber last year.

Second in a series of articles reprinted from the Spring 2018 Inclusion magazine, highlighting the inclusiveness of the Cedar Valley.

WAVERLY — When Sharina Sallis started her job at CUNA Mutual Group in 2005, she was one of only two employees of color in the entire 500-person Waverly office. Back then, diversity was a buzzword, a feel-good mantra, and not something anyone with a prominent position in the company cared to actually put teeth behind.

So Sallis started putting her own teeth into a diversity initiative in 2010 by going to conferences and starting a Diversity and Inclusion Committee at her office after getting buy-in from senior executives.

The committee began hosting a multicultural fair, featuring organizations most of her co-workers hadn’t heard of, and developed its first cultural inclusion event, “Cricket in the Courtyard,” for the office’s Indian employees to share their favorite pastime.

In 2014, when Bob Trunzo became the eighth president and CEO of CUNA Mutual, Sallis finally got the corporate buy-in on diversity she had been hoping for.

“He added inclusion to our overall corporate values,” said Angela Russell, vice president of diversity and inclusion of CUNA Mutual, based in Madison, Wis. “He made that clear, where CUNA Mutual would be a place where all employees could contribute and be valued.”

Russell said Trunzo’s model was employee diversity training, hiring a more diverse workforce that reflected the population (Sallis said there were now 15 nonwhite employees in her office) and promoting women and others into what was previously a male-dominated leadership structure.

CUNA Mutual also raised its corporate equality index, a measurement of LGBT inclusiveness by the Human Rights Campaign, from 50 in 2015 to a perfect 100 score the past two years.

Because of its diversity initiative, CUNA Mutual was honored with the Diversity and Inclusion Award in the large business category during the Cedar Valley Alliance and Chamber’s awards banquet in March 2017.

“CUNA continues to be actively involved in this GCVAC initiative and has contributed content for best business practices for Diversity and Inclusion,” said Lisa Skubal, who oversees the Diversity and Inclusion Partnership award process with the Alliance and Chamber. She noted the company helped the Alliance and Chamber create a toolkit for other businesses to use here: www.cedarvalleyalliance.com/cms/380/Diversity-Inclusion-Toolkit.

Russell noted CUNA Mutual was far from perfect. She said, for example, there was still a “disconnect” between employee training sessions and their day-to-day work, as well as correcting people’s subconscious biases and allowing employees to be “fully themselves” instead of making them assimilate to the default culture.

“How do we create an environment where all employees feel they can thrive and do their best work? That’s where equity comes into play,” she said. “I still think that we have a long way to go, but we’re on the path.”

Sallis agreed there was still progress to be made, but she’s happy there’s finally progress.

“I look at where we had started and how far we have come — I think we have taken significant steps,” she said. “We are conscious, we are intentional and we are doing this work to change the environment and make sure it’s sustainable so that it will be woven into the fabric of our company.”

CEDAR FALLS — A new, large furniture store has quietly opened at the end of one of the toughest years for businesses, but company officials sa…

Sharina Sallis, center, poses for a photo with a group of CUNA Mutual Group employees after receiving an award from the Cedar Valley Chamber last year.