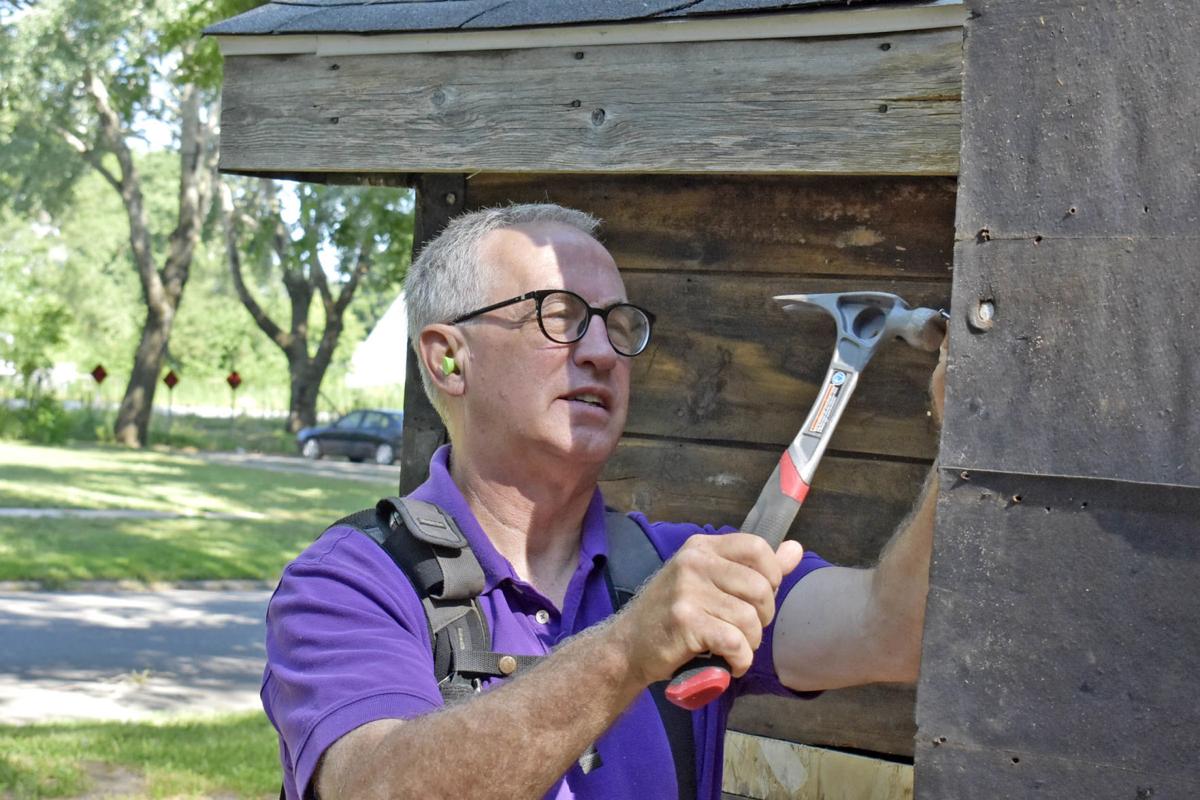 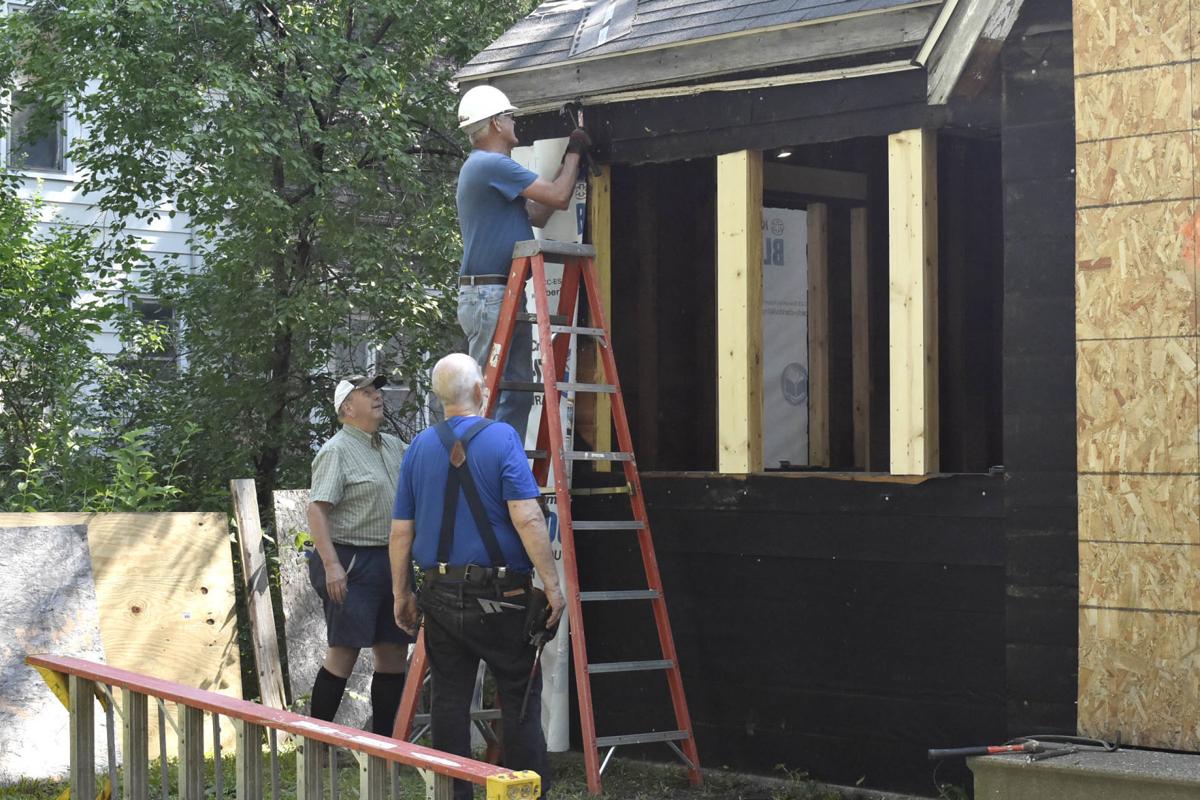 Naz Builders David Spake and Don Lilleskov are spotters for Dell Carpenter as he works atop a ladder at the Walnut Neighborhood cottage rehab for Habitat for Humanity in Waterloo. 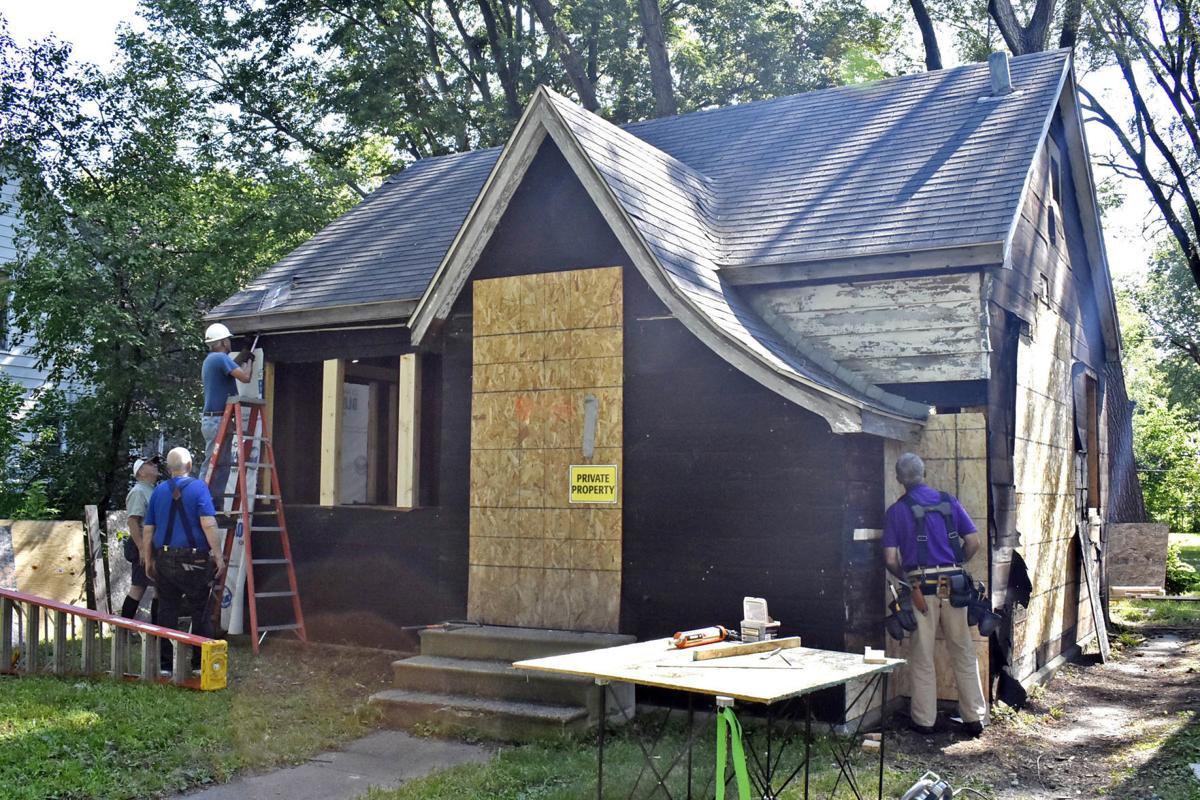 The one-bedroom cottage at 314 Clay St., Waterloo, was derelict before Habitat for Humanity acquired it. 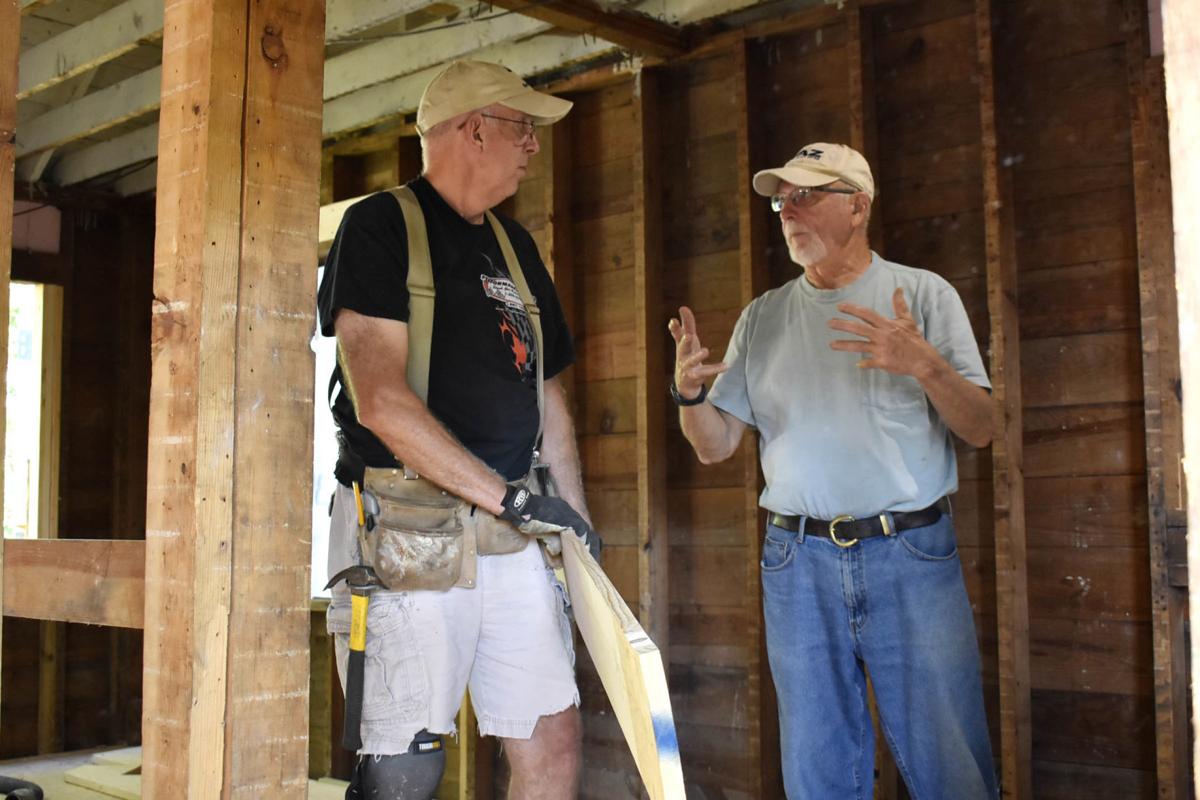 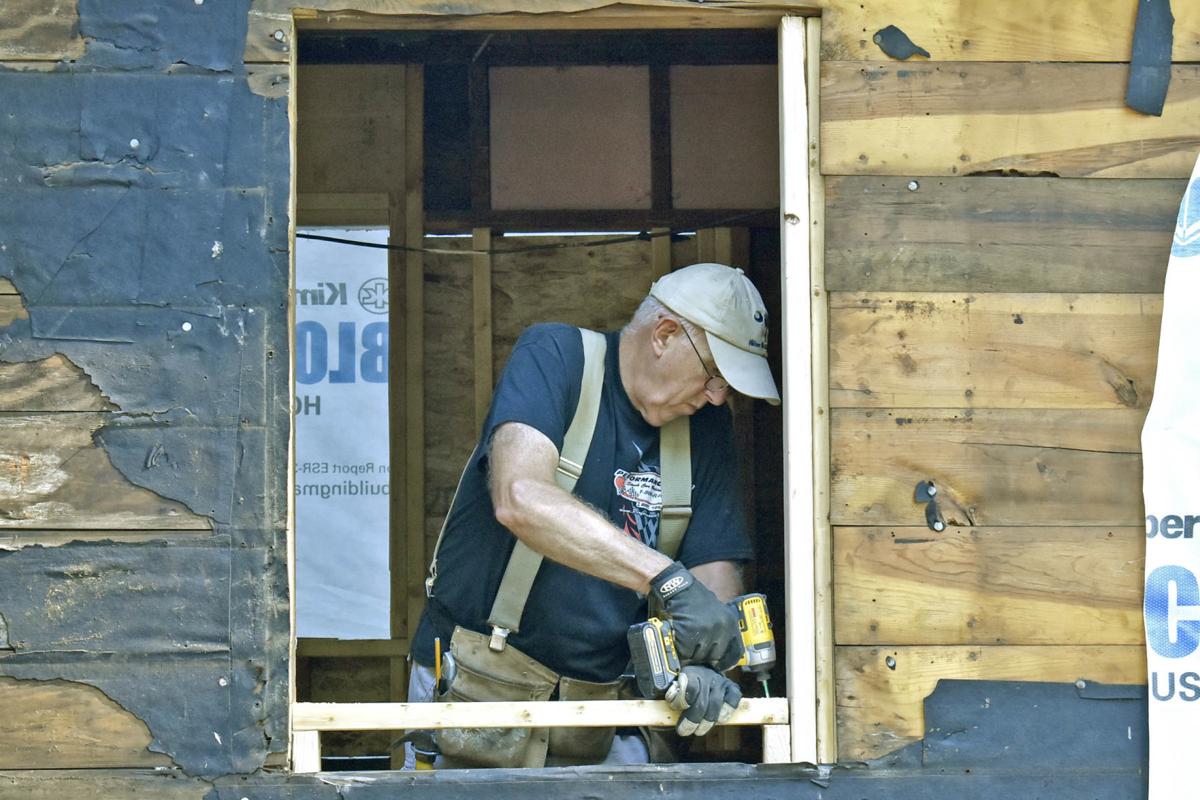 John Larson, a member of the volunteer group Naz Builders, drills into a window frame at 314 Clay St., Waterloo.

What most impressed me about the Naz Builders, beyond their obvious skills as carpenters and contractors, was their willingness to offer a helping hand to build not just a Habitat for Humanity house, but a community.

WATERLOO – On a crystal clear Monday morning, the industrious sounds of banging hammers and whirring power saws were a sure sign the Naz Builders were on the job.

The volunteers from Nazareth Lutheran Church in Cedar Falls are spending the summer renovating a Habitat for Humanity property at 314 Clay St. in the historic Walnut Neighborhood.

Work began on the one-bedroom 1930s-era cottage about four weeks ago, said Lloyd Dove of Cedar Falls. He worked in the construction business for 40 years before retiring. Through Naz Builders, he is doing something that he loves, along with helping the community.

“Usually it’s a group of 12 to 14 guys who show up to work. Some come as needed or when they have time, but some are involved for the whole project so there is some cohesiveness,” Dove said.

Dove and Hank Wellnitz act as project managers. “Hank and I figure out what has to be done. We put together a pre-punch list so when a guy asks, ‘Whaddya want me to do?’ We can tell him,” Dove said. “There’s a lot of good fellowship among the volunteers, and we like giving each other a hard time.”

Wellnitz, who is retired from Omega Cabinets, has worked on more than 100 Habitat projects. He described this project as “interesting because it is small but complicated. We have to bring it up to code, and it’s a very small space so we can’t have lot of people working at one time.”

For more than 10 years, decaying houses have been demolished in the neighborhood. Other homes are falling into disrepair. Revitalization is underway with Iowa Heartland Habitat for Humanity playing a significant role.

Executive Director Ali Parrish said Habitat has partnered with 12 low-income owner-occupants to make home repairs, as well as rehabbing homes and selling them to new Habitat home buyers. Plans are to build or rehab 12 additional vacant properties over the next three years.

Volunteers like Naz Builders allows Habitat to rehab homes at a lower cost, then sell the homes closer to cost. Funds are reinvested in more neighborhood housing projects.

Nazareth Lutheran Church volunteers worked on their first Habitat house in 1990. The congregation also sponsored houses in 1998-99 on Independence Avenue and on Western Avenue in 2017.

Naz Builders was formed by Wellnitz to assist with rebuilding in Louisiana after Hurricane Katrina in 2005. When those projects ended, the volunteers worked on churches in communities like Tripoli, West Union and Dubuque. In 2015, Naz Builders renovated and remodeled the Habitat for Humanity ReStore on Hammond Avenue.

“We like to get our hands dirty for the cause of Christ,” Dove said.

The Clay Street home and its mirror image next door at 312 Clay St., are two blighted homes Habitat has acquired in the Walnut Neighborhood. Habitat had already gutted the houses, so Naz Builders set to work at 314 Clay St. They have installed a new floor in the house, shored up supports in the basement, framed the main floor, built a new basement staircase, framed windows, moved a kitchen window and removed exterior aluminum siding and beneath it, a layer of wood siding.

“You can see signs of a house fire at some point because there is some scorching, and you can see the repairs that were made,” Dove noted.

Volunteer David Spake pulled out a plank of discarded cedar siding and pointed to a faded label. “The original siding came from a Canadian company,” said Spake of Cedar Falls. “When you start on a project like this, with a derelict house, you find some interesting things, and it never looks pretty in the beginning. But it turns out looking good. I’m happy we’re keeping the character of the neighborhood.”

Ed Bailey enjoys being a carpenter on the project. “I do what I can to help. It’s nice to do this work for people when you don’t have to worry about profit or loss. You’re making sure it’s done correctly and enjoying the work,” said Bailey of Cedar Falls. He is a retired Iowa Department of Transportation building inspector.

Volunteering with Naz Builders gives him a sense of accomplishment. “It’s tangible,” he said.

“A lot of this is wanting to give back to the community. The Lord has blessed us, and we want to share those blessings with other people,” Dove said. “It gives us retired guys a purpose to get up in the morning, and people are happy to see us. Being there for other people, doing what we can, it’s a mission.”

Wellnitz agreed. “We want to help those who need a hand up. It’s a fun project, something we’re doing to the best of our ability so it looks and fits in the neighborhood like when it was first built back in the 1930s.”

WAVERLY — The Lions Club of Waverly is celebrating 75 years of service this year.

WATERLOO – Kamyar Enshayan, an area leader, researcher and educator on environmental issues, is urging Iowans to take another look at what it …

Classic appeal: No place like (old) home on Grout Tour

The welcome mat will be out for visitors at six homes during the annual Tour of Classic Homes. Funds raised provide for the upkeep of the Grout Museum's historic homes.

Woodworkers hang out, talk about their hobby, share techniques and show off their latest projects as members of the Cedar Valley Woodworkers Association.

Contractors volunteer to build Habitat for Humanity home in 5 weeks

Five weeks — that's the timeline local volunteer homebuilders and tradespeople have to build a Habitat for Humanity home in the Walnut Neighborhood.

Iowa Heartland Habitat for Humanity has purchased the vacant Walnut Street Baptist Church on behalf of the neighborhood, which hopes to save the historic structure from decay.

Melody Parker's most memorable stories for 2019

Naz Builders David Spake and Don Lilleskov are spotters for Dell Carpenter as he works atop a ladder at the Walnut Neighborhood cottage rehab for Habitat for Humanity in Waterloo.

The one-bedroom cottage at 314 Clay St., Waterloo, was derelict before Habitat for Humanity acquired it.

John Larson, a member of the volunteer group Naz Builders, drills into a window frame at 314 Clay St., Waterloo.