Become a Member
Read Today's E-edition
Share This
CBD is illegal. Why can I buy it?
2 comments
Share this
Amie Rivers

WATERLOO — That CBD you bought legally at a reputable business in town is illegal — and if you’re busted with it you’ll face a charge the same as if you were carrying a bag of marijuana in your pocket.

But it seems everywhere you turn, stores around the Cedar Valley are promoting CBD products anyone can buy — even without a state-approved medical cannabidiol card.

“CBD can help!” declares a flier for Natural Native CBD, found at Family Video on East First and Franklin streets. The products include oil, spray, gummy bears and even bottled water, and though there’s a disclaimer they’re not FDA approved, the flier claims CBD can “help with” medical conditions like “anxiety/stress,” “insomnia” and “joint pain and inflammation.”

At Bed Bath and Beyond in Waterloo, customers can purchase products like CBD-infused essential oils, a Brookstone CBD oil-infused pillow and a pain-relief cream from Hempvana that says on the package it “contains no detectable THC or CBD” and “complies with federal law.” THC is the shorthand for tetrahydrocannabinol, the chemical most responsible for marijuana’s psychoactive effects.

There’s even a CBD vending machine in Cedar Falls, opened by the company PharmaXtracts in April on College Hill. KWWL characterized the products being sold as “totally legal” and “removed of THC.”

But these products aren’t legal in Iowa. They’re not even legal under federal law, despite the 2018 farm bill seemingly opening up the CBD marketplace.

“At the end of the day it’s illegal, whether you agree with it or not,” he said.

That’s backed up by Iowa Attorney General Thomas Miller, who put out a memo in July to “clarify the legal status of CBD products.”

“Because CBD is derived from parts of the cannabis plant that are included in definition of marijuana, CBD is considered marijuana under Iowa law,” Miller said in the memo. “Iowa law places both marijuana and its psychoactive component, tetrahydrocannabinol (THC), in Schedule I of the Uniform Controlled Substances Act. ... Consequently, any product containing any amount of CBD or any amount of THC is classified as a Schedule I controlled substance under Iowa law.” 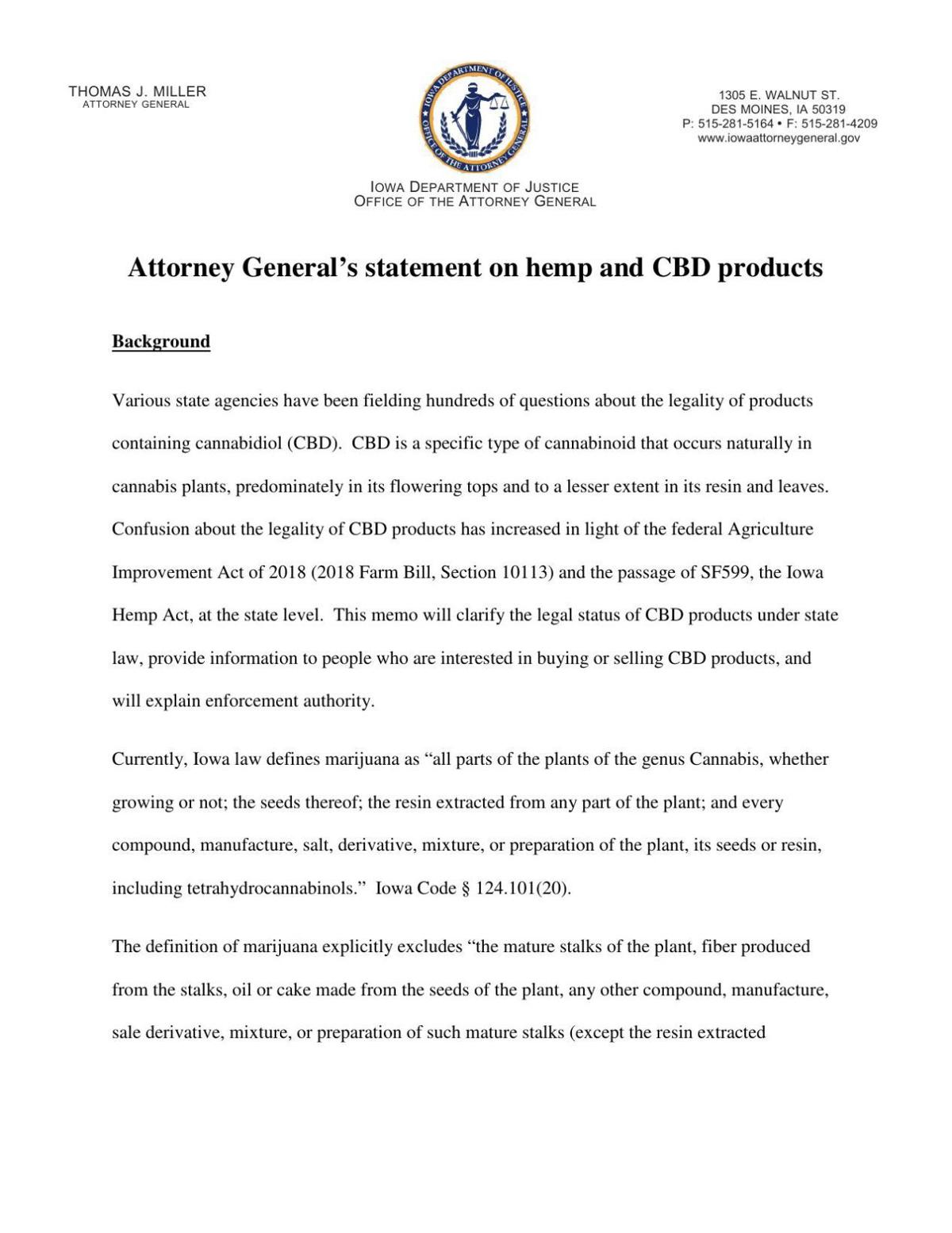 The only exception, Miller noted, are CBD products manufactured and sold under the Iowa Medical Cannabidiol Act, only available at five state dispensaries, one of which is in Waterloo, and only with a physician’s approval.

“One of the stark differences between our product and what can be purchased in local stores is the rigorous product testing that our product undergoes,” said Doug Bosswick, acting general manager of Iowa Relief, one of two legal state manufacturers of CBD. “The result is that consumers can trust that our products will deliver a safe and consistent experience for each patient who uses it.”

Williams said the wholesalers local stores buy from are using guidance on the law from the 2018 farm bill, a federal law that legalized hemp and removed its Schedule I designation, leading many to believe CBD was thus legalized.

However, the Food and Drug Administration clarified in January that the farm bill didn’t change the fact the FDA still “prohibits the introduction of CBD products into the food supply and dietary supplements even if they are hemp-derived.”

But area stores continue to sell CBD products to adults, advertising openly with signage, fliers and online advertisements like any other legal product, seemingly unaware such products are illegal.

Heather Bartelt, who owns Your CBD Store in downtown Cedar Falls, said “education is key” when she talks to her customers about CBD.

“Many people are looking for pain management or wanting to benefit their overall health,” she wrote in an email to The Courier. “Education is key and what is lacking.”

But she didn’t seem to know the CBD products she sells are illegal, saying the problem was actually “all the people and companies out there that are taking advantage of this unregulated marketplace by creating subpar and untested products.”

“I am confident in the CBD I carry,” she wrote. “They are transparent with their products, and their lab reports are coded on every bottle.”

That ongoing confusion from store owners is why law enforcement is in a sort of “holding pattern,” Williams said, not raiding stores or busting customers with CBD products.

“I mean, these folks have been told along the way that this is legal by somebody,” he said. “You can tell with the conversation you and I are having that it’s complicated.”

Basically, having a legally purchased CBD oil in your pocket — unless you also carry an Iowa Medical Cannabidiol card — is the same as carrying marijuana. Get busted and you’ll be slapped with a serious misdemeanor charge, punishable by up to a year in jail and a fine of several hundred dollars.

“These folks don’t know — the ones that are buying it and selling it and consuming it — they don’t know it’s illegal,” Williams said. “But it is, in fact, marijuana as currently defined by law.”

“Our main objective from the enforcement aspect is to notify people that are selling CBD, and to notify and educate people,” Williams said. “I’ve had a lot of people reach out to me, and they’ve been very decent. Some have pulled them off the shelves. Some are still confused.”

“Up to now, we have left these changing standards up to the (Tri-County Drug Enforcement) Task Force for the most part, unless we find oils or wax or other similar products during a search or traffic stop,” Thompson wrote in an email. “We don’t do, or haven’t done, business-related enforcement.”

“There are definitely ones that are selling CBD that are labeled as ‘no THC,’ but they would still come back (in lab tests) as marijuana,” he said. “A lot of this has been mislabeled.”

Things could change slightly by next year. The Iowa Hemp Act, signed into law in May by Gov. Kim Reynolds, would allow for CBD products with up to 0.3% THC, meaning some CBD products could become legal, Williams said. But the law is contingent upon the U.S. Dept. of Agriculture approving the plan. 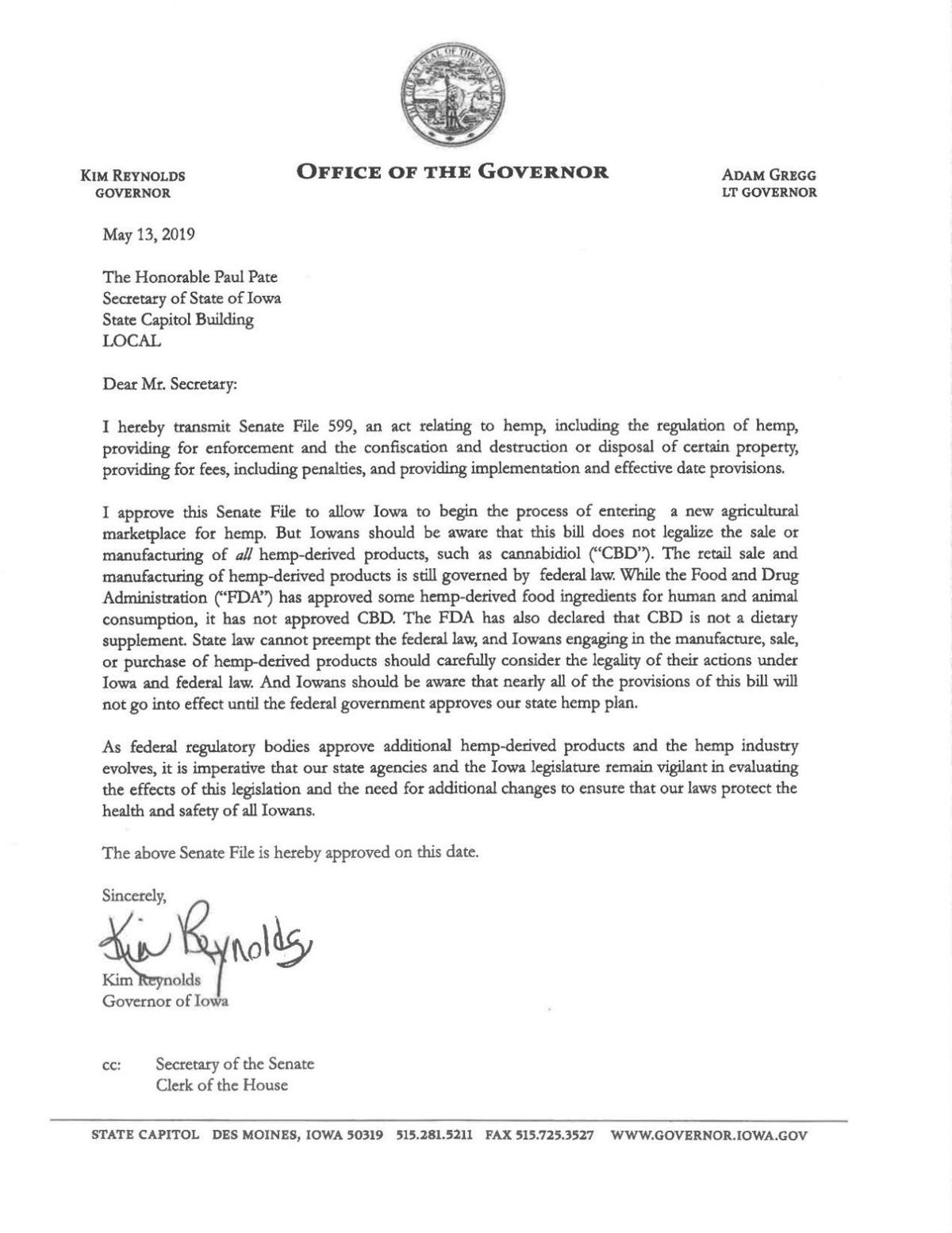 The bottom line, said Williams, is that while enforcement isn’t a priority, all CBD products — except those bought from the state’s five dispensaries — are still illegal in Black Hawk County, throughout Iowa, and technically across the United States.

“We want people to know that it’s illegal,” he said. “But that penalty only comes if there’s a knowing violation, and that comes back to why prosecution is not a priority.”

An Iowa state board recommended Friday that medical marijuana should be a prescription option for treating post-traumatic stress disorder and intellectual disability with aggression, but it rejected the drug for two other conditions petitioners had requested.

DES MOINES — Any product containing cannabidiol now is classified as a Schedule I controlled substance under Iowa law and is illegal, accordin…

With an historically large field of Democratic presidential candidates and a race that appears destined for a closely contested finish, campaign organization is poised to play a critical role in determining the outcome of this year’s Iowa caucuses.

WATERLOO — Winter landed on our doorsteps Monday with record snowfall, and bitter cold temperatures will follow.

At-Large Waterloo Councilman Steve Schmitt and Ward 4 Councilman Jerome Amos Jr. both got fined $20 for missing the Oct. 31 deadline to file campaign finance reports ahead of the Nov. 5 municipal election.

Julian Castro says he is committed to “speaking bluntly, and being bold and fearless” as he campaigns for support in Iowa’s first-in-the-nation presidential caucuses.

UNI partners with Shanghai University of Engineering and Science

University of Northern Iowa and China’s Shanghai University of Engineering and Science (SUES) are partnering to create a 2+2-degree program, allowing students to gain two years of educational experience in both China and the United States.

Visual artist to speak at UNI

Visual artist Justin Brice Guariglia will visit the University of Northern Iowa for a public talk on Wednesday, Nov. 13.

HCC will offer training to vets

On Monday, Kim Brown, owner of Inspired luncheonette in Readlyn, will be honored at the Iowa Events Center as the Iowa Restaurant Association’s Restaurant Neighbor Philanthropy Award winner.

Joe Biden secured the endorsement of a former fellow candidate.

What’s next for medical marijuana in Iowa

Before they joined Iowa’s medical marijuana program, Mary Roberts’ two children had long histories of taking multiple drugs, including some with “significant side effect profiles,” she recalled.

Days from the start of Illinois’ marijuana sales, questions have arisen for Iowa businesses over how to account for a potential increase in off-the-clock drug usage in workplace policies.

Unemployed military veterans will be some of the first Iowa farmers to plant a hemp crop this year, and will eventually train other Iowa farmers on their techniques, if Randy Hasstedt's plan comes to fruition. 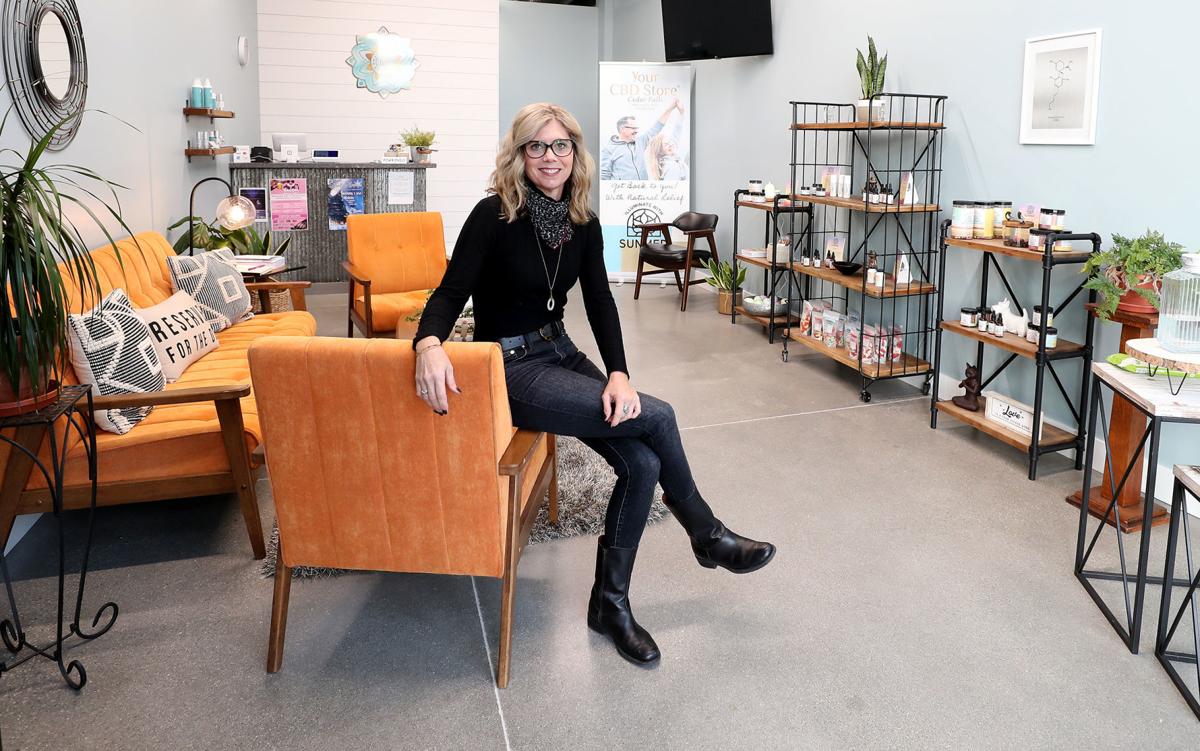 Heather Bartelt is owner of Your CBD Store in Cedar Falls. 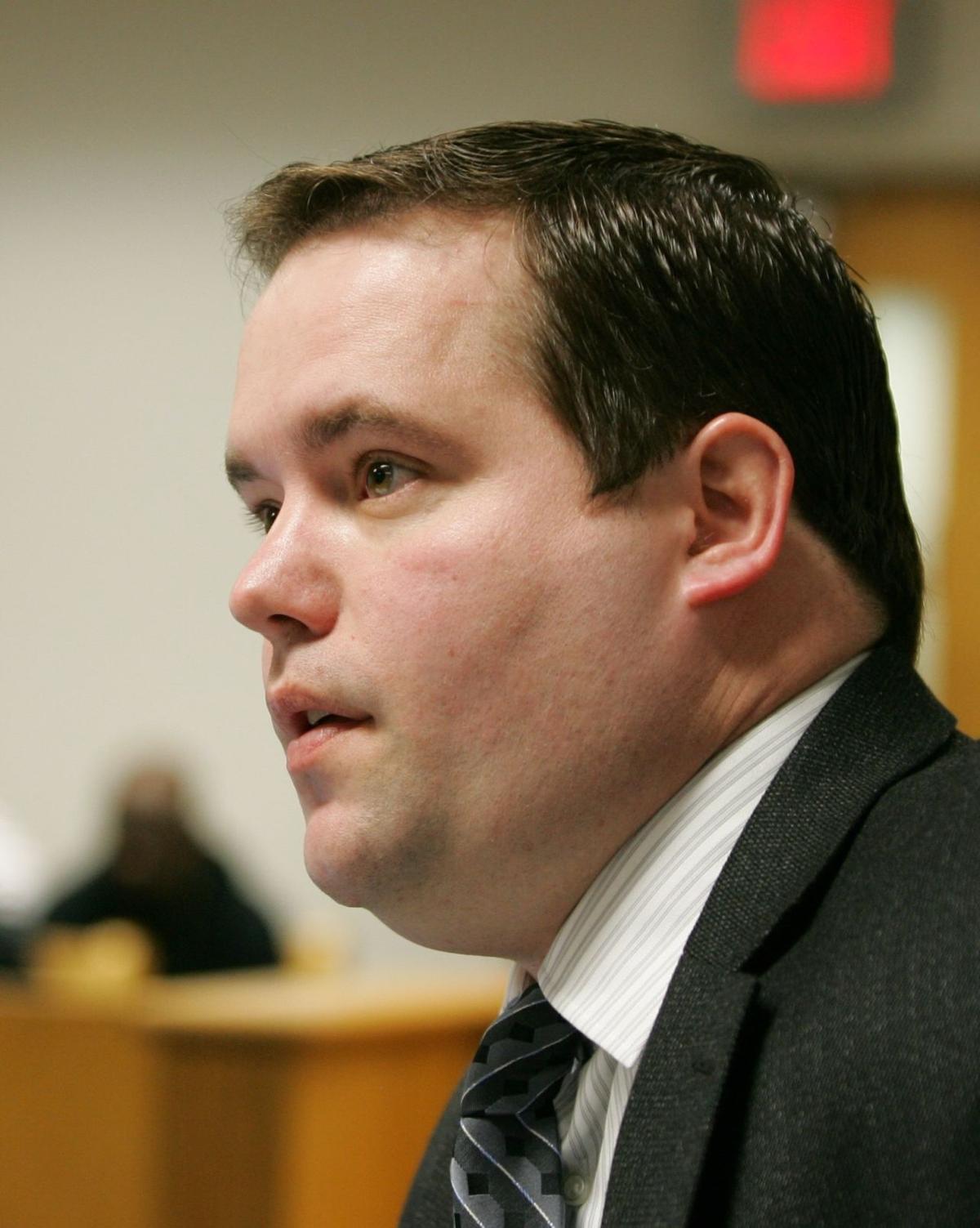 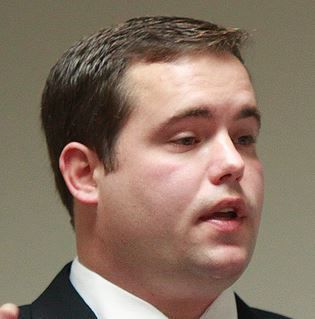