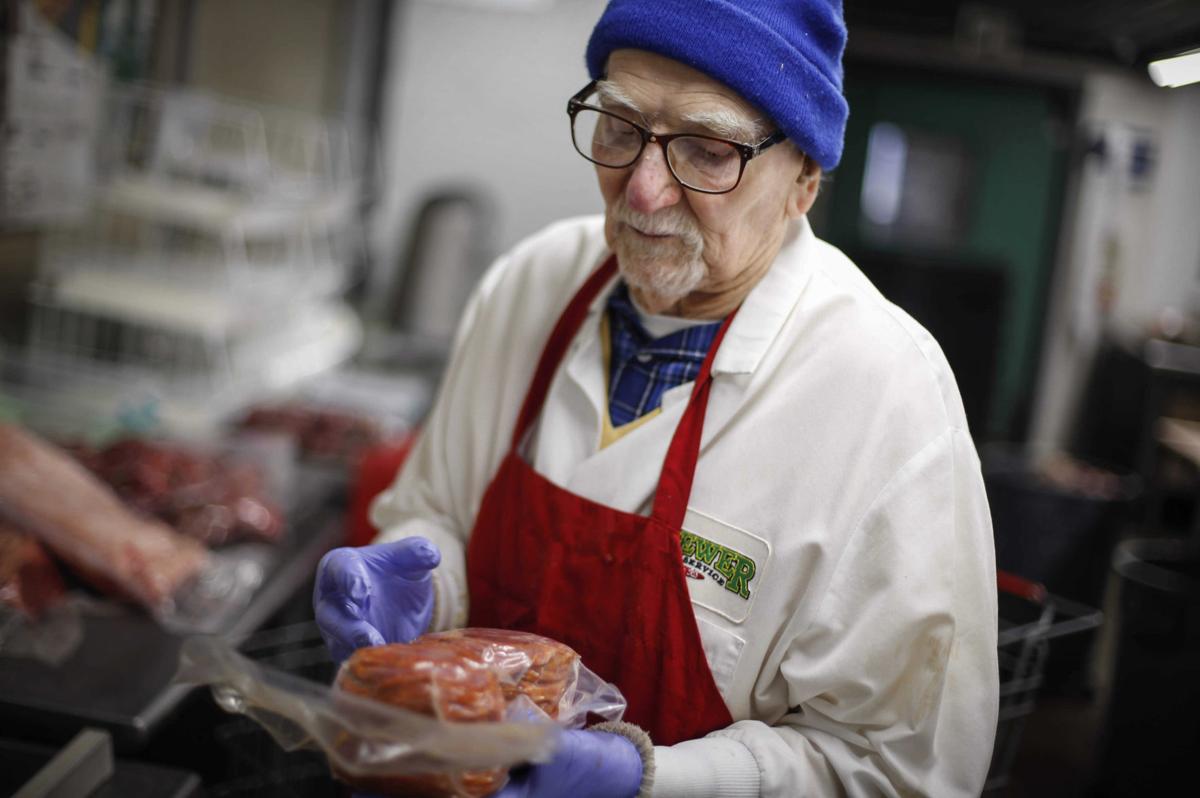 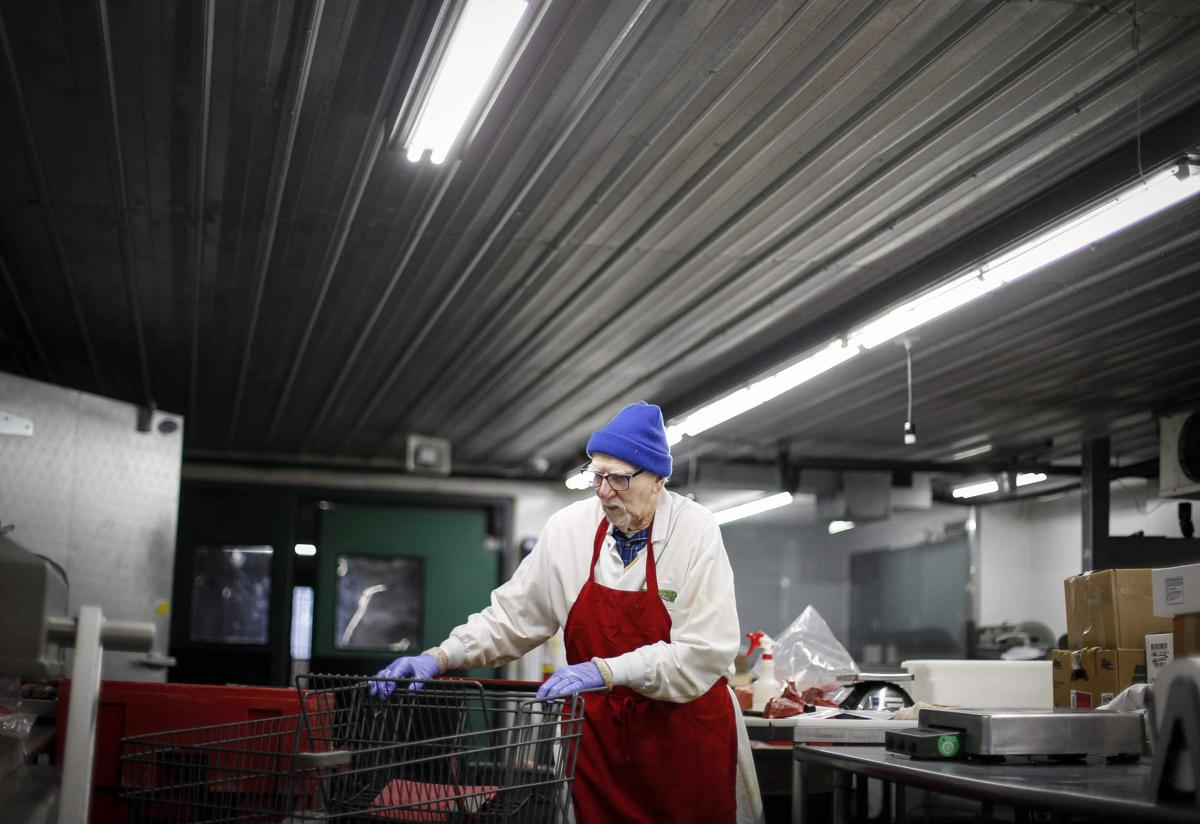 In this Jan. 10 photo, Bob Knudson, 95, works in the meat locker at Brewer Meats in Des Moines, Iowa. He’s celebrating his 15th year at Brewer Meats, a company that provides premium meat cuts to restaurants and events in the metro.

Mark it down. Count on it. It’s a bet so safe, Vegas wouldn’t put it on the board.

Knudson is 95 years old, a World War II veteran, a widower and, maybe above all else, a worker.

He’s celebrating his 15th year at Brewer Meats, a south Des Moines company that provides premium meat cuts to restaurants and events in the metro area.

Knudson is a meat cutter. He arrives at 6 a.m. sharp each day and cuts meat until 1 p.m.

He doesn’t stop for lunch.

“He can take a break,” Barber told The Des Moines Register. “He just doesn’t want to.”

Bob Knudson was born in Mason City, the son of a greenhouse manager and a homemaker.

As a sophomore in high school, Knudson got a job building tents at Mason City Tent and Awning.

“The war was on, and everybody was expected to pitch in,” he said. “My buddies and I all got jobs sewing tents for the military.”

Knudson graduated from Mason City High School in 1944 and, at 18, joined the Navy.

He was colorblind and couldn’t read the signal flags between ships. The Navy transferred him to the Seabees, the nickname of the Navy’s legendary construction battalions.

“It beat the heck out of living on some ship in the ocean,” Knudson said.

Knudson served from 1944 to 1946 in the Pacific theater. One of the tents he lived in came from Mason City Tent and Awning.

He built camps, walls, bridges, docks and all manners of projects.

Knudson worked in units with men in their 20s or older. They were mostly professional construction workers, plumbers and others.

“I was the low man in terms of age and experience,” Knudson said. “They taught me how to do everything right. And they led me astray a few times.”

The men introduced him to booze.

“I learned to drink all kinds of strange things that I wasn’t used to drinking,” Knudson said. “They learned to mix up some pretty strong stuff in the Navy.”

Knudson discharged from the Navy and enrolled at Drake University.

One day he spotted a “terrific looking blonde walking across campus,” he said, “and I said, ‘She’s for me,’ and luckily, I was right.”

The woman was Geneva Cowden. The couple would be together for 66 years until her death in 2016 at age 88.

Their marriage produced a daughter and two sons.

Knudson earned a degree in business. He went to work for a company that produced mechanical parts and industrial hand soap in Corydon in 1950.

The company eventually moved to Des Moines; Knudson was part owner when he sold out in 1981.

He bought himself a new business, the former Valley Bait and Grocery on George Flagg Parkway, and ran it for 24 years.

While there, Knudson got to know the workers at Brewer Meats, who stopped by in the afternoons for sandwiches and pop.

He made friends with Barber, the owner, who offered him a job if he ever needed one.

Knudson sold the shop in 2005. It looked as if he might finally try retirement.

He repeated that about four times.

“Not working was not for me,” Knudson said.

He called up Barber and took him up on his offer.

Knudson became a meat slicer and a darned good one, too.

“He puts us all to shame,” said Barber, who is 70. “Meat slicing can just ruin your arm and shoulder, but it never seems to bother Bob. He never complains.”

Brewer employs about 22 people. Many have hard, backbreaking work and cherish their midday breaks and lunches.

“I try to get the younger guys to look at Bob and see the value in hard work,” Barber said. “I don’t know if they understand the lesson, though.”

For Barber, Knudson is an American hero. Not only did Knudson serve in World War II in a critical role, but he’s never shied away from a day’s work.

When Kundson’s wife died in 2016, Barber called him and told him to take the day off.

And so he did.

Knudson has no plans to retire. He likes his job. About four years ago, it got a little easier.

Barber invested in a high-tech slicing machine that slices and stacks for the operator. It saves Knudson’s shoulder.

But it wasn’t as if he ever complained.

“The man just likes to work,” Barber said. “He values it. You don’t run into people who value work the way he does. That’s why I call him a hero.”

VGM Group has committed to the presenting sponsorship for RAGBRAI when it makes an overnight stop in Waterloo on July 22.

Individuals and business awards winners to be honored March 31.

Allen expanding use of telemedicine

More than 20 years ago, Bob Breitbach and Eric Christensen launched a new Dubuque business in an emerging but little-known industry.

Skills in science, technology, engineering and math will be put to the test at the upcoming Iowa Science Olympiad, held at the University of Northern Iowa on March 7.

In this Jan. 10 photo, Bob Knudson, 95, works in the meat locker at Brewer Meats in Des Moines, Iowa. He’s celebrating his 15th year at Brewer Meats, a company that provides premium meat cuts to restaurants and events in the metro.