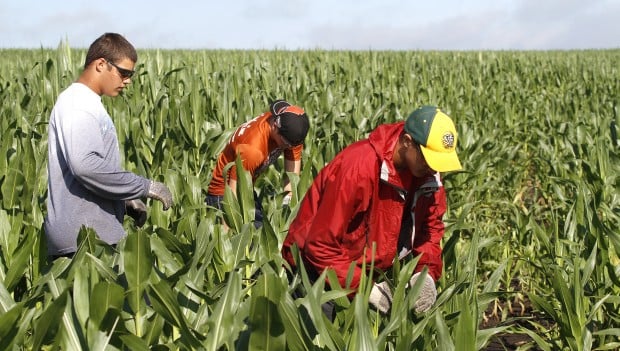 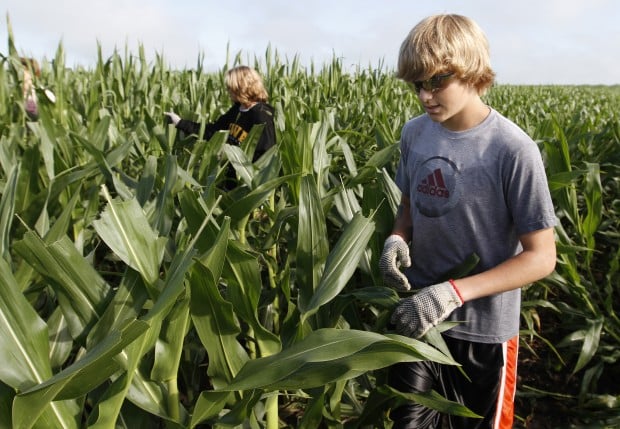 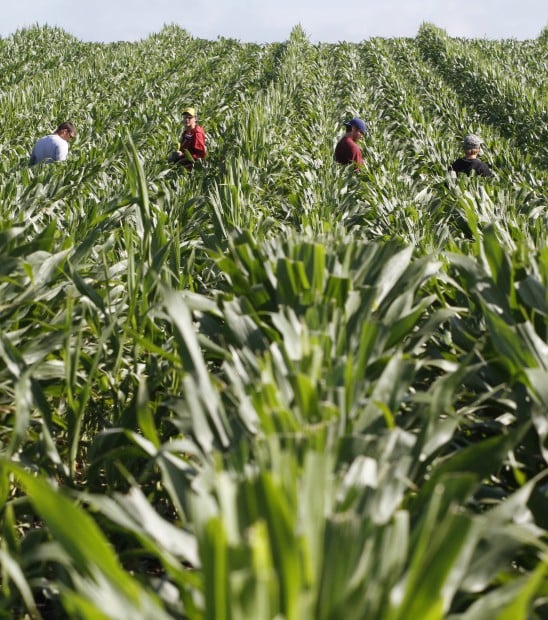 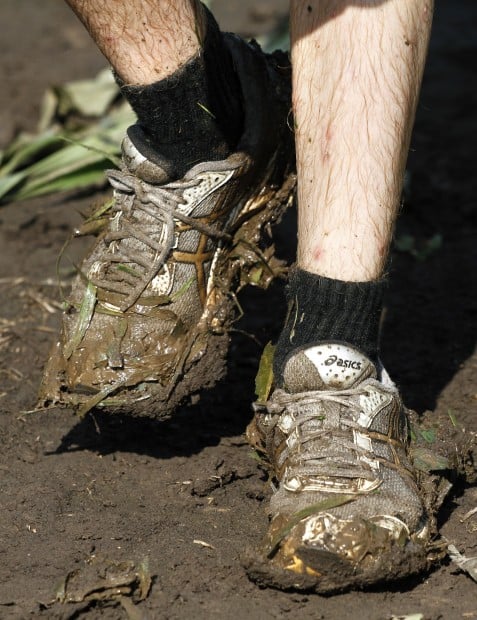 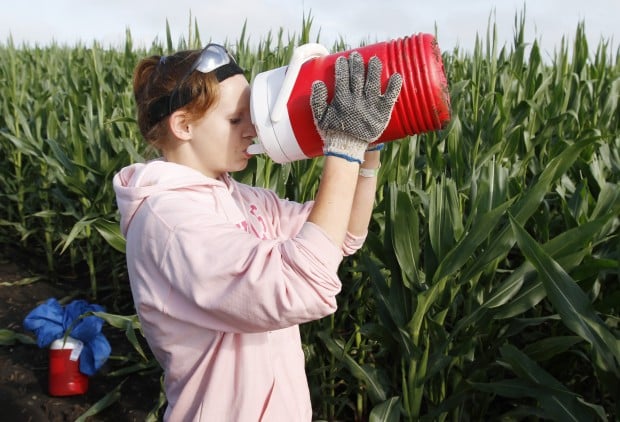 REINBECK - Detasseling, like heat and humidity, is a summertime tradition in Iowa.

Practically every Iowan has heard of it and knows when it starts. Even though school's out, buses filled with kids - sans baseball and softball gloves - and some adults travel the countryside, and port a-potties suddenly appear in seed cornfields.

From the road, it looks like kids walk into the corn like in "Field of Dreams" and just disappear. Thousands of Northeast Iowa youths temporarily trade summer vacation for three weeks of hard labor. Mud, steamy weather and unrelenting mosquitoes can accompany the job - sometimes simultaneously.

It's no secret that detasseling can be miserable. Seed company officials and those in the fields say most Iowans know little about the process, why it's done and how important it is to the local economy.

"People don't have a clue," said Rhett Barrett, a full-time teacher and coach in Denver, who also runs a detasseling crew for Pioneer Hi-Bred International. "Even some of the kids (detaselling) don't realize the importance of what they have in their hand."

During social and business functions, Barrett and Pioneer officials say people are often amazed at what it takes to create new and improved corn hybrids each year.

Corn has both male and female parts. The tassel is the male and silk on the ear is the female. In a commercial cornfield, only one hybrid is planted and pollen falls from the tassel on the silk, which promotes kernel and ear development.

Seed companies create new corn hybrids by planting more than one variety in a field. Tassels are removed from one hybrid, but left on another to promote cross-pollination. The idea is to take the best traits from one type of corn and combine them with the best traits of another. For example, one variety might yield well while another is more drought-resistant and is known for strong roots. The new hybrid would have all three.

Pioneer started detasseling on July 3 near Reinbeck. Company officials declined to give specific figures this year, but in 2009 officials said the Reinbeck facility - one of 19 nationwide - processed 850,000 units of corn grown on nearly 12,000 acres.

Cutting and tassel-pulling machines make one pass each before humans take to the fields. Tassels need to disappear from four out of every five rows. Sixty to 90 percent are removed mechanically. Machines could be set lower to get them all, but corn isn't all the same height, and too much of the plant would be removed in many cases, interfering with photosynthesis - the process of turning sunlight into food.

"Think of a plant as a factory," said Colby Entriken, Reinbeck plant manager. "The more leaves that are removed, the less productive it will be."

Detasselers then walk every field at least twice, checking every plant. If a tassel or even a hint of one is found, it's pulled off by hand.

During a good day, which typically lasts seven to 12 hours, Barrett said his crew that normally consists of 60 to 70 teenagers can cover up to 200 acres.

The Reinbeck facility started detasseling July 3, about 10 days earlier than the last couple of years. The earlier start bodes well for workers and the company.

Except for wet conditions, detasselers say they're beating the extreme heat that usually hits later this month and early August. Pioneer officials expect an earlier harvest, estimated to be Aug. 25. That should be before frost hits, which has nipped yields the past two years.

Pioneer hires about 30,000 detasselers a year in North America. About 825 serve the Reinbeck facility.

Without detasselers, producing enough seed would be a struggle. Iowa is the nation's leading corn producer, totalling more than 2.4 billion bushels last year. The crop was worth more than $9 billion, according to government statistics.

"(Detasselers) have a very important job that's crucial to our customers," Snider said.

For those walking the fields, detasseling can be a tough, uncomfortable job. Only severe weather, like tornados and lighting, keep detasselers home. Crews even worked on the Fourth of July.

But workers say it's worth the reward.

Pioneer pays detasseling crew leaders like Barrett an undisclosed amount per acre. Detasselers are paid per hour, ranging from more than minimum wage for rookies to $17 to $20 per hour for experienced workers. Plus, bonuses are given for performance, safety and attendance.

"We're out here because the money is good," said Barrett, a 16-year veteran.

With shoes caked in mud, along with most of her body, 16-year-old Chelsea Matlack of Denver pulled tassels Tuesday in a field several miles southeast of Reinbeck.

She hates the mornings. Matlack is up hours before most other teenagers and, by 8 a.m., she's drenched from dew on corn leaves. Then, the heat and humidity sets in.

"You feel wet all day ... it stinks. At the end, you're just exhausted," Matlack said.

But she came back for a third year.

"I like getting that big check. I want to put it toward a truck, but probably it'll go for college," she said. "Maybe I'll spend a chunk and just go shopping."

Get your head in the Christmas shopping game early

Get your head in the Christmas shopping game early

Arielle Petersen takes a break for a drink while detasseling Tuesday, July 13, 2010, in Reinbeck, Iowa. (MATTHEW PUTNEY / Courier Photo Editor)
© Copyright 2021 The Courier, 100 E. 4th St. Waterloo,IA | Terms of Use | Privacy Policy | Do Not Sell My Info
Powered by BLOX Content Management System from TownNews.com.
You don't have any notifications.