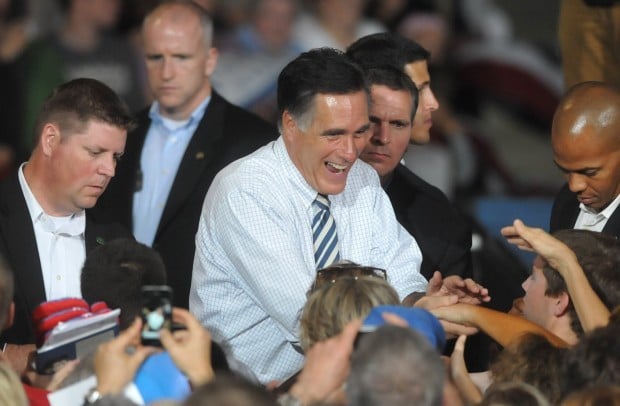 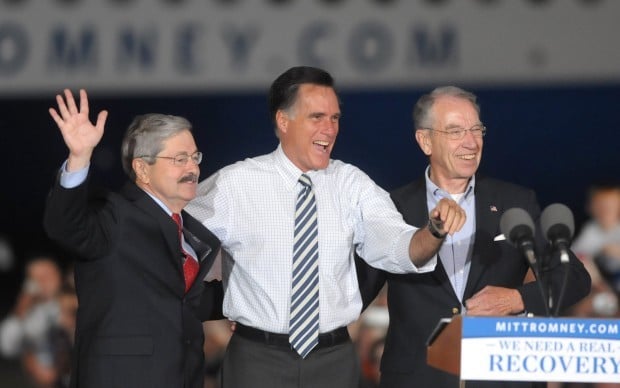 CEDAR RAPIDS, Iowa --- Although it wasn’t a rosy picture Mitt Romney painted – families struggling, an ailing economy and growing national debt while America’s stature in the world is declining – the Republican presidential candidate promised to lead an American comeback.

But “things are about to get better,” he said, promising hope to American families, seniors, students and workers and a change in government policy to help businesses grow and create jobs.

“We will rise to the challenge. We will take back America,” Romney pledged during an 18-minute pep talk to a high-energy audience that filled a Landmark Aviation hangar at The Eastern Iowa Airport.

Flanked by his “Believe in America” campaign jet, Romney told more than 2,000 supporters he’ll keep his commitment as long as they “find someone who voted for Barack Obama last time and make sure they vote for me this time.”

Given the president beat 2008 GOP nominee John McCain by 9.5 percentage points in Iowa, that’s a tall order. However, recent polls suggest it’s possible for Romney to carry the state. Toward that end, Romney will return to Iowa Friday for a rally at Kinzler Construction Services in Ames. Thursday, his son, Craig, and Florida Sen. Marco Rubio will campaign for him in Ankeny.

“The national debt just keeps going up and up,” he said, pointing to the national debt clock in the hangar. It was at $16 trillion and climbing. “In 2008, I heard Barack Obama say he would cut it in half, but it’s doubled.

“Once you’re in debt, you are a slave to that debt,” he said.

Romney promised to cut spending and balance the federal budget so people Janowski’s age aren’t picking up the tab for things they didn’t even buy.”

Romney said the Obama campaign slogan, “Forward,” should be changed to “Forewarned.” The economy isn’t moving forward for the 23 million unemployed Americans and the working families who are struggling to make ends meet, he said.

However, Democrats, who demonstrated outside the airport near where Romney supporters were catching buses to the rally, rejected the suggestion that Romney can fix what ails the American economy.

“A hedge fund capitalist doesn’t create jobs. He just makes a profit for his investors,” said Linn County Democratic Party Chairwoman Diane Hoffmann of Mount Vernon while other demonstrators chanted “four more years” and waved signs, including one that said: “We want a president, not a boss.”

Creating jobs is “what we need to get us going again,” said Rachel Hayes of Muscatine as she waited for Romney to arrive.

“Right now, we’re just doing OK, just limping along,” Hayes said. “President Obama has had four years to do it and I’m not impressed.”

Neither is Jaye Eves of Iowa City who is looking for a president “who acts like a president.”

“We’ve had a president for four years who’s done his own thing,” said Eves, who attended with her husband, Tony, and their two young children.

Although social issues are important to him, Tony thinks electing “businessman with a heart” will mean more jobs, more growth and a stronger economy.

The crowd, which was entertained by country singer Ricky Skaggs before Romney arrived, was fired up, interrupting the GOP nominee with chants of “Mitt, Mitt, Mitt” and “USA.”

Seizing on that sentiment, Romney promised to “do everything in my power to restore those principles that American has relied on to build a strong economy and to be the leader of the world.”